Pathway of the Epicritic Sensibility

Pathway of the Epicritic Sensibility

The nerve fibers transmitting impulses for the senses of touch, vibration, and joints origi-nate from neurons of the spinal ganglia (A1), while the fibers for face and sinuses stem from neurons of the trigeminal ganglion (Gasser’s ganglion, semilunar gan-glion) (A2) (1st neuron). Touch stimuli are transmitted by two types of fibers; thick,well-myelinated nerve fibers terminate atthe corpuscular end organs, while thin nervefibers terminate at hair follicles. The cen-tripetal axons of the neurons enter the spi-nal cord via the posterior root, with the thick myelinated fibers running through the medial portion of the root. They merge with the posterior funiculi (AB3) in such a way that the newly entering fibers border laterally; as a result, the sacral and lumbar fibers lie medially and the thoracic and cervical fibers laterally. The sacral, lum-bar, and thoracic bundles form the gracilefasciculus (Goll’s tract) (B4), while the cervi-cal fibers form the cuneate fasciculus (Bur-dach’s tract) (B5). 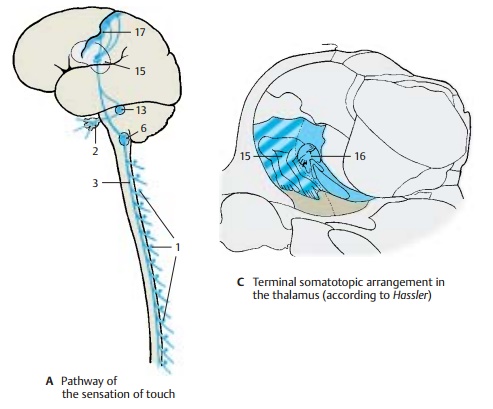 The primary fibers (gracile funiculus and cuneate funiculus) terminate in a corre-sponding arrangement on the neurons of the dorsal column nuclei (A6) (2nd neuron), gracile nucleus (B7), and cuneate nucleus(B8), which therefore exhibit the same so-matotopic arrangement as the posterior funiculi. Each neuron in the dorsal column nuclei receives its impulses from a specific type of receptor. The cutaneous supply area of a neuron is small in the distal segments of the limbs (hand, finger) but larger in the proximal segments. As electrophysiological studies have demonstrated, the neurons re-ceiving impulses from specific receptors show a somatotopic arrangement as well; close to the surface of the nuclei lie the neu-rons for the hair follicle receptors, in the middle those for the touch organs, and still deeper those for the vibration receptors.

Corticofugal fibers from the central region (precentral gyrus and postcentral gyrus) run via the corticospinal (pyramidal) tract to the dorsal column nuclei; fibers from thelower limb area of the central region termi-nate in the gracile nucleus, while fibers from the upper limb area terminate in the cuneate nucleus. The corticofugal fibers have a postsynaptic or presynaptic inhibi-tory effect on neurons of the dorsal column nuclei and therefore attenuate the incoming afferent impulses. Thus, the cortex is able to regulate in these relay nuclei the input of impulses coming from the periphery.

The secondary fibers ascending from the dorsal column nuclei (2nd neuron) form the medial lemniscus (B9). In the decussation of the medial lemnisci (B10) the fibers cross tothe opposite sides, with the fibers from the gracile nucleus lying ventrally and those from the cuneate nucleus lying dorsally. Later, the gracile fibers take a lateral posi-tion (B11) and the cuneate fibers take a me-dial position (B12). The secondary fibers from the trigeminal nuclei (B13), trigeminallemniscus, join the medial lemniscus at thelevel of the pons and become located dor-somedially to it in the midbrain (B14).

The medial lemniscus extends to the lateral part of the ventral posterior nucleus ofthalamus (AC15); the fibers of the gracilenucleus terminate laterally, while those of the cuneate nucleus terminate medially. The trigeminal fibers (C16) terminate in the medial part of the ventral posterior nucleus. This results in a somatotopic organization of the nucleus. The arrangement of fibers is preserved in the projections of the thalamocortical fibers (3rd neuron) to the cortex of the postcentral gyrus (A17) and forms the basis for the somatotopic organi-zation of the postcentral area.

Hence, the pathway of the epicritic sensibility consists of three neurons relayed in tandem, with a demonstrated somatotopic organization in each relay station and at the terminal station.