The common terminal pathway of all centers involved in motor activity is the large anterior horn cell (A1) and its axon (α-mo-toneuron), which innervates the voluntaryskeletal muscles.

The central regions that influence motor activity via descending pathways are inter-connected in many ways. The most impor-tant afferent pathways stem from the cere-bellum, which receives the impulses of muscle receptors via the spinocerebellartracts (A2) and the stimuli of the cortex viathe corticopontine tracts (A3). The cerebellar impulses are transmitted via the parvo-cellular part of the dentate nucleus (A4) and the ventral lateral nucleus of thalamus (A5) to the precentral cortex (area 4) (A6). The corticospinal (pyramidal) tract (A7) de-scends from area 4 to the anterior horn and gives off collaterals in the pons (A8) that re-turn to the cerebellum. Additional cerebel-lar impulses are transmitted via the em-boliform nucleus (A9) and the centromedian nucleus of the thalamus (A10) to the striatum(A11) and via the magnocellular part of the dentate nucleus (A12) to the red nucleus(A13). From here fibers run in the centraltegmental tract (A14) via the olive (A15) backto the cerebellum and in the rubroreticu-lospinal tract (A16) to the anterior horn.Fibers from the globose nucleus (A17) run to the interstitial nucleus of Cajal (A18) and from there in the interstitiospinal fasciculus(A19) to the anterior horn. Finally, cerebello-fugal fibers are relayed in thevestibular nu-clei (A20) and in the reticular formation (A21) to the vestibulospinal tract (A22) and the reticulospinal tract (A23), respectively. 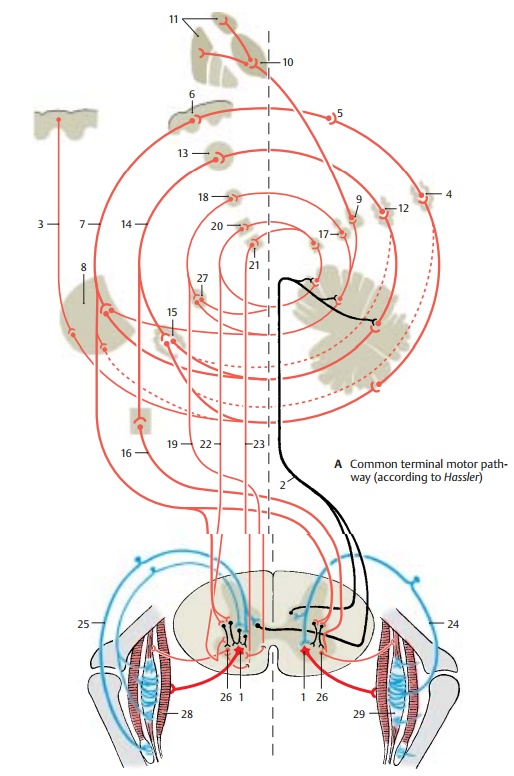 The descending pathways can be divided into two groups according to their effect on the muscles: one group stimulates the flexormuscles, and another group stimulates the extensor muscles. Thecorticospinal tractandthe rubroreticulospinal tract activate mainly the neurons of the flexor muscles and in-hibit the neurons of the extensor muscles. This corresponds to the functional impor-tance of the corticospinal tract for delicate and precise movements, especially those of hand and finger muscles where flexor muscles play an important role. In contrast, the fibers of the vestibulospinal tract and the fibers from the pontine reticular formation in-hibit the flexors and activate the extensors. They belong to a phylogenetically old motor system that is directed against the effect of gravity and, thus, is of special importance for body posture and balance.

The peripheral fibers that run through the posterior root into the anterior horn origi-nate from the muscle receptors.The afferent fibers of the annulospiral endings (A24) ter-minate with their collaterals directly on the α-motoneurons, while the fibers of the ten-don organs (A25) terminate on inter-neurons.Many descending pathways in-fluence the α-neurons via the spinal reflex apparatus. They terminate on the large α-neurons and on the small γ-neurons (A26). Since the γ-neurons have a lower threshold of stimulation, they are stimulated first, which results in the activation of muscle spindles. The latter send their impulses to the α-neurons. Thus, the γ-neurons and muscle spindles have a starter function for voluntary movements.