The elements nitrogen, phosphorus, arsenic, antimony and bismuth constitute 15th group of the periodic table. This group is called nitrogen group. These elements have the general electronic configuration ns2np3. All these elements have five electrons in their outermost orbitals. The `s' orbital contains two electrons and p orbital contains three electrons. These three electrons are equally distributed in three p-orbitals as px1 py1 pz1 which correspond to half-filled configuration.

As we go down the group, the two electrons present in the valence `s' orbital become inert and only the three electrons present in the outermost p-orbitals are involved in chemical combinations. This is known as inert pair effect. As we move from nitrogen to bismuth, the pentavalency becomes less pronounced while trivalency becomes more pronounced.

Nitrogen was discovered in 1772 by Daniel Rutherford, a Scottish physician and chemist. Elementary nitrogen constitutes three-fourths of air by weight. It is also abundant in the combined state as saltpetre (KNO3), sodium nitrate (chile saltpetre) and ammonium salts. Nitrogen is an essential constituent of all vegetable and animal proteins.

Method employed for fixation or bringing atmospheric nitrogen into combination:

A mixture of nitrogen and hydrogen in the ratio 1:3 under pressure (200-900 atm) is passed over a catalyst finely divided iron and molybdenum as promoter, heated to about 770K.

The ammonia so manufactured can be xidized to nitric oxide by passing a mixture of ammonia and air over heated platinum gauze at 1070K. Nitric oxide combines with more of oxygen to give nitrogen dioxide which when absorbed in water in the presence of excess of air, gives nitric acid (Ostwald's process).

Ammonia and nitric acid manufactured above may be converted into ammonium salts and nitrates suitable as fertilizers. Thus these methods of nitrogen fixation are of vital importance to the agriculturists.

Due to electrical disturbances atmospheric nitrogen and oxygen combine to give nitric oxide which gets further xidized to nitrogen dioxide. This reacts with rain water in the presence of excess of oxygen to produce nitric acid and is washed down to earth. Here it reacts with bases of the soil to give nitrates.

In addition to this, certain bacteria living in the nodules on roots of leguminous plants e.g. pea, beans etc., convert nitrogen into nitrogenous compounds which can be directly assimilated by the plant.

There is a continual turnover of nitrogen between the atmosphere, the soil, the sea and living organisms. The nitrogen passes from atmosphere to plants and animals, converted into useful products like ammonia, nitric acid etc. and still its percentage in the atmosphere remains practically unchanged. This is due to the fact that combined nitrogen is constantly passing back to the atmosphere. This cycle of changes involved is known as nitrogen cycle. 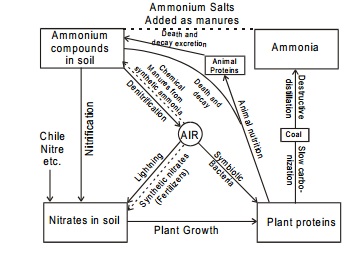 2.     Ammonia is used as a refrigerant in ice-plants.

4.     Nitrous oxide mixed with oxygen is used as anaesthetic for minor operations in dentistry and surgery.

5.     Nitrous acid is used in the manufacture of azo-dyes.

6.     Nitric acid is used in the manufacture of fertilizers, explosives like TNT, GTN, etc.

7.     Nitric acid is used in the purification of gold and silver.

8.     Nitric acid is used in pickling of stainless steel.

9.     Nitric acid is used in the manufacture of perfumes, artificial silk, medicines etc.

Nitric acid is prepared in the laboratory by heating a nitrate salt with concentrated sulphuric acid.

Vapours of nitric acid are condensed to a brown liquid in a receiver cooled under cold water. Dissolved oxides of nitrogen are removed by redistillation or blowing a current of carbondioxide or dry air through the warm acid.

Nitric acid is manufactured by blowing air into an electric arc struck between two water cooled copper electrodes and spread into a disc with the help of a magnetic field at right angle. The serious disadvantage of the method is now obsolete.

Large quantities of ammonia manufactured by Haber's process are converted into nitric acid by Ostwald's process.

1.     It is a colourless fuming liquid when pure, but may be coloured yellow by its dissociation products mainly nitrogen dioxide.

2.     It has extremely corrosive action on the skin and causes painful sores.