A liquid–liquid extraction is one of the most important separation techniques used in environmental, clinical, and industrial laboratories. Two examples from envi- ronmental analysis serve to illustrate its importance. Public drinking water supplies are routinely monitored for trihalomethanes (CHCl3, CHBrCl2, CHBr2Cl, and CHBr3) because of their known or suspected carcinogeneity. Before their analysis by gas chromatography, trihalomethanes are separated from their aqueous matrix by a liquid–liquid extraction using pentane.21 A liquid–liquid extraction is also used in screening orange juice for the presence of organophosphorous pesticides. A sample of orange juice is mixed with acetonitrite and filtered. Any organophospho- rous pesticides that might be present in the filtrate are extracted with petroleum ether before a gas chromatographic analysis.22

In a simple liquid–liquid extraction the solute is partitioned between two im- miscible phases. In most cases one of the phases is aqueous, and the other phase is an organic solvent such as diethyl ether or chloroform. Because the phases are im- miscible, they form two layers, with the denser phase on the bottom. The solute is initially present in one phase, but after extraction it is present in both phases. The efficiency of a liquid–liquid extraction is determined by the equilibrium constant for the solute’s partitioning between the two phases. Extraction efficiency is also in- fluenced by any secondary reactions involving the solute. Examples of secondary re- actions include acid–base and complexation equilibria.

Earlier we learned that the partitioning of a solute between two phases is described by a partition coefficient. If the solute is initially in an aqueous phase and is ex- tracted into an organic phase*

A large value for KD indicates that the extraction of the solute into the organic phase is favorable.

This distinction between KD and D is important. The partition coefficient is an equilibrium constant and has a fixed value for the solute’s partitioning between the two phases. The value of the distribution ratio, however, changes with solution con- ditions if the relative amounts of forms A and B change. If we know the equilibrium reactions taking place within each phase and between the phases, we can derive an algebraic relationship between KD and D.

Liquid–Liquid Extraction with No Secondary Reactions

In the simplest form of liquid–liquid extraction, the only reaction affecting extrac- tion efficiency, is the partitioning of the solute between the two phases (Figure 7.20). In this case the distribution ratio and the partition coefficient are equal. 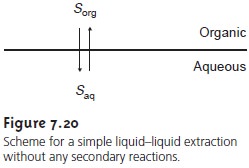 whereas the solute’s concentration in the organic phase is

where Vaq and Vorg are the volumes of the aqueous and organic phases. Solving equation 7.20 for (moles org)1 and substituting into equation 7.22 leave us with

Rearranging and solving for the fraction of solute remaining in the aqueous phase after one extraction, (qaq)1, gives

The fraction present in the organic phase after one extraction, (qorg)1, is

The fraction present in the organic phase after one extraction, (qorg)1, is

Example 7.14 shows how equation 7.24 is used to calculate the efficiency of a simple liquid–liquid extraction. 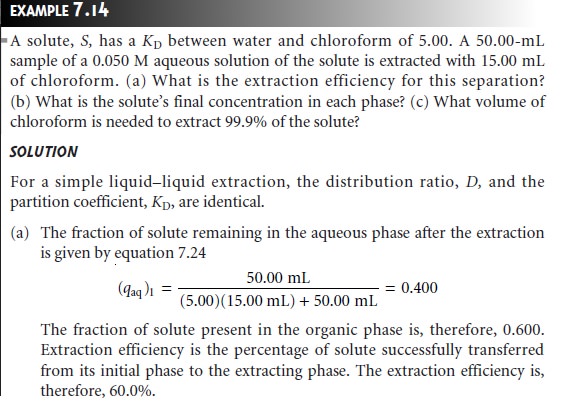 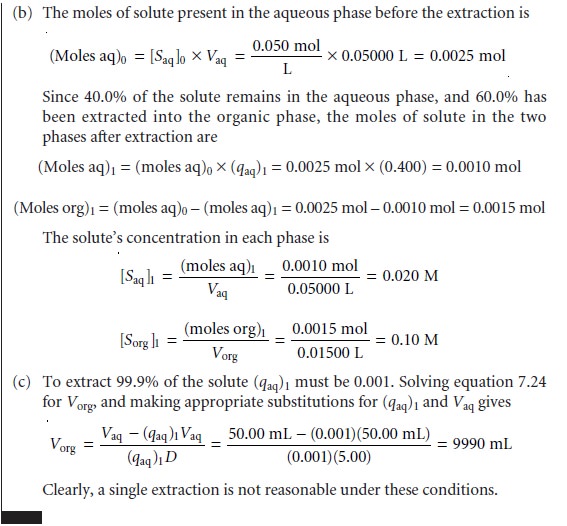 In Example 7.14 a single extraction results in an extraction efficiency of only 60%. If a second extraction is carried out, the fraction of solute remaining in the aqueous phase, (qaq)2, is given by

If the volumes of the aqueous and organic layers are the same for both extractions, then the cumulative fraction of solute remaining in the aqueous layer after two ex- tractions, (Qaq)2, is

In general, for a series of n identical extractions, the fraction of analyte remaining in the aqueous phase after the last extraction is 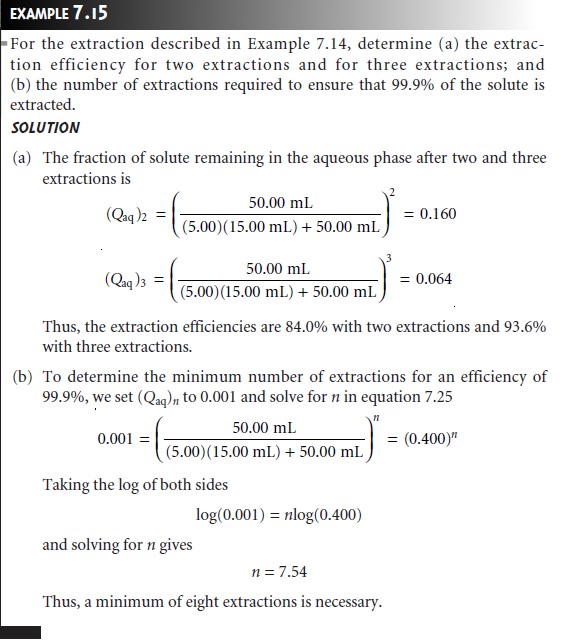 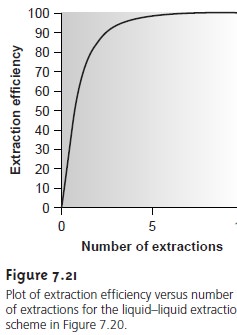 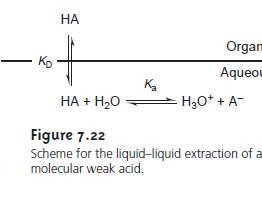 Since the position of an acid–base equilibrium depends on the pH, the distribution ratio must also be pH-dependent. To derive an equation for D showing this depen- dency, we begin with the acid dissociation constant for HA. 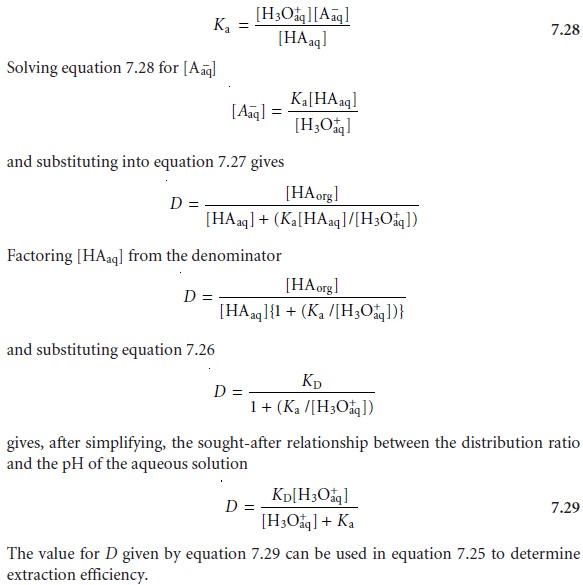 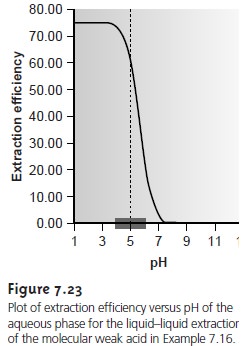 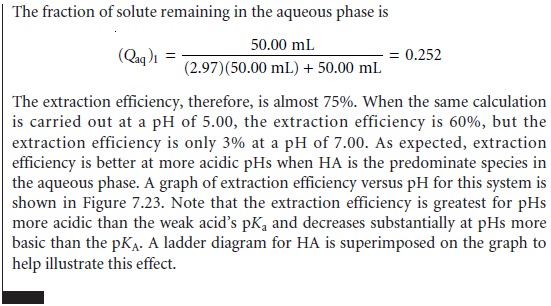 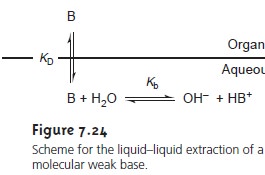 The same approach can be used to derive an equation for the distri- bution ratio when the solute is a molecular weak base, B, (Figure 7.24). The resulting distribution ratio is

where Ka is the acid dissociation constant for the weak base’s conjugate weak acid.

One of the most common applications of a liquid–liquid extraction is the selective extraction of metal ions using a chelating agent. Unfor- tunately, many chelating agents have a limited solubility in water or are subject to hydrolysis or air oxidation in aqueous solutions. For these reasons the chelating agent is added to the organic solvent in- stead of the aqueous phase. The chelating agent is extracted into the aqueous phase, where it reacts to form a stable metal–ligand complex with the metal ion. The metal–ligand complex is then extracted into the organic phase. A summary of the relevant equilibria is shown in Figure 7.25. 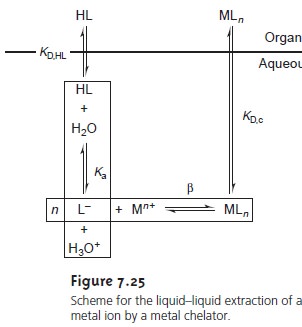 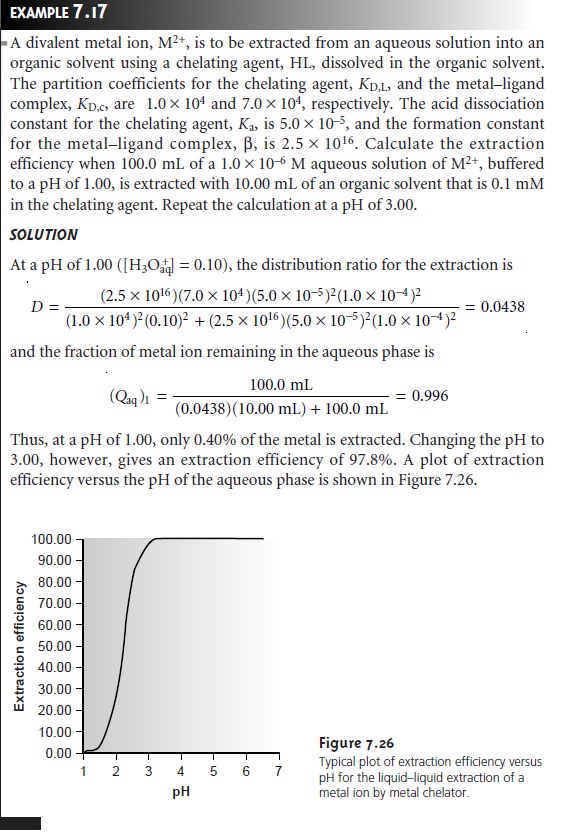 One of the advantages of using a chelating agent is the high degree of selec- tivity that it brings to the extraction of metal ions. As shown in Example 7.17 and Figure 7.26, the extraction efficiency for a divalent cation increases from approximately 0%–100% over a range of only 2 pH units. Furthermore, a chelating agent’s metal–ligand formation constant varies substantially between metal ions. As a result, significant differences arise in the pH range over which different metal ions experience an increase in extraction efficiency from 0% to 100% (Figure 7.27). 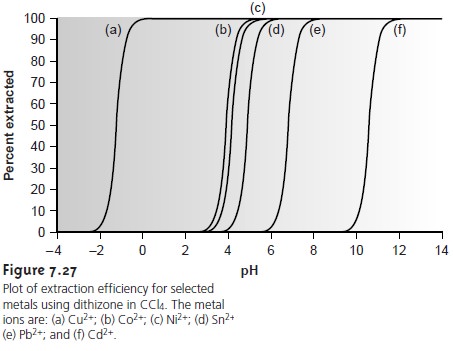 Liquid–liquid extractions using ammonium pyrrolidine dithiocarbamate (APDC) as a metal chelating agent are commonly encountered in the analysis of metal ions in aqueous samples. The sample and APDC are mixed together, and the resulting metal–ligand complexes are extracted into methyl isobutyl ketone before analysis.