The simplest physical property that can be exploited in a separation is size.

Separations Based on Size

The simplest physical property that can be exploited in a separation is size. The separation is accomplished using a porous medium through which only the analyte or inter- ferent can pass. Filtration, in which gravity, suction, or pressure is used to pass a sample through a porous filter is the most commonly encountered separation technique based on size.

Particulate interferents can be separated from dis- solved analytes by filtration, using a filter whose pore size retains the interferent. This separation technique is important in the analysis of many natural waters, for which the presence of suspended solids may interfere in the analysis. Filtration also can be used to isolate analytes present as solid particulates from dissolved ions in the sample matrix. For example, this is a necessary step in gravimetry, in which the analyte is isolated as a precipi- tate.

Another example of a separation technique based on size is dialysis, in which a semipermeable membrane is used to separate the analyte and interferent. Dialysis membranes are usually constructed from cellulose, with pore sizes of 1–5 nm. The sample is placed inside a bag or tube constructed from the membrane. The dialysis membrane and sample are then placed in a container filled with a solution whose composition differs from that of the sample. If the concentration of a particular species is not the same on the two sides of the membrane, the resulting concentra- tion gradient provides a driving force for its diffusion across the membrane. Al- though small particles may freely pass through the membrane, larger particles are unable to pass (Figure 7.11). Dialysis is frequently used to purify proteins, hormones, and enzymes. During kidney dialysis, metabolic waste products, such as urea, uric acid, and creatinine, are removed from blood by passing it over a dialysis membrane. 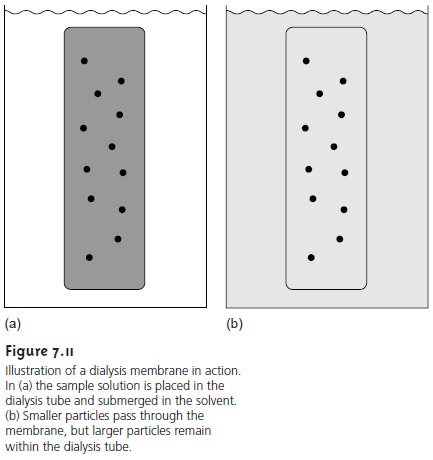 Size-exclusion chromatography, which also is called gel permeation or molecular- exclusion chromatography, is a third example of a separation technique based on size. In this technique a column is packed with small, approximately 10-μm, porous particles of cross-linked dextrin or polyacrylamide. The pore size of the particles is controlled by the degree of cross-linking, with greater cross-linking resulting in smaller pore sizes. The sample to be separated is placed into a stream of solvent that is pumped through the column at a fixed flow rate. Particles too large to enter the pores are not retained and pass through the column at the same rate as the solvent. Those particles capable of entering into the pore structure take longer to pass through the column. Smaller particles, which penetrate more deeply into the pore structure, take the longest time to pass through the column. Size-exclusion chro- matography is widely used in the analysis of polymers and in biochemistry, where it is used for the separation of proteins.