Classifying Separation Techniques: Separations Based on Mass or Density

If there is a difference in the mass or density of the analyte and interferent, then a separation using centrifugation may be possible.

Separations Based on Mass or Density

If there is a difference in the mass or density of the analyte and interferent, then a separation using centrifugation may be possible. The sample, as a suspension, is placed in a centrifuge tube and spun at a high angular velocity (high numbers of revolutions per minute, rpm). Particles experiencing a greater centrifugal force have faster sedimentation rates and are preferentially pulled toward the bottom of the centrifuge tube.

Centrifugation is of particular importance as a separation technique in biochem- istry. As shown in Table 7.5, cellular components can be separated by centrifugation.12 For example, lysosomes can be separated from other cellular components by repeated differential centrifugation, in which the sample is divided into a solid residue and a so- lution called the supernatant. After destroying the cell membranes, the solution is centrifuged at 15,000 x g (a centrifugal field strength that is 15,000 times that of the Earth’s gravitational field) for 20 min, leaving a residue of cell membranes and mitochondria. The supernatant is isolated by decanting from the residue and is centrifuged at 30,000 x g for 30 min, leaving a residue of lysosomes.

An alternative approach to differential centrifugation is equilibrium– density–gradient centrifugation. The sample is either placed in a solution with a preformed density gradient or in a solution that, when centrifuged, forms a density gradient. For example, density gradients can be established with solutions of sucrose or CsCl. During centrifugation, the sample’s com- ponents undergo sedimentation at a rate determined by their centrifugal force. Because the solution’s density increases toward the bottom of the cen- trifuge tube, the sedimentation rate for each component decreases as it moves toward the bottom of the centrifuge tube. When a component reaches a posi- tion where its density is equal to that of the solution, the centrifugal force drops to zero and sedimentation stops. Each component, therefore, is isolated as a separate band positioned where the density of the component is equal to the density of the solution. For example, a mixture of proteins, RNA, and DNA can be separated in this way since their densities are different. A densitygradient from 1.65 g/cm3 to 1.80 g/cm3 is established using CsCl. Proteins, with a density of less than 1.3 g/cm3 experience no sedimentation, whereas RNA, with a density of greater than 1.8 g/cm3 collects as a residue at the bottom of the centrifuge tube. The DNA, which has a density of approximately 1.7 g/cm3 separates as a band near the middle of the centrifuge tube (Figure 7.12). 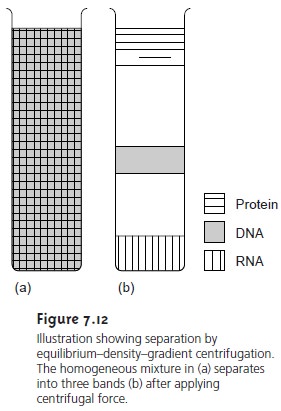