Home | | Modern Analytical Chemistry | Classifying Separation Techniques: Separations Based on a Partitioning Between Phases
Author :   David Harvey    Posted On :  11.02.2018 01:07 am

Classifying Separation Techniques: Separations Based on a Partitioning Between Phases The most important class of separation techniques is based on the selective partitioning of the analyte or interferent between two immiscible phases.

Separations Based on a Partitioning Between Phases

The most important class of separation techniques is based on the selective parti- tioning of the analyte or interferent between two immiscible phases. When a phase containing a solute, S, is brought into contact with a second phase, the solute parti- tions itself between the two phases.

is called the distribution constant, or partition coefficient. If KD is sufficiently large, then the solute will move from phase 1 to phase 2. The solute will remain in phase 1, however, if the partition coefficient is sufficiently small. If a phase containing two solutes is brought into contact with a second phase, and KD is favorable for only one of the solutes, then a separation of the solutes may be possible. The physical states of the two phases are identified when describing the separation process, with the phase containing the sample listed first. For example, when the sample is in a liquid phase and the second phase is a solid, the separation involves liquid–solid partitioning.

Liquid–liquid extractions are usually accomplished with a separatory funnel (Figure 7.15). The two liquids are placed in the separa- tory funnel and shaken to increase the surface area between the phases. When the extraction is complete, the liquids are allowed to separate, with the denser phase settling to the bottom of the separatory funnel. Liquid–liquid extractions also may be carried out in the sample container by adding the extracting solvent when the sample is collected. Pesticides in water, for example, may be preserved for longer periods by extracting into a small volume of hexane added to the sample in the field. Liquid–liquid microextractions, in which the extracting phase is a 1-μL drop suspended from a microsyringe (Figure 7.16) also have been described. 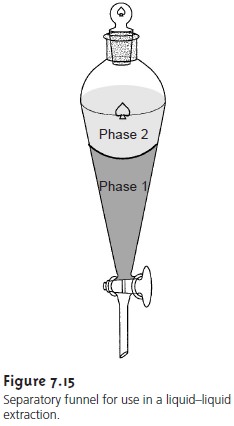 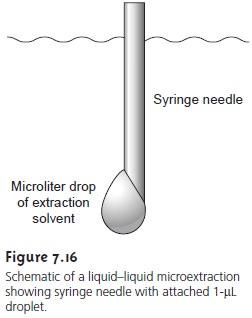 In a solid-phase extraction the sample is passed through a cartridge containing solid particulates that serve as the adsorbent material. For liq- uid samples the solid adsorbent is isolated in either a disk cartridge or a column (Figure 7.17). The choice of adsorbent is determined by the properties of the species being retained and the matrix in which it is found. Representative solid adsorbents are listed in Table 7.8. 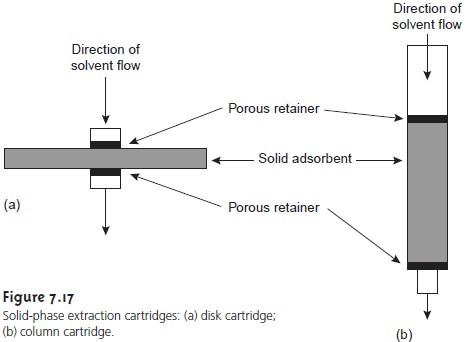 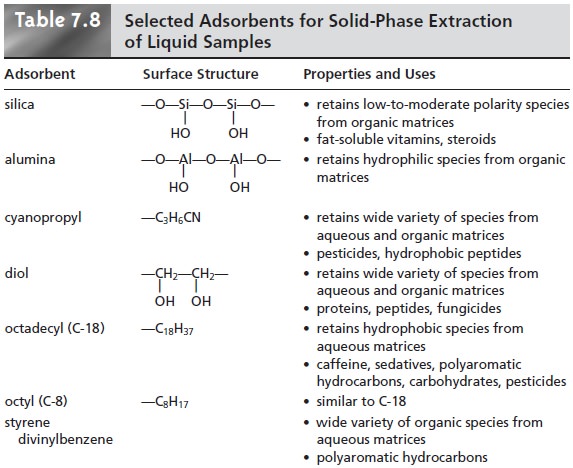 For example, sedatives, such as secobarbital and phenobarbi- tal, can be isolated from serum by a solid-phase extraction using a C-18 solid adsor- bent. Typically a 500-μL sample of serum is passed through the cartridge, with the sedatives being retained by a liquid–solid extraction. The cartridge is then washed with distilled water to remove any residual traces of the serum’s matrix. Finally, the retained sedatives are eluted from the cartridge by a solid–liquid extraction using 500 μL of acetone. For many analyses, solid–phase extractions are replacing liquid–liquid extractions due to their ease of use, faster extraction times, decreased volumes of solvent, and their superior ability to concentrate the analytes.

Solid-phase microextractions also have been developed. In one approach, a fused silica fiber is placed inside a syringe needle. The fiber, which is coated with a thin organic film, such as poly(dimethyl siloxane), is lowered into the sample by de- pressing a plunger and exposed to the sample for a predetermined time. The fiber is then withdrawn into the needle and transferred to a gas chromatograph for analysis.

In gas–solid extractions the sample is passed through a container packed with a solid adsorbent. One example of the application of gas–solid extraction is in the analysis of organic compounds for carbon and hydrogen. The sample is combusted in a flowing stream of O2, and the gaseous combustion products are passed through a series of solid-phase adsorbents that remove the CO2 and H2O.

Many continuous extractions involving solid samples are carried out with a Soxhlet extractor (Figure 7.18). The extracting solvent is placed in the lower reser- voir and heated to its boiling point. Solvent in the vapor phase moves upward through the tube on the left side of the apparatus to the condenser where it con- denses back to the liquid state. The solvent then passes through the sample, which is held in a porous cellulose filter thimble, collecting in the upper reservoir. When the volume of solvent in the upper reservoir reaches the upper bend of the return tube, the solvent and any extracted components are siphoned back to the lower reservoir. Over time, the concentration of the extracted component in the lower reservoir increases.

Soxhlet extractions have been replaced in some applications by microwave- assisted extractions. The process is the same as that described earlier for microwave digestion. The sample is placed in a sealed digestion vessel along with the liquid ex- traction phase, and a microwave oven is used to heat the extraction mixture. Using a sealed digestion vessel allows the extraction to take place at a higher temperature and pressure, thereby reducing the amount of time needed for a quantitative extrac- tion. In a Soxhlet extraction the temperature is limited by the solvent’s boiling point at atmospheric pressure. For example, when acetone is the solvent, a Soxhlet extrac- tion is limited to 56 °C. With a microwave-assisted extraction, however, a tempera- ture of over 150 °C can be obtained when using acetone as the solvent.

Two other examples of a continuous extraction deserve mention. Volatile or- ganic compounds (VOCs) can be quantitatively removed from liquid samples by a liquid–gas extraction. As shown in Figure 7.19, the VOCs are removed by passing an inert purging gas, such as He, through the sample. The He removes the VOCs, which are then carried by the He to a tube where they are collected on a solid adsor- bent. When the extraction is complete, the VOCs can then be removed from the trap for analysis by rapidly heating the tube while flushing with He. This technique is known as a purge and trap. Recoveries for analytes using a purge and trap may not be reproducible, requiring the use of internal standards for quantitative work. 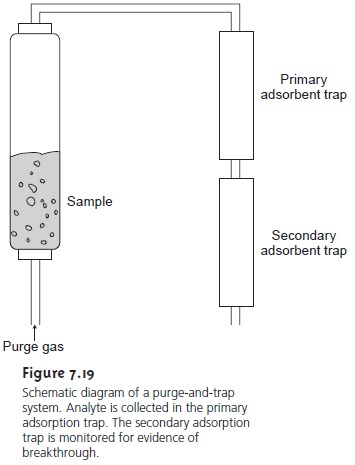 Continuous extractions also can be accomplished with supercritical fluids.19 When a substance is heated above its critical temperature and pressure, it forms a supercritical fluid whose properties are between those of a gas and a liquid. Super- critical fluids are better solvents than gases, making them a better reagent for ex- tractions. In addition, the viscosity of a supercritical fluid is significantly less than that of a liquid solvent, allowing it to pass more readily through particulate samples. One example of a supercritical extraction is the determination of total petroleum hydrocarbons (TPHs) in soils, sediments, and sludges with supercritical CO2. Approximately 3 g of sample is placed in a 10-mL stainless steel cartridge, and super- critical CO2, at a pressure of 340 atm and a temperature of 80 °C, is passed through the cartridge for 30 min at flow rate of 1–2 mL/min. The petroleum hydrocarbons are collected by passing the effluent from the cartridge through 3 mL of tetra- chloroethylene at room temperature. At this temperature the CO2 reverts to the gas phase and is released to the atmosphere.

In an extraction, the sample is initially present in one phase, and the component of interest is extracted into a second phase. Separa- tions can also be accomplished by continuously passing one sample-free phase, called the mobile phase, over a second sample-free phase that remains fixed or sta- tionary. The sample is then injected or placed into the mobile phase. As the sam- ple’s components move with the mobile phase, they partition themselves between the mobile and stationary phases. Those components having the largest partition coefficients are more likely to move into the stationary phase, taking longer to pass through the system. This is the basis of all chromatographic separation techniques. As currently practiced, modern chromatography provides a means both of separat- ing analytes and interferents and of performing a qualitative or quantitative analysis of the analyte.