Classifying Separation Techniques: Separations Based on a Change of State Since an analyte and interferent are usually in the same phase, a separation often can be effected by inducing a change in one of their physical or chemical states.

Separations Based on a Change of State

When the analyte and interferent are mis- cible liquids, a separation based on distillation may be possible if their boiling points are significantly different. The progress of a distillation is outlined in Figure 7.13, which shows a plot of temperature versus the vapor-phase and liquid-phase composition of a mixture consisting of a low-boiling analyte and a high-boiling interferent. The initial mixture is indicated by the point labeled A. When this solution is brought to its boiling point, a vapor phase with the composition indi-cated by the point labeled B is in equilibrium with the original liquid phase. This equilibrium is indicated by the horizontal tie-line between points A and B. When the vapor phase at point B condenses, a new liquid phase with the same composition as the vapor phase (point C) results. The liquid phase at point C boils at a lower temperature, with an equilib- rium established with the vapor-phase composition indicated by point D. This process of repeated vaporization and condensation gradually separates the ana- lyte and interferent. 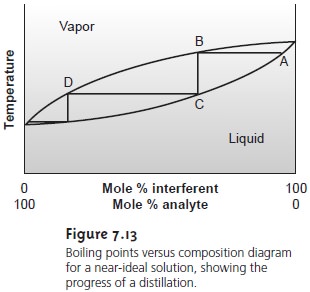 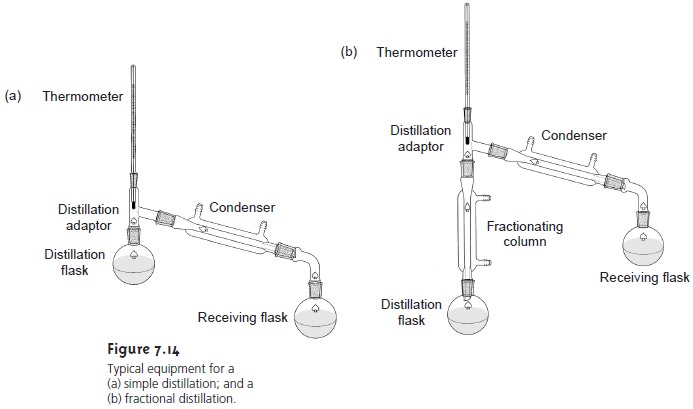 Two examples of the equipment used for distillations are shown in Figure 7.14. The simple distillation apparatus shown in Figure 7.14a does not produce a very effi- cient separation and is useful only for separating a volatile liquid from nonvolatile liquids or for separating liquids with boiling points that differ by more than 150 °C. A more efficient separation is achieved by a fractional distillation (Figure 7.14b). Packing the distillation column with a high-surface-area material, such as a steel sponge or glass beads, provides more opportunity for the repeated process of vapor- ization and condensation necessary to effect a complete separation.

When the sample is a solid, a separation of the analyte and interferent by subli- mation may be possible. The sample is heated at a temperature and pressure below its triple point where the solid vaporizes without passing through the liquid state. The vapor is then condensed to recover the purified solid. A good example of the use of sublimation is in the isolation of amino acids from fossil mollusk shells and deep-sea sediments.

Another approach for purifying solids is recrystallization. The solid is dissolved in a minimum volume of solvent, for which the analyte’s solubility is significant when the solvent is hot, and minimal when the solvent is cold. The interferents must be less soluble in the hot solvent than the analyte, or present in much smaller amounts. A portion of the solvent is heated in an Erlenmeyer flask, and small amounts of sample are added until undissolved sample is visible. Additional heated solvent is added until the sample is again dissolved or until only insoluble impuri- ties remain. The process of adding sample and solvent is repeated until the entire sample has been added to the Erlenmeyer flask. If necessary, insoluble impurities are removed by filtering the heated solution. The solution is allowed to cool slowly, promoting the growth of large, pure crystals, and then cooled in an ice bath to min- imize solubility losses. The purified sample is isolated by filtration and rinsed to re- move soluble impurities. Finally, the sample is dried to remove any remaining traces of the solvent. Further purification, if necessary, can be accomplished by ad- ditional recrystallizations.

Distillation, sublimation, and recrystallization use a change in physical state as a means of separation. Chemical reactivity also can be used in a separation by effecting a change in the chemical state of the analyte or in- terferent. For example, SiO2 can be separated from a sample by reacting with HF. The volatile SiF4 that forms is easily removed by evaporation. In other cases distilla- tion may be used to remove a nonvolatile inorganic ion after chemically converting it to a more volatile form. For example, NH4+ can be separated from a sample by mak ing the solution basic, resulting in the formation of NH3. The ammonia that is produced can then be removed by distillation. Other examples are listed in Table 7.7. 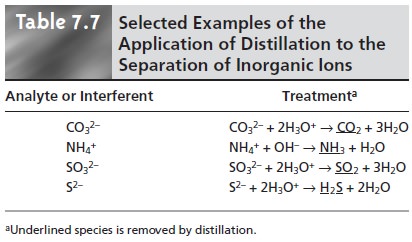 Other types of reactions can be used to chemically separate an analyte and interferent, including precipita- tion, electrodeposition, and ion exchange. Two impor- tant examples of the application of precipitation are the pH-dependent solubility of metal oxides and hydroxides, and the solubility of metal sulfides.

Separations based on the pH-dependent solubility of oxides and hydroxides are usually accomplished using strong acids, strong bases, or NH3/NH4Cl buffers. Most metal oxides and hydroxides are soluble in hot concentrated HNO3, although a few oxides, such as WO3, SiO2, and SnO2 remain insoluble even under these harsh con- ditions. In determining the amount of Cu in brass, for example, an interference from Sn is avoided by dissolving the sample with a strong acid. An insoluble residue of SnO2 remains that can then be removed by filtration.

The pH of an NH3/NH4Cl buffer (pKa = 9.24) is sufficient to ensure the precip- itation of most metals as the hydroxide. The alkaline earths and alkaline metals, however, will not precipitate at this pH. In addition, metal ions that form soluble complexes with NH3, such as Cu2+, Zn2+, Ni2+, and Co2+, also will not precipitate under these conditions.

Historically, the use of S2– as a precipitating reagent is one of the earliest exam- ples of a separation technique. In Fresenius’s 1881 text, A System of Instruction in Quantitative Chemical Analysis,15 sulfide is frequently used as a means for separat- ing metal ions from the remainder of the sample matrix. The importance of sulfide as a precipitating reagent for separations is due to two factors: most metal ions, ex- cept for the alkaline earths and alkaline metals, form insoluble sulfides; and the sol- ubilities of these metal sulfides show a substantial variation. Since the concentration of S2– is pH-dependent, control of pH was used to determine which metal ions would precipitate. For example, in Fresenius’s gravimetric procedure for the deter- mination of Ni in ore samples (see Figure 1.1 for a schematic diagram of this procedure), sulfide is used three times as a means of separating Co2+ and Ni2+ from Cu2+ and, to a lesser extent from Pb2+.