Sample Collection Solids are usually heteroge- neous, and samples must be collected carefully if they are to be representative of the target popula- tion.

Typical examples of solid samples include large particulates, such as those found in ores; smaller particulates, such as soils and sediments; tablets, pellets, and capsules used in dispensing pharmaceutical products and animal feeds; sheet materials, such as polymers and rolled metals; and tissue samples from biological specimens.

Solids are usually heteroge- neous, and samples must be collected carefully if they are to be representative of the target popula- tion. As noted earlier, solids come in a variety of forms, each of which is sampled differently.

Sediments from the bottom of streams, rivers, lakes, estuaries, and oceans are collected with a bot- tom grab sampler or with a corer. Grab samplers are equipped with a pair of “jaws” that close when they contact the sediment, scooping up sediment in the process (Figure 7.5). 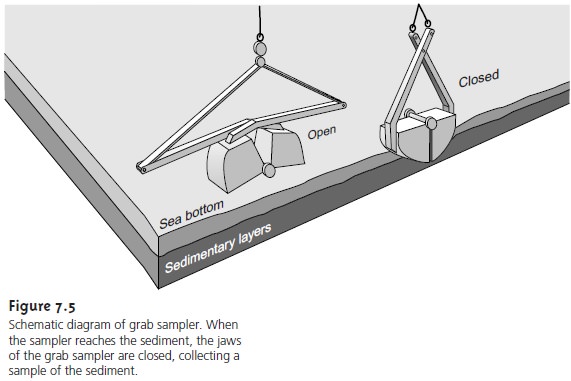 Disadvantages include the tendency to lose finer- grained sediment particles as water flows out of the sampler and the loss of spatial information, both lat erally and with depth, due to mixing of the sample.

An alternative method for sampling sediments uses a cylindrical coring device (Figure 7.6). The corer is dropped into the sediment, collecting a col- umn of sediment and the water in contact with the sediment. With the possible exception of sediment at the surface, which may experience mixing, sam-ples collected with a corer maintain their vertica profile. As a result, changes in the sediment’s com- position with depth are preserved. The main disad- vantage to a corer is that only a small surface area is sampled. For this reason sampling with a corer usu- ally requires more samples. 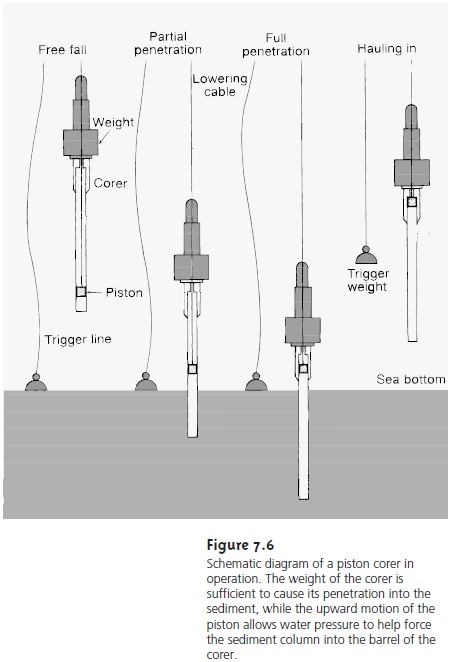 Soil samples collected at depths of up to 30 cm are easily collected with scoops or shovels, although the sampling variance is generally high. A better method for obtaining soil samples near the surface is to use a soil punch. This thin-walled steel tube retains a core sample when it is pushed into the soil and removed. Soil samples collected at depths greater than 30 cm are obtained by digging a trench and collecting lateral samples with a soil punch. Alternatively, an auger may be used to drill a hole to the desired depth and the sample col- lected with a soil punch.

The sampling of particulate material is often determined by the size of the par- ticles. Large particulate solids, such as coals and ores, can be sampled by randomly collecting samples with a shovel or by riffling. A riffle (Figure 7.7) is a trough con- taining an even number of compartments with adjacent compartments emptying on opposite sides of the riffle. Particulate material dumped into a riffle is divided into two parts. By repeatedly passing half of the separated material back through the riffle, a sample of any desired size may be collected. Smaller particulate materials, such as powders, are best collected with a sample thief, which allows material to be collected simultaneously from several locations (Figure 7.8). A typical sample thief consists of two tubes that are nestled together. Each tube has an identical set of slots aligned down their length. Before the sample thief is inserted into the material being sampled, the inner tube is rotated so that slots are closed. When the sample thief is in place, the inner tube is rotated to open the slots, allowing the powder to enter the sample thief through each slot. The inner tube is then rotated to the closed position and the sample thief withdrawn. 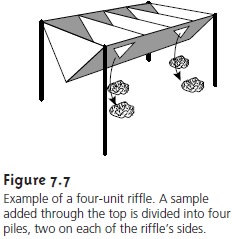 When sampling a metal, it usually is necessary to obtain material from both the surface and the interior. When the metal is in the form of a sheet, random samples can be collected with a metal punch. Samples can be obtained from a metal wire by randomly cutting off pieces of an appropriate length. Larger pieces of metal, such as bars or bricks, are best sampled by sawing through the metal at randomly selected points and collecting the “sawdust” or by drilling through the metal and collecting the shavings. A surface coating can be sampled in situ or by dissolving the coating with an appropriate solvent.

Without preservation, many solid samples are subject to changes in chemical composition due to the loss of volatile material, biodegrada- tion, and chemical reactivity (particularly redox reactions). Samples stored at re- duced temperatures are less prone to biodegradation and the loss of volatile mate- rial, but fracturing and phase separations may present problems. The loss of volatile material is minimized by ensuring that the sample completely fills its container without leaving a headspace where gases can collect. Samples collected from mate- rials that have not been exposed to O2 are particularly susceptible to oxidation reac- tions. For example, the contact of air with anaerobic sediments must be prevented.

Unlike gases and liquids, which generally require little sample preparation, solid samples usually need some processing before analysis. There are two reasons for this. First, as discussed, sampling variance is a function of the number of particles sampled, not their combined mass. For extremely heteroge- neous populations consisting of large particulates, the gross sample may be too large to analyze. For example, a boxcar containing a load of a Ni-bearing ore with an average particle size of 5 mm may require a sample weighing one ton to obtain a reasonable sampling variance. Reducing the sample’s average particle size allows the same number of particles to be sampled with a smaller, more manageable combined mass.

Second, the majority of analytical techniques, particularly those used for a quantitative analysis, require that the analyte be in solution. Solid samples, or at least the analytes in a solid sample, must be brought into solution.

A reduction in particle size is accomplished by a combina- tion of crushing and grinding the gross sample. The resulting particulates are then thoroughly mixed and divided into samples of smaller mass containing the appro- priate number of particles. The process seldom occurs in a single step. Instead, sam- ples are cycled through the process several times until a laboratory sample of de- sired mass is obtained.

Crushing and grinding uses mechanical force to break larger particles into smaller ones. A variety of tools are used depending on the particle’s size and hard- ness. Large particles are crushed using jaw crushers capable of reducing particles to diameters of a few millimeters. Ball mills, disk mills, and mortars and pestles are used to further reduce particle size.

Significant changes in composition may occur during crushing and grinding. Decreasing particle size increases available surface area. With more surface area there is a greater risk of losing volatile components, a problem made worse by the frictional heat accompanying the crushing and grinding. An increase in surface area also means that portions of the sample are freshly exposed to the atmosphere where oxidation may alter the sample’s composition. Other problems include contamina- tion from the mechanical abrasion of the materials used to crush and grind the sample, and differences in the ease with which particles are reduced in size. Softer particles are reduced in size more easily and may be lost as dust before the rest of the sample has been processed. This is a problem since the analyte’s distribution may not be uniform between particles of different size.

To ensure that all particles are reduced to a uniform size, the sample is intermit- tently passed through a sieve. Processing of those particles not passing through the sieve continues until the entire sample is of uniform size. The sample is then mixed thoroughly to ensure homogeneity, and a secondary sample obtained with a riffle or by coning and quartering. The latter approach is outlined in Figure 7.9. The gross sample is piled into a cone, flattened, divided into four quarters, and two diagonally opposed quarters are discarded. The remaining material is cycled through the process of coning and quartering until the desired amount of sample remains. 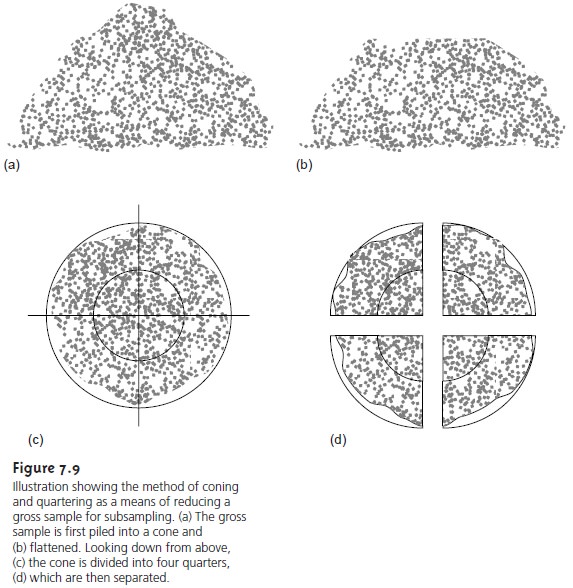 If you are fortunate, the sample with which you are working will easily dissolve in a suitable solvent, requiring no more effort than gentle swirling and heating. Distilled water is usually the solvent of choice for inorganic salts, but an organic solvent, such as methanol, chloroform, or toluene, is used for organic materials. More often, one or more of the sample’s components re- sist simple dissolution.

With samples that are difficult to dissolve, the first approach is usually to try di- gesting the sample with an acid or base. Table 7.2 lists the most commonly used acids and bases and summarizes their use. Digestion is commonly carried out in an open container, such as a beaker, using a hot plate as a source of heat. The chief ad- vantage of this approach is its low cost as it requires no special equipment. Volatile reaction products, however, are lost, leading to a determinate error if analyte is in- cluded among the volatile substances. 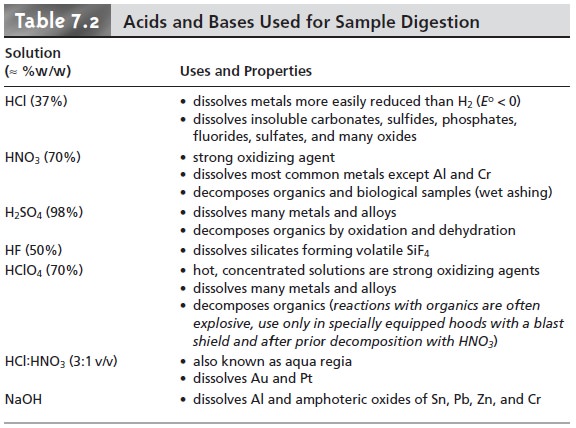 Many digestions are now carried out in closed containers using microwave ra- diation as a source of energy for heating the solution. Vessels for microwave diges- tion are manufactured using Teflon (or some other fluoropolymer) or fused silica. Both materials are thermally stable, chemically resistant, transparent to microwave radiation, and capable of withstanding elevated pressures. A typical microwave digestion vessel is shown in Figure 7.10 and consists of the vessel body and cap, a tem- perature probe, and a pressure relief valve. Vessels are placed in a microwave oven (typically 6–12 vessels can be accommodated), and microwave energy is controlled by monitoring the temperature or pressure within the vessels. A microwave diges- tion has several important advantages over an open container digestion, including higher temperatures (200–300 °C) and pressures (40–100 bar). As a result, diges- tions requiring several hours in an open container may be accomplished in less than 30 min using microwave digestion. 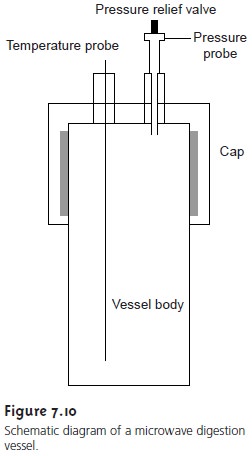 In addition, the closed container prevents the loss of volatile gases. Disadvantages include the inability to add reagents during di- gestion, limitations on the amount of sample that can be used (typically 1 g or less), and safety concerns due to the use of high pressures and corrosive reagents. Appli- cations include environmental and biological samples.

Inorganic samples that resist decomposition by digestion with acids or bases often can be brought into solution by fusing with a large excess of an al- kali metal salt, called a flux. The sample and flux are mixed together in a cru- cible and heated till the substances fuse together in a molten state. The resulting melt is allowed to cool slowly to room temperature. Typically the melt dissolves readily in distilled water or dilute acid. Several common fluxes and their uses are listed in Table 7.3. Fusion works when other methods of decomposition do not because of the higher temperatures obtained and the high concentration of the reactive flux in the molten liquid. Disadvantages include a greater risk of contamination from the large quantity of flux and the crucible and the loss of volatile materials.

Finally, organic materials may be decomposed by dry ashing. In this method the sample is placed in a suitable crucible and heated over a flame or in a furnace. Any carbon present in the sample is oxidized to CO2, and hydrogen, sulfur, and ni- trogen are removed as H2O, SO2 and N2. These gases can be trapped and weighed to determine their content in the organic material. Often the goal of dry ashing is the removal of organic material, leaving behind an inorganic residue, or ash, that can be further analyzed.