Many chemical reactions that have industrial importance such as synthesis of ammonia are reversible in nature.

The effect of change in reaction conditions such as temperature, pressure and concentration etc… on a system at equilibrium can be predicted by Le Chatelier-Braun principle.

It states that “If a system at equilibrium is disturbed, then the system shifts itself in a direction that nullifies the effect of that disturbance.”

According to Le Chatelier’s principle, the effect of increase in concentration of a substance is to shift the equilibrium in a direction that consumes the added substance.

Let us consider the reaction

If HI is added to the equilibrium mixture, the concentration HI is increased, and system proceeds in the reverse direction to nullify the effect of increase in concentration of HI

Let us explain the effect change in concentration by considering the formation of HI from H2 and I 2. At equilibrium, the concentrations of HI, H2 and I2 are 1 M, 0.2 M and 0.1 M respectively.

The equilibrium was disturbed by adding 0.1 M iodine to the reaction mixture. After sometime, the concentration of HI is found to be 1.092 M. Let us verify whether the system proceeds to re-establish the equilibrium according to Le Chatelier’s principle. 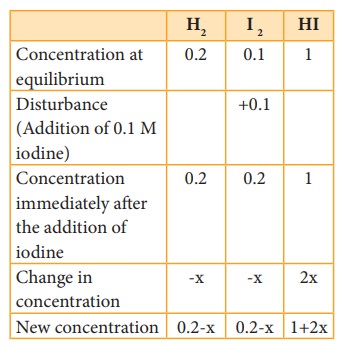 Therefore, the concentration of hydrogen and iodine at this stage,

The reaction quotient Q at this stage,

The Q value is equal to Kc value.

So, we can conclude that the system has reestablished the equilibrium at this stage and the addition of iodine results in the increase in the HI concentration. 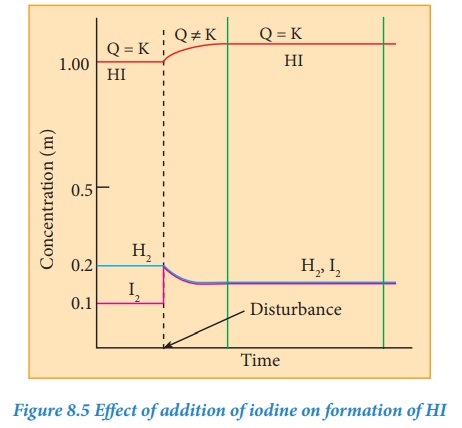 The change in pressure has significant effect only on equilibrium systems with gaseous components. When the pressure on the system is increased, the volume decreases proportionately and the system responds by shifting the equilibrium in a direction that has fewer moles of gaseous molecules.

Let us consider the synthesis of ammonia from nitrogen and hydrogen.

Let the system be allowed to attain equilibrium in a cylinder with a piston. If we press the piston down to increase the pressure, the volume decreases. The system responds to this effect by reducing the number of gas molecules. i.e. it favours the formation of ammonia. If we pull the piston upwards to reduce the pressure, the volume increases. It favours the decomposition of ammonia 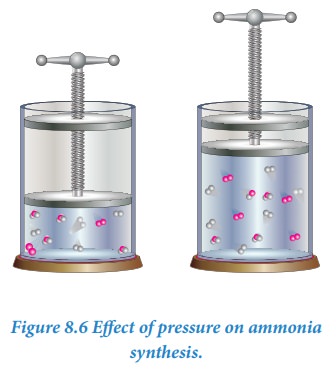 However, when the total number of the moles of the gaseous reactants and the gaseous products are equal, the change in pressure has no effect on system at equilibrium.

Let us consider the following reaction

Here, the number of moles of reactants and products are equal. So, the pressure has no effect on such equilibrium with Δng = 0.

If the temperature of a system at equilibrium is changed, the system responds by shifting the equilibrium in the direction that attempts to nullify the effect of temperature.

Let us consider the formation of ammonia.

Effect of a catalyst

Addition of a catalyst does not affect the state of the equilibrium. The catalyst increases the rate of both the forward and the reverse reactions to the same extent. Hence, it does not change the equilibrium composition of the reaction mixture.

However, it speeds up the attainment of equilibrium by providing a new pathway having a lower activation energy.

For example, in the synthesis of NH3 by the Haber's process iron is used as a catalyst.

Similarly, in the contact process of manufacturing SO3, platinum or V2O5 is used as a catalyst 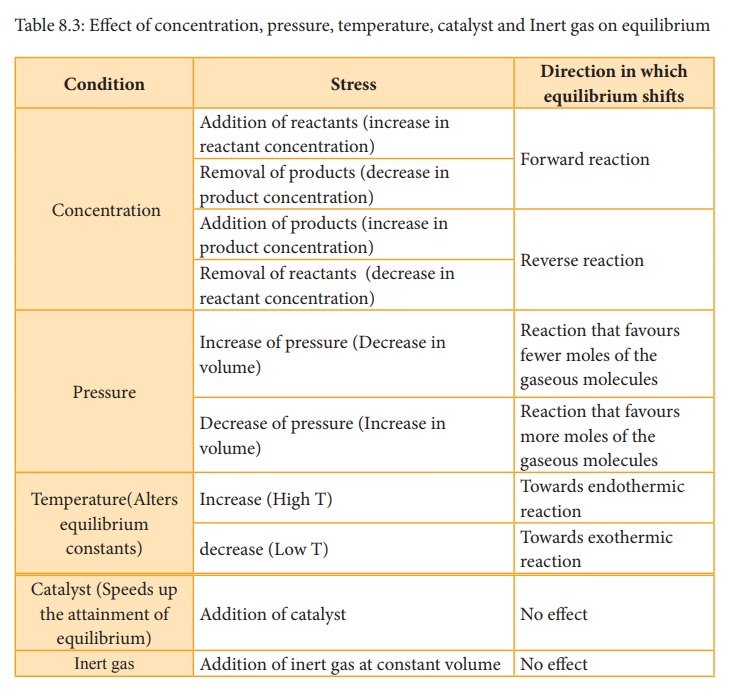