Cellular DNA, chromosomal or nonchromosomal, is the starting point of many genetic engineering experiments.

The Isolation of DNA

Cellular DNA, chromosomal or nonchromosomal, is the starting point of many genetic engineering experiments. Such DNA can be extracted and purified by the traditional techniques of heating the cell extracts in the presence of detergents and removing proteins by phenol extraction. If polysaccharides or RNA contaminate the sample, they can be re-moved by equilibrium density gradient centrifugation in cesium chloride.

Two types of vectors are commonly used: plasmids and phage. A plasmid is a DNA element similar to an episome that replicates inde-pendently of the chromosome. Usually plasmids are small, 3,000 to 25,000 base pairs, and circular. Generally, lambda phage or closely related derivatives are used for phage vectors in Escherichia coli, but for cloning in other bacteria, like Bacillus subtilis, other phage are used. In some cases a plasmid can be developed that will replicate autonomously in more than one host organism. These “shuttle” vectors are of special value in studying genes of eukaryotes; we will consider them later.

Most often, complete purification of plasmid DNA is unnecessary and useable DNA can be obtained merely by lysing the cells, partial removal of chromosomal DNA, and the removal of most protein. 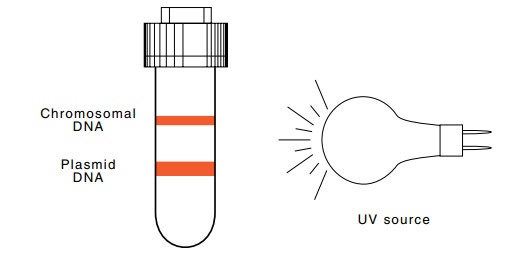 Figure 9.1 The separation of covalently closed plasmid DNA from nickedplasmid DNA and fragments of chromosomal DNA on CsCl equilibrium density gradient centrifugation in the presence of ethidium bromide. The bands of DNA fluoresce upon illumination by UV light.

Intricate DNA constructions often require highly pure DNA to avoid extraneous nucleases or inhibition of sensitive enzymes. The complete purification of plasmid DNA generally requires several steps. After the cells are opened with lysozyme which digests the cell wall and detergents are added to solubilize membranes and to inactivate some proteins, most of the chromosomal DNA is removed by centrifugation. For many purposes chromatographic methods can be used to complete the purification. When the highest purity is required, however, the plasmid is purified by equilibrium density gradient centrifugation. This is done in the presence of ethidium bromide. Any chromosomal DNA remaining with the plas-mid will have been fragmented and will be linear, whereas most of the plasmid DNA will be covalently closed circles. As we saw, intercalating ethidium bromide untwists the DNA. For a circular mole-cule this untwisting generates supercoiling whereas for a linear mole - cule the untwisting has no major effects. Therefore a linear DNA molecule can intercalate more ethidium bromide than a circular mole-cule. Since ethidium bromide is less dense than DNA, the linear DNA molecules with intercalated ethidium bromide “float” relative to the circles, and therefore the two species can easily be separated. Following the centrifugation, the two bands of DNA are observed by shining UV light on the tube (Fig. 9.1). The natural fluorescence of ethidium bromide is enhanced 50 times by intercalation into DNA, and the bands glow a bright cherry red under UV light.

Lambda phage may also be partially purified by rapid techniques that remove cell debris and most contaminants. A more complete purification can be obtained by utilizing their unique density of 1.5 g/cm3, which is halfway between the density of protein, 1.3, and the density of DNA, 1.7. The phage may be isolated by equilibrium density gradient centrifugation in which the density halfway between the top and bottom of the centrifuge tube is 1.5. They too may be easily observed in the centrifuge tube. They form a bluish band, which results from the preferential scattering of shorter wavelengths of light known as Tyndall effect. This same phenomenon is the reason the sky is blue and sunsets are red.