Cloning DNA in higher cells poses the same problems as cloning in bacteria.

Cloning DNA in higher cells poses the same problems as cloning in bacteria. The vectors must permit simple purification of sizable quan-tities of DNA, must permit selection of transformed cells, and must have space for inserted DNA. Shuttle vectors, which have been extensively used for cloning in yeast, are a neat solution to these requirements. In addition to containing the normal bacterial cloning-plasmid elements, they contain a yeast replicon and a genetic marker selectable in yeast (Fig. 9.10). As a result, large quantities of the vectors can be obtained by growth in E. coli and then transformed into yeast. The ability to shuttle between bacteria and yeast saves much time and expense in genetic engineering experiments.

Two types of yeast replication origins can be used in yeast shuttle vectors. One is a yeast chromosomal DNA replication origin, also known as an ARS element. The other is the origin from the 2 µ circles. These are plasmid-like elements with unknown function that are found in yeast. They are somewhat more stable than the ARS vectors. Nutritional markers such as uracil, histidine, leucine, and tryptophan biosynthesis have been used as selectable genes in the appropriately auxotrophic yeast.

Viruses form a basis for many vectors useful in higher plant and animal cells. For example, one of the simplest vectors for mammalian cells is the simian virus SV4O. It permits many of the same cloning operations as phage lambda.

The terminology used with mammalian cells can be confusing. “Transformation” can mean that cells have received a plasmid. It can also mean that the cells have lost their contact inhibition. In this state they continue growing past the confluent cell monolayer stage at which 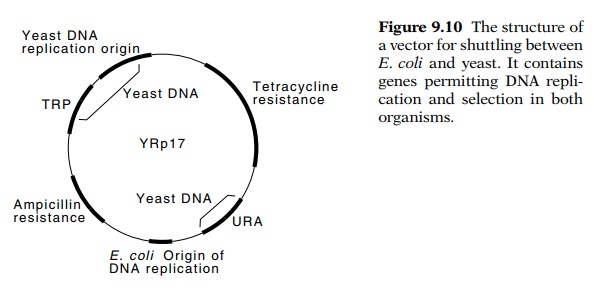 Figure 9.10 The structure ofa vector for shuttling between E. coli and yeast. It containsgenes permitting DNA repli-cation and selection in both organisms. 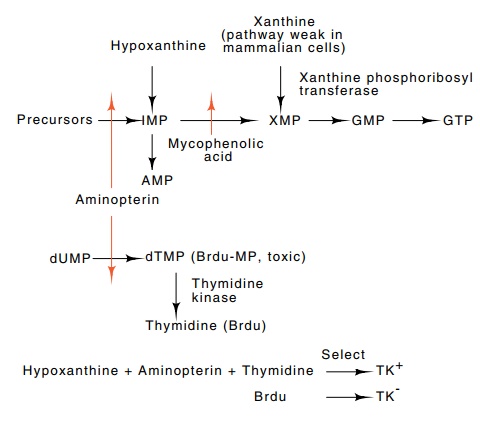 normal mammalian cells cease growth. Transformation to the uninhibi-ted growing state can result from infection by a tumor-causing virus like SV4O or it can be a result of mutation of the genome. Although loss of contact inhibition could be useful in identifying cells that have incorpo-rated the SV4O DNA or SV4O hybrids, this property is of limited use. Other selectable genetic markers suitable for mammalian cells are required.

Although the thymidine kinase gene has been useful in selecting cells that have taken up foreign DNA, a selectable gene that does not require the prior isolation of a thymidine kinase negative mutant in each cell line would also be valuable. The E. coli enzyme xanthine-guanine

phosphoribosyl transferase gene appears to meet these requirements. The protein product of the gene functions in mammalian cells and permits selective growth of nonmutant cells that contain the enzyme (Fig. 9.11). The required growth medium contains xanthine, hypoxan-thine, aminopterin, and mycophenolic acid. Other dominant genes useful for the selection of transformed cells are mutant dihydrofolate reductase that is resistant to methotrexate, a potent inhibitor of the wild-type enzyme, and kanamycin-neomycin phosphotransferase. The latter is an enzyme derived from a bacterial transposon and confers resistance to bacteria, yeast, plant, and mammalian cells to a compound called G418 . Of course, for proper expression in the higher cells the gene must be connected to an appropriate transcription unit and must contain the required translation initiation and polyadenylation signals.