ost plasmids are small circles that contain the elements necessary for DNA replication, one or two drug-resistance genes, and a region of DNA into which foreign DNA may be inserted without damage to essential plasmid functions.

ost plasmids are small circles that contain the elements necessary for DNA replication, one or two drug-resistance genes, and a region of DNA into which foreign DNA may be inserted without damage to essential plasmid functions. One widely used plasmid, pBR322, carries genes coding for resistance to tetracycline and β-lactamase (Fig. 9.8). The latter confers resistance to penicillin and related analogs by cleaving the drugs in the lactam ring, which renders them biologically inactive. Genes conferring resistance to chloramphenicol, tetracycline, and kanamycin are other selectable drug-resistance markers commonly carried on plasmids. 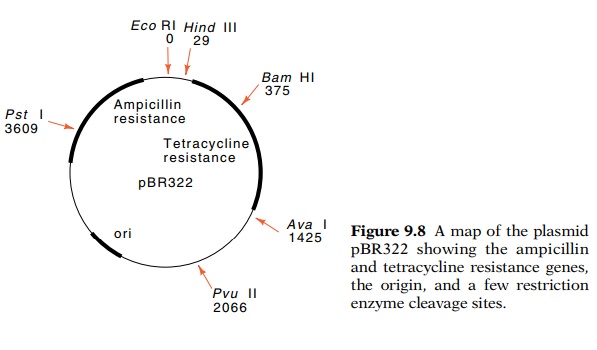 A useful element to have on plasmids is a DNA replication origin from a single-stranded phage. When such an origin is activated by phage infection, the cell synthesizes sizeable quantities of just one strand of the plasmid. This facilitates DNA sequencing. In a typical cloning experiment, a plasmid is cut in a nonessential region with a restriction enzyme, say EcoRI, foreign EcoRI-cut DNA is added, and the single-stranded ends are hybridized together and ligated. Only a small fraction of the plasmids subjected to this treatment will contain inserted DNA. Most will have recircularized without insertion of foreign DNA. How can transformants whose plasmids contain inserted DNA be distin-guished from plasmids without inserted DNA? Of course, in some conditions a genetic selection can be used to enable only transformants with the desired fragment of inserted DNA to grow. More often this is not possible and it becomes necessary to identify candidates that con-tain inserted DNA.

One method for identifying candidates relies on insertional inactiva-tion of a drug-resistance gene. For example, within the ampicillin-resis-tance gene in pBR322 exists the only plasmid cleavage site of the restriction enzyme PstI. Fortunately PstI cleavage generates sticky ends and DNA may readily be ligated into this site, whereupon it inactivates the ampicillin-resistance gene. The tetracycline-resistance gene on the plasmid remains intact and can be used for selection of the cells transformed with the recombinant plasmid. The resulting colonies can be tested by spotting onto a pair of plates, one containing ampicillin, and one not containing ampicillin. Only the ampicillin-sensitive, tetra-cycline-resistant transformants contain foreign DNA in the plasmid. The ampicillin-resistant transformants derive from plasmid molecules that recircularized without insertion of foreign DNA.

Another way to screen for the insertion of foreign DNA utilizes the β-galactosidase gene. Insertion of foreign DNA within the gene inacti-vates the enzyme, which can be detected by plating transformed cells on medium that selects for the presence of the plasmid and also contains substrates of β-galactosidase that produce colored dyes when hydro-lyzed. A plasmid would be unwieldy if it contained the complete 3,000 base-pair βgalactosidase gene. Therefore, only a particular N-terminal portion of the gene is put on the plasmid. The remainder of the enzyme is encoded by a segment inserted into the chromosome of the host cells. The two portions of the gene synthesize domains that bind to one another and yield active enzyme. This unusual phenomenon is called α-complementation. Cloning vectors are designed for the insertion offoreign DNA into the short, N-terminal part of β-galactosidase.

A simple technique can greatly reduce recircularization of vector molecules that lack inserted foreign DNA. If the vector DNA is treated with a phosphatase enzyme after cutting with the restriction enzyme, then recircularization is impossible because the 5’-PO4 ends required by DNA ligase are absent. Foreign DNA, however, will carry 5’-PO4 ends, and therefore two of the four breaks flanking a fragment of foreign DNA can be ligated. This DNA is active in transformation because cells repair the nick remaining at each end of the inserted fragment.

Plasmids or phage cloning vectors can contain a short stretch of DNA containing unique cleavage sites for a number of restriction enzymes. These polylinker regions permit cleavage by two enzymes so that the resulting sticky ends are not self-complementary. The vector cannot close by itself and be religated; only when a DNA fragment containing the necessary ends hybridizes to the ends of the plasmid can the structure be ligated into a closed circle, (Fig. 9.9).

Efficient genetic engineering necessitates that plasmid DNA be ob-tainable in high quantities. Some plasmids maintain only three or four copies per cell, whereas other plasmids have cellular copy numbers of 25 to 50. Many of the high-copy-number plasmids can be further amplified because the plasmid continues to replicate after protein synthesis and cellular DNA synthesis have ceased due to high cell densities or the presence of protein synthesis inhibitors. After amplifi-cation, a cell containing such a relaxed-control plasmid may contain as many as 3,000 plasmid copies.

Figure 9.9 Cleavage in a polylinker region by two different restriction enzymescan create sticky ends that will not hybridize to themselves, but can only hybridize upon the entry of a foreign DNA molecule containing the appropriate sticky ends.

by genetic engineering. The starting materials were R plasmids, which are plasmids or autonomously replicating DNA elements that carry one or more drug-resistance genes. The R plasmids are the cause of serious medical problems, for various bacteria can acquire R plasmids and thereby become resistant to the normal drugs used for treatment of infections (Table 9.2). The conversion of an R plasmid into a useful vector requires elimination of extraneous DNA and removal of multiple restriction enzyme cleavage sites. In order that foreign DNA can be cloned into the plasmid, the plasmid should possess only one cleavage site for at least one restriction enzyme, and this should be in a nones-sential region.

In the construction of cloning vectors, R plasmids were digested with various restriction enzymes. The resulting mixture of DNA fragments was hybridized together via the self-complementary ends and then ligated to produce many combinations of scrambled fragments. This DNA was transformed into cells. Only new plasmids containing at least the DNA segments necessary for replication and drug resistance sur-vived and yielded colonies. The desirable plasmids containing only single cleavage sites for some restriction enzymes could be identified by amplification and purification of the DNA followed by test digestions with restriction enzymes and electrophoresis to characterize the diges-tion products. The plasmid pBR322 possesses single restriction enzyme cleavage sites for more than twenty enzymes. Some of the more com-monly used are BamHI, EcoRI, HindIII, PstI, PvuII, and SalI.