Two techniques were developed for DNA sequencing: chemical and enzymatic. Initially more DNA was sequenced with the chemical method, but improvements in the enzymatic method now make it the method of choice for almost all sequencing problems.

Two techniques were developed for DNA sequencing: chemical and enzymatic. Initially more DNA was sequenced with the chemical method, but improvements in the enzymatic method now make it the method of choice for almost all sequencing problems. The application of the chemical methods, however, are highly useful for biochemical studies of protein-DNA interactions, and therefore also find significant use. Both the chemical and the enzymatic sequencing methods utilize electrophoresis at high temperatures in the presence of urea so as to denature the DNA. Under these conditions the single-stranded mole-cules migrate at rates almost independent of their sequence and depend-ent only on their length. In such gels two single-stranded DNA fragments differing in length by a single base can be resolved from one another if their lengths are less than 300 to 500 bases.

The basic principle of DNA sequencing by the chemical or enzymatic method is to generate a set of radioactive DNA fragments covering a region. The sizes of these fragments indicate the nucleotide sequence of the region. How is this possible? Consider a large number of single-stranded molecules (Fig. 9.16). Suppose the 5’ ends of all the molecules are at the same nucleotide. Suppose also that the 3’ ends of some of the molecules in the population are at the first A residue after the 5’ end, some end at the second A residue and so on. That is, the population of molecules consists of some ending at each of the A’s. If the first few A residues were located four, five, and nine nucleotides from the original 5’ end, then fragments would be four, five, and nine nucleotides long. The sizes of these fragments could be determined by electrophoresis. 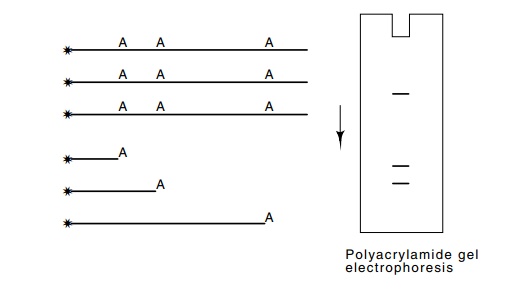 Figure 9.16 DNA sequencing. Modification at a average of one A per moleculein the population followed by cleavage at the modification sites generates a population of molecules ending at the former positions of A’s. Their electropho-resis generates the ladder pattern indicated.

Practical considerations slightly complicate the above procedure. First, the amounts of DNA that must be identified are too small to be detected by staining with ethidium bromide and observing the fluores - cent DNA bands. Second, the chemical method generates extraneous fragments in addition to those originating from the one end under consideration. These other fragments could interfere with the identifi-cation of the desired fragments. Both problems are solved by radioac-tively labeling the DNA at its 5’ end. Autoradiography of the gels then provides adequate sensitivity, and only the fragments that are radioac-tive and generate bands on the autoradiographs are precisely those that include the labeled end.

Obtaining a DNA fragment labeled only at one end is not difficult. Each strand in a double-stranded segment can be labeled on its 5’ end with the enzyme T4 phage polynucleotide kinase. Then the two strands can be separated by denaturation of the DNA and electrophoresis under partially denaturing conditions. Frequently the two strands migrate at different rates and can be separated. If so, either can be used in chemical sequencing. A second way to obtain the DNA fragment with a radioac-tive label on only one end also begins with end-labeled double-stranded duplex (Fig. 9.17). This duplex is next cleaved with a restriction enzyme and if the two fragments are unequal in size, they can be separated by electrophoresis. Either of the fragments is suitable for DNA sequencing because only one of the strands in each fragment is then radioactive, and it is labeled on only one end.

To sequence a stretch of DNA, four populations of radiolabeled DNA are made, one partially cleaved at each of the four bases. These four populations are then subjected to electrophoresis in four adjacent lanes on the denaturing gels. The resulting four ladder patterns permit direct reading of the sequence of the bases. 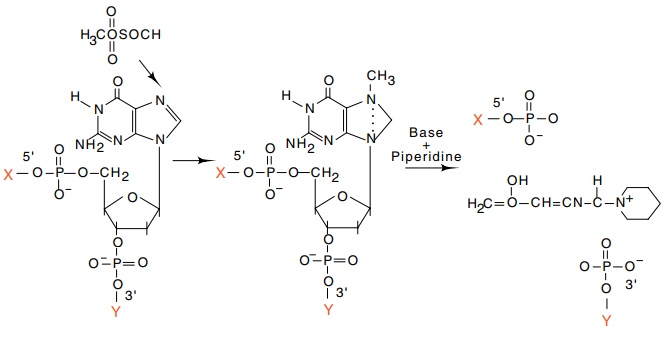 Figure 9.18 Basis of the G-specific reaction in Maxam-Gilbert sequencing. Thefinal result is strand scission at the former position of a guanosine.

In the chemical sequencing method the cleavages at the four bases are made by subjecting the labeled DNA to conditions that generate base-specific cleavage of the phosphodiester bonds. An average of about one cleavage per several hundred bases is optimal for most sequencing. Maxam and Gilbert discovered that to generate the requisite base specificity, the procedure needed to be broken into two parts. The first part introduces a highly base-specific chemical modification under controlled and mild conditions. Then harsh conditions are used to generate the actual cleavages at all the modified positions.

Dimethylsulfate provides a highly specific methylation of guanines (Fig. 9.18). The introduction of the methyl group permits subsequent depurination followed by cleavage of the sugar-phosphate backbone with piperidine. Slightly altered conditions yield methylation by di-methyl sulfate of guanines, and to a lesser extent, methylation of adenines. Hydrazine is used for pyrimidine-specific reactions. Both thymine and cytosine react with hydrazine unless high concentrations of salt are present. Then only cytosine reacts. These reactions yield bands for G’s, G’s + A’s, C’s + T’s, and T’s. These are sufficient for sequence determination.

Consider, for example, that the DNA sequence near the 5’ end of the fragment was 5’-GTCAAG-3’ and the fragment was labeled on its 5’ end. Then electrophoresis of the four reaction products yields a ladder pattern from which the sequence may be read by proceeding upward on the gel from lane to lane (Fig. 9.19). Sequences of up to about 200 bases may be read from a single set of reactions.