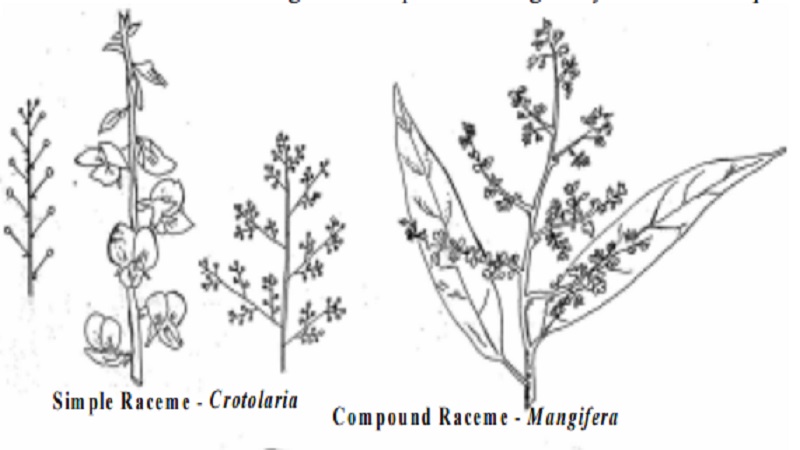 When several flowers arise in a cluster on a common axis, the structure is referred to as an inflorescence. The common axis is the inflorescence axis which is also called rachis or peduncle. Several single flowers are attached to the inflorescence axis. In case of plants possessing underground rhizomes, the rachis or peduncle arises directly from the rhizome. Such a rachis is referred to as scape. In the case of lotus, the scape gives rise to a solitary flower. In plants like onion, the scape gives rise to an inflorescence.

Based on the location, the inflorescence may be classified into 3 types.

In plants like Callistemon the inflorescence is found in between the stem. This is called intercalary inflorescence.

Generally, based on the arrangement, structure and organisation of flowers on the axis, inflorescence are classified into various types. There are four major types.

Here the inflorescence axis is very much elongated and bears pedicellate or sessile flowers. This may include several types.

This is a very simple type of inflorescence. The axis shows unlimited growth. Numerous pedicellate flowers are arranged from base to apex in acropetal succession. Each flower arises in the axil of a bract eg. Crotolaria retusa, Cleome viscosa.

In this type, the inflorescence axis is branched. Each branch shows flowers arranged as in a simple raceme i.e. in acropetal sucession. eg. Mangifera. 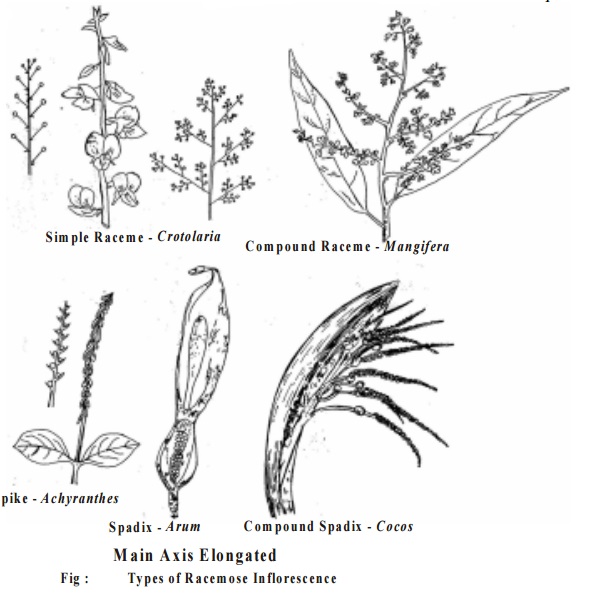 This inflorescence shows an axis of unlimited growth as in raceme but the flowers are sessile and are arranged in acropetal order eg.Achyranthes and Piper longum.

The inflorescence axis is branched and each branch is referred to as spikelet. Each spikelet bears a few flowers only. The base of the inflorescence shows a pair of bracts called glumes. Each flower has a bract called lemma and a bracteole called palea eg. Oryza(Paddy).

The swollen and fleshy inflorescence axis is branched and bears sessile flowers. There is a thick and large boat-shaped bract calledspathe covering the inflorescence eg. Cocos. 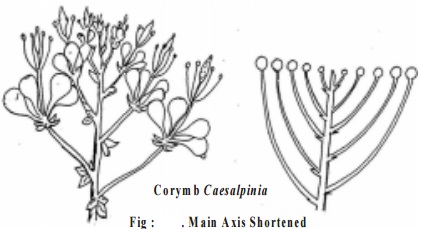 Here the main axis shows reduced growth and is shortened. Corymb belongs to this type.

The inflorescence axis in this type is not elongated as in raceme. The pedicels of the flowers are of unequal length. The older flowers have long pedicels and the younger flowers show short pedicels. So all

There are two types under this-umbel and compound umbel.

The main axis may be simple or branched. But the vertical growth of the axis is suddenly stopped and a whorl of bracts arise at the tip of the inflorescence. This is called involucre of bracts from the axils of which arise flowers having pedicels of equal length. The flowers are in acropetal order and present at the same level. eg. Allium cepa (Onion). 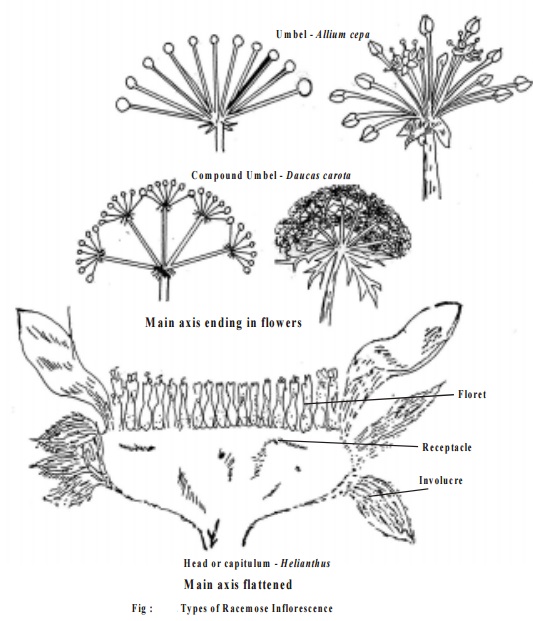 The main axis is flattened and assumes various shapes. On the flattened axis flowers are arranged.

There are two types under this - head or capitulum and compound head.

The main axis of the inflorescence is flattened and functions as the thalamus. This bears numerous florets in acropetal order. The inflorescence is surrounded by an involucre of bracts which are green in colour and protect the young flowers and fruits.

This type shows florets of a single kind only which may be ray or disc florets eg. Vernonia shows only disc florets and Launaeashows ray florets only.

The florets present here belong to both ray and disc type. The disc florets are present in the centre of the thalamus while the ray florets radiate outwards from the margins of the thalamus. eg. Helianthus, Tridax.

Inflorescence axis shows limited growth. The tip of the inflorescence stops growing after producing a flower. The lateral pair of bracts at the base of the flower give rise to lateral branches each of which ends in a flower. Similarly the lateral pair of bracts of each of these branches may also form branches. In this way flowers are formed in basipetal order i.e. from apex to base. The older flowers is at the tip and younger flower is at the base and the order of opening of flowers is centrifugal i.e. from cnetre to periphery. The flowers are few in number.

Cymose inflorescence is of various types. 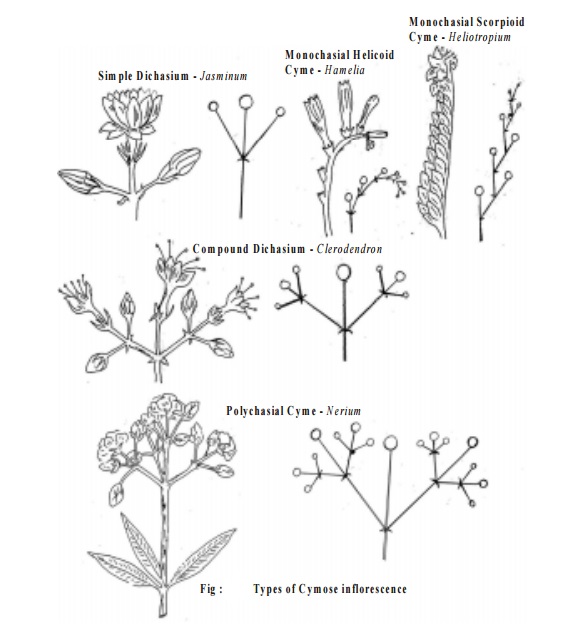 The tip of the inflorescence ends in a flower. From the lateral bracts of this flower a pair of branches arise, each ending in a flower. Each of the branches bears a pair of bracts and these also give rise to a pair of lateral branches each. Thus symmetrical bunches of three flowers each are formed where the central flower is the oldest. eg. Clerodendron.

The inflorescence axis terminates in a flower. Of the two lateral bracts only one bears flowers. Such a cyme is called a monochasial cyme. This is of two types - Helicoid cyme and Scorpioid cyme.

The main axis terminates in a flower. The lateral branches arising from the axile of bracts are on one side only giving rise to a helical appearance. eg. Hamelia patens.

The main axis stops growing after producing a flower.The lateral branches arising from the axil of bracts are produced alternately to the left and to the right in a zig-zag manner eg. Heliotropium.

The main axis terminates in a flower. The lateral branches formed from the bract continue to branch repeatedly eg. Nerium.

In this type of inflorescence, the axis starts as a racemose inflorescence and shows branching in a cymose fashion. There are different types under this.

The main axis of the inflorescence shows a number of simple dichasial cymes arranged in a racemose manner eg. Ocimum.

A pair of dichasial cymes arise from the axils of opposite flowers. Later these grow as monochasial scorpioid cymes around the stem eg. Leucas.

In Musa, several cymose clusters are arranged on the swollen inflorescence axis from base to apex. Each cymose cluster is surrounded by a large bract called spathe.

This is found in the genus Euphorbia. The inflorescence is reduced to look like a single flower. The bracts are united to form a cup - like structure enclosing

Here the receptacle is fleshy and appears like a circular disc like structure. The centre of the disc contains female flowers and around these are present the male flowers eg. Dorstenia.