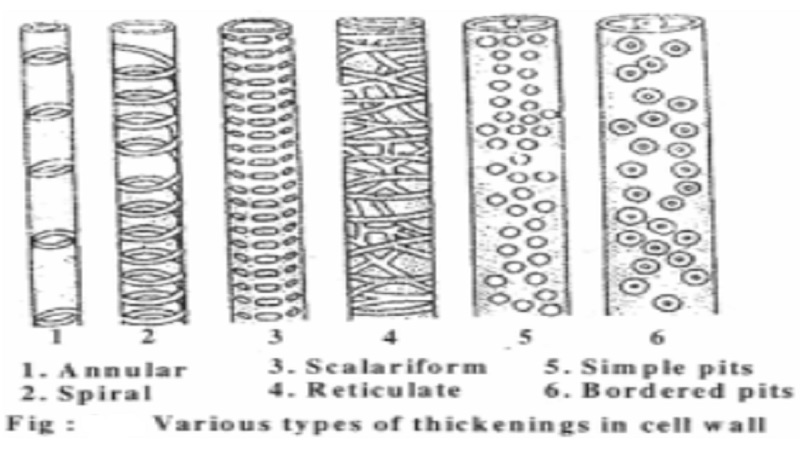 The chemical composition of cell wall varies in different kingdoms. In bacteria the cell wall is composed of peptidoglycan, in Fungi it is made up of chitin. The plant cell wall is made up of cellulose. Besides cellulose certain other chemicals such as hemicellulose, pectin, lignin, cutin, suberin, silica may also be seen deposited on the wall.

It is a thin amorphous cement like layer between two adjacent cells. Middle lamella is the first layer, which is deposited at the time of cytokinesis. It is optically inactive (isotropic). It is made up of calcium and magnesium pectates. In addition to these substances proteins are also present.

It is the first formed wall of the cell which is produced inner to the middle lamella. It is thin, elastic and extensible in growing cells. It is optically active (anisotropic). It grows by addition of more wall material within the existing one. Such a growth is termed asintussusception. Some cells like the parenchymatous cells and meristematic cells have only the primary wall. The primary wall consists of a loose network of cellulose microfibrils embedded in a gel like matrix or ground substances. In most of the plants the micro fibrils are made up of cellulose. The micro fibrils are oriented variously according to shape and thickness of the wall. The matrix of the primary wall in which the micro fibrils are embedded is mainly composed of water, hemicellulose, pectin and glycoprotein. Pectin is the filling material of the matrix. Hemicellulose binds the microfibrils with the matrix and the glycoproteins control the orientation of the microfibrils.

A thick secondary wall is laid inner to the primary wall after the cell has reached maturity. It is laid down is succession of at least three layers often named S1, S2 and S3. It grows in thickness by accretion (apposition) i.e deposition of materials over the existing structures. The central layer (S2)is usually the thickest layer. In some cells however, the number of layers may be more than three. The formation of secondary wall is not uniform in all the cells. This results in the differentiation of various types of cells, such as parenchyma, collenchyma, fibres and tracheids.

The micro fibrils of secondary wall are compactly arranged with different orientation in different layers embedded in a matrix of pectin and hemicellulose. substances like lignin, suberin, minerals, waxes, tannins, resins, gums, inorganic salts such as calcium carbonate, calcium oxalate, silica etc may be deposited in the secondary wall. The secondary wall is very strongly anisotropic and layering can be observed in it.

Fine structure of the cell wall particularly that of the secondary wall, has been intensively studied. This study was stimulated because of its importance to the fibre, paper and other industries. Cell wall is built of a system of microscopic threads the micro fibrils, which are grouped together in larger bundles. the layering seen in the secondary wall is often the result of the different density of the micro fibrils. The secondary wall consists of two continuous interpenetrating systems one of which is the cellulose micro fibrils and the other, the continuous system of micro capillary spaces. These spaces may the filled with lignin, cutin, suberin, hemicellulose and other organic substances and sometimes even some mineral crystals.