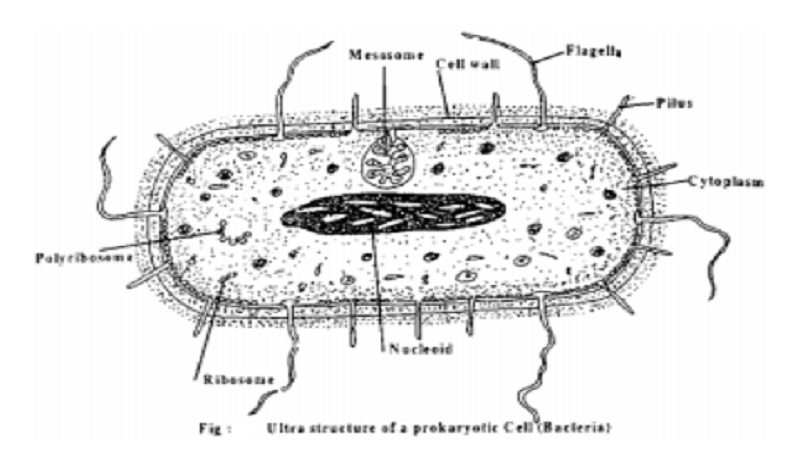 In general, Prokaryotes consist of a single closed compartment containing the cytosol and bounded by the plasma membrane. Although bacterial cells do not have a well defined nucleus, the genetic material, DNA, is condensed into the central region of the cell. In all prokaryotic cells, most of or all the genetic information resides in a single circlular DNA molecule, in the central region of the cell.

Ultra structure of a prokaryotic cell

The bacterium is surrounded by two definite membranes separated by the periplasmic space. The outer layer is rigid, serves for mechanical protection and is designated as the cell wall. The chemical composition of the cell wall is rather complex; it contains peptidoglycan, polysaccharides, lipid and protein molecules. One of the most abundant polypetides, porin, forms channels that allow for the diffusion of solutes. The plasma membrane is a lipoprotein structure serving as a molecular barrier with the surrounding medium. the plasma membrane controls the entry and exit of small molecules and ions. The enzymes involved in the oxidation of matabolites (i.e. the respiratory chain) as well as the photosystems used in photosynthesis, are present in the plasma membrane of prokaryotes.

The bacterial chromosome is a single circular molecule of naked DNA tightly coiled within the nucleoid which appears in the electron microscope as a lighter region of the protoplasm. It is amazing to note that the DNA of E.coli which measures about 1 mm long when uncoiled,contains all the genetic information of the organism. In this case, there is sufficient information to code for 2000 to 3000 different protiens.

The single chromosome or the DNA molecule is circular and at one point it is attached to the plasma membrane and it is believed that this attachment may help in the separation of two chromosomes after DNA replication.

In addition to a chromosome, certain bacteria contain a small, extrachromosomal circular DNA called plasmid. The plasmid is responsible for the antibiotic resistance in some bacteria. These plasmids are very much used in genetic engineering where the plasmids are separated and reincorporated, genes (specific pieces of DNA) can be inserted into plasmids, which are then transplanted into bacteria using the techniques of genetic engineering.

Surrounding the DNA in the darker region of the protoplasm are 20,000 to 30,000 particles called ribosomes. These are composed of RNA and proteins and are the sites of protein synthesis. Ribosomes exist in groups called polyribosomes or polysomes. Each ribosome consists of a large and a small sub unit. the remainder of the cell is filled with H2O, various RNAs, protein molecules (including enzymes) and various smaller molecules.

Certain motile bacteria have numerous, thin hair like processes of variable length called flagella. Flagella are used for locomotion. In contrast with the flagella of eukaryotic cells which contain 9+2 micortubles each flagellum in bacteria is made of a single fibril.

It was Fox et al who divided the living organisms into two kingdoms Prokaryota and Eukaryota. Prokaryotes are in turn classified into two major sub groups 1) the Archae bacteria and 2) Eubacteria. Cyanobacteria are included in the group Eubacteria. the Cyanobacterial prokaryotes, commonly called bluegreen algae, are photosynthetic. In cyanobacterial cells, the photosynthetic, respiratory and genetic apparatuses are present but not delimited from each other by any bounding membrane of their own. No sharp boundaries divide the cell into special regions. But, there are several cell components with characteristic fine structure. These are distributed throughout the cell in patterns varying from species to species and also in different developmental stages in the same species.

These cyanobacterial cells have an elaborate photosynthetic membrane system, composed of simple thylakoids and a central nucleoplasmic area which is usually fibrillar or granular or both. The cell also includes various kinds of granular inclusions, a rigid, several layered cell wall and a fibrous sheath over the cell wall.The characteristic collective properties of Cyanobacteria include oxygenic photosynthesis, chromatic adaptation, nitrogen fixation and a capacity for cellular differentiation by the formation of heterocysts, akinetes and hormogonia.