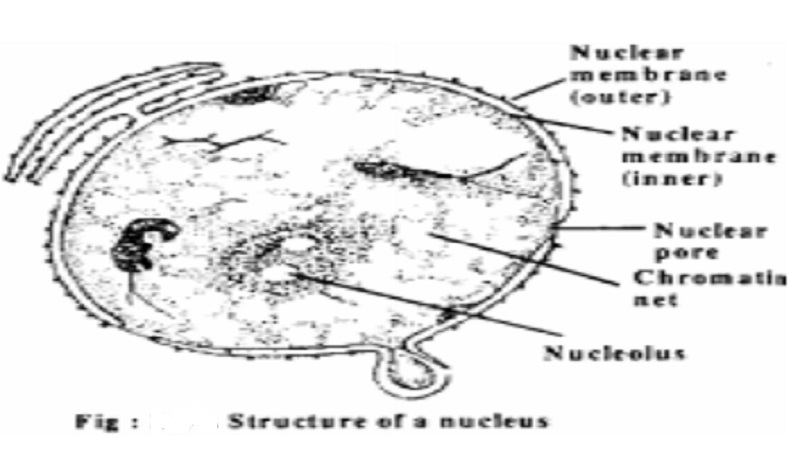 Nuclus is the largest organelle in eukaryotic cells. It is surrounded by two membranes. Each one is a phospholipid bilayer containing many different types of proteins.

The two nuclear membranes appear to fuse at the nuclear pores. These ring like pores are constructed of a specific set of membrane proteins and these act like channels that regulate the movement of substances between thenucleus and the cytosol.

In a growing of differentiating cell, the nucleus is metabolically active, producing DNA and RNA. The RNA is exported through nuclear pores to the cytoplasm for use in protein synthesis. In 'resting' cells, the nucleus is inactive or dormant and minimal synthesis of DNA and RNA takes place.

The non nucleolar regions of the nucleus is called the nucleoplasm. It has very high DNA concentration. Fibrous proteins called lamins form a two dimensional network along the inner surface of the inner membrane giving it shape and apparently binding DNA to it. During the early stages of cell division breakdown of this network occurs.

It controls all the metabolic activities of the cell by controlling the synthesis of enzymes required.

Nucleus controls the inheritance of characters from parents to offspring.