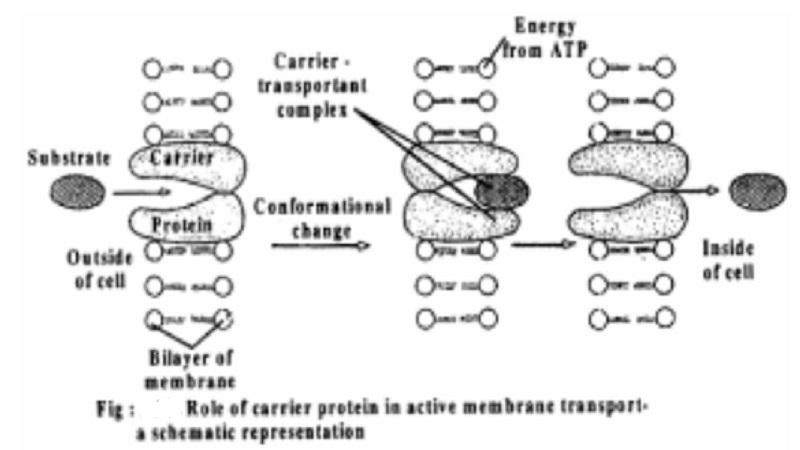 Based on the permeability a membrane is said to be:

Permeable: If a substance passes readily through the membrane

Impermeable: If a substance does not pass through the membrane

All the biological membranes are selectively permeable. Its permeability properties ensure that essential molecules such as glucose, amino acids and lipids readily enter the cell, metabolic intermediates remain in the cell and waste compounds leave the cell. In short it allows the cell to maintain a constant internal environment.

Substances are transported across the membrane either by:

Passive Transport of materials across the membrane requires no energy by the cell and it is unaided by the transport proteins. The physical processes through which substances get into the cell are 1.Diffusion 2.Osmosis

The rate of diffusion is directly proportional to

the concentration of the substance

temperature of the medium

area of the diffusion pathway

The diffusion is inversely proportional to

the size of the substance molecules

the molecular weight of the substance molecule

the distance over which the molecules have to diffuse

Gases and small hydrophobic molecules diffuse directly across the phospholipid bilayer at a rate proportional to their ability to dissolve in a liquid hydro carbon. Transport of molecules takes place along the concentration gradient and no metabolic energy is expended in this process. This can be described as 'down hill transport' . Diffusion through the bio membrane takes place in two ways.

Diffusion of fat-soluble substances through plasma membrane simply by dissolving in the lipid bilayer.

Diffusion of water soluble substances and ions: This takes place through pores in the membranes.

Diffusion of charged particles water soluble substances and ions such as K+ Cl- and HCO3- diffuse through the pores in the membranes. An ion diffuses from the side richer in like charges to the side with an excess of opposite charges. The difference of electrical charges between the two sides of a membrance is called electro chemical gradient.

The integral proteins of the membrane act as protein channels extending through the membrane. The movement of gas molecules occurs down its pressure gradient.

It helps in absorption of water from the soil by root hairs.

Osmosis helps in cell to cell movement of water.

Osmosis helps to develop the turgor pressure which helps in opening and closing of stomata. (For more about Osmosis see unit 5.4)

The plasma membrane of most cells (animal or plant) contains several uniporters that enable amino acids, nucleosides, sugars and other small molecules to enter and leave cells down their concentration gradients. Similar to enzymes, uniporters accelerate a reaction that is thermodynamically favoured. This type of movement sometimes is referred to as facilitated transport or facilitated diffusion.

Three main features distinguish uniport transport from passive diffusion. 1. the rate of transport is far higher than predicted 2.transport is specific 3.transport occurs via a limited number of transporter proteins rather than through out the phospholipids bilayer.

There are two forces which govern the movement of ions across selectively permeable membranes, the membrane electric potential and the ion concentration gradient. ATP driven ion pumps generate and maintain ionic gradients across the plasma membrane.

Endocytosis and exocytosis are active processes involving bulk transport of materials through membranes, either into cells(endocytosis) or out of cells (exocytosis).

Endocytosis occurs by an in folding or extension of the plasma membrane to form a vesicle or vacuole or vauole. It is of two types.

1.      Phagocytosis:(cell eating)-Substances are taken up in solid form. Cells involving in this process are called phagocytes and said to be phagocytic. (eg.) some white blood cells. A phagocytic vacuole is formed during the uptake.

2.      Pinocytosis (cell drinking)-Substances are taken up in liquid form. Vesicles which are very small are formed during intake. Pinocytosis is often associated with amoebiod protozozns, and in certain kidney cells involved in fluid exchange. It can also occur in plant cells.

Exocytosis is the reverse of endocytosis by which materials are removed from cells such as undigested remains from food vacuoles.