Grouping of Elements based on Electronic Configurations

Grouping of Elements based on Electronic Configurations

Variation of Electronic Configuration along the periods

Table 3.10 Electronic configuration of elements in a period 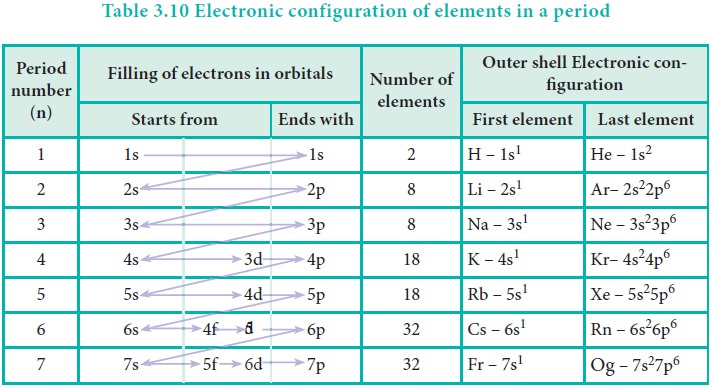 In the sixth period the filling of valence electrons starts with 6s orbital followed by 4f, 5d and 6p orbitals. The filling up of 4f orbitals begins with Cerium (Z=58) and ends at Lutetium (Z=71). These 14 elements constitute the first inner-transition series called Lanthanides. Similarly, in the seventh period 5f orbitals are filled, and it's -14 elements constitute the second inner-transition series called Actinides. These two series are placed separately at the bottom of the modern periodic table.

Variation of Electronic Configuration in the Groups:

The elements of group 1 and group 2 are called s-block elements, since the last valence electron enters the ns orbital. The group 1 elements are called alkali metals while the group 2 elements are called alkaline earth metals. These are soft metals and possess low melting and boiling points with low ionisation enthalpies. They are highly reactive and form ionic compounds. They are highly electropositive in nature and most of the elements imparts colour to the flame. We will study the properties of these group elements in detail in subsequent chapters.

The elements of the groups 3 to 12 are called d-block elements or transition elements with general valence shell electronic configuration ns1-2, (n-1)d1-10. These elements also show more than one oxidation state and form ionic, covalent and co-ordination compounds. They can form interstitial compounds and alloys which can also act as catalysts. These elements have high melting points and are good conductors of heat and electricity.

The lanthanides (4f1-14, 5d0-1, 6s2) and the actinides (5f0-14, 6d0-2, 7s2) are called f-block elements. These elements are metallic in nature and have high melting points. Their compounds are mostly coloured. These elements also show variable oxidation states.