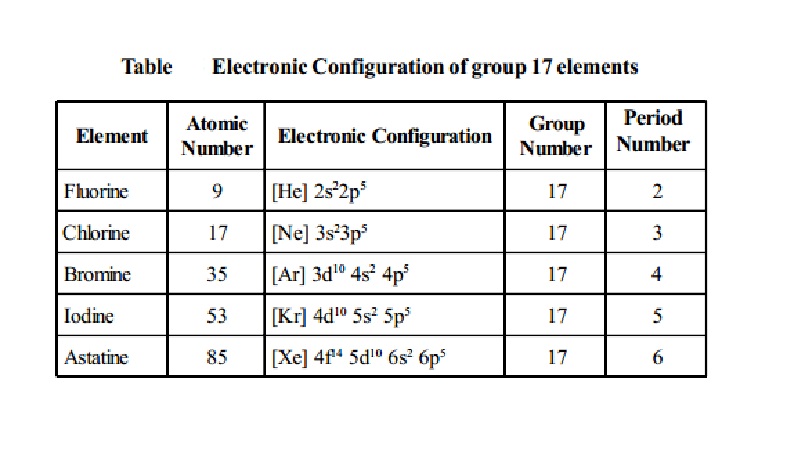 1. Oxidising power: An important feature of the halogen is their oxidising

property which is due to high electron affinity of halogen atoms. The oxidising power decreases from fluorine to iodine. Fluorine is the strongest oxidising agent. It oxidises other halide ions to halogens in solution or when dry.

2. Solubility: Halogens, being non-polar molecules, do not dissolve to a

considerable extent in a polar solvent like water. However, fluorine reacts with water readily forming a mixture of O2 and O3.

Chlorine, bromine and Iodine are more soluble in organic solvents such as CCl4, CHCl3 and produce yellow, brown and violet colour.

3. Hydrides of the Halogens (Hydrogen halides):

i) All halogens react with hydrogen to form volatile covalent hydrides of formula HX.

ii) These hydrides are called hydracids.

iv) Hydracids are the reducing agents.

v)    Except HF, all hydrogen halides are gases. HF is a liquid because of inter

vi) The acidic character of HX are in the following order.

Fluorine is the most reactive element among halogen. This is due to the minimum value of F-F bond dissociation energy.

O2 is liberated. Under similar conditions, the other halogens will give rise to

It has the greatest affinity for hydrogen, forming HF which is associated

due to the hydrogen bonding. Hydrofluoric acid is a weak acid whereas the other hydrohalic acids are strong acids.

salts with metals. NaF and NaHF2.

The salts of HF differ from the corresponding salts of other hydracids. AgF

is soluble in water while the other AgX are insoluble.

Being strongly electronegative it can have only a negative oxidation state

while the other halogens can have negative as well as positive oxidation state.

HF attacks glass while others do not.

Fluorine, because of the absence of d-orbitals in its valence shell does not

Industrially, hydrogen fluoride is obtained by heating fluorspar (CaF2) with

concentrated H2SO4 in a lead vessel.

HF distils over and the vapours are condensed in water in a lead receiver.

Aqueous HF thus obtained is stored in wax bottles. It cannot be stored in glass or silica bottles as it attacks silicates and silica.

glass. The glass article is first covered with a film on wax. The design to be etched is now drawn on the waxed surface and is then exposed to the action of hydrofluoric acid. Now the glass can be very soon etched. The wax is finally washed off with turpentine.

Fluorine does not occur free in nature. It occurs in the combined form. Dennis' Method: This was devised by Dennis, Veeder and Rochow in 1931. 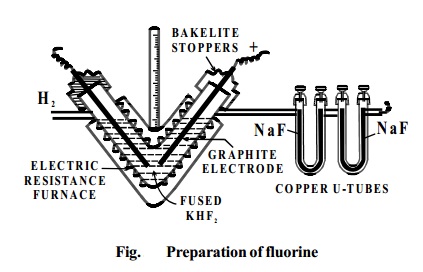 1. Action with Hydrogen: Hydrogen explodes violently in fluorine even in

2. Action with non-metals: Non-metals like carbon, silicon and phosphorus

4. Formation of Interhalogen compounds: It forms a variety of inter halogen

compounds with other halogens.

3. NaF is used as a preservative to prevent fermentation and also for preventing

Each halogen combines with another halogen to form several compounds

The bonds are essentially covalent because of the small electronegativity

difference, and the melting and boiling points increase as the difference in electronegativity increases.

The interhalogens are generally more reactive than the halogens (except F)

Fig.  for the ClF3 molecule. 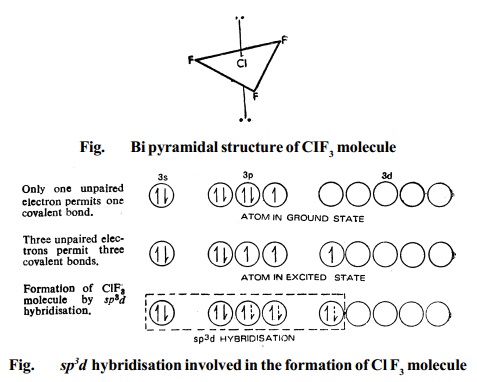 4. Type AX7 (IF7). This compound has a pentagonal bipyramidal structure since this is formed by sp3d3hybridisation.

An element A occupies group number 17 and period number 2, shows

anomalous behaviour. A reacts with water forms a mixture of B, C and acid D. B and C are allotropes. A also reacts with hydrogen violently even in dark togive an acid D. Identify A,B,C and D. write the reactions. 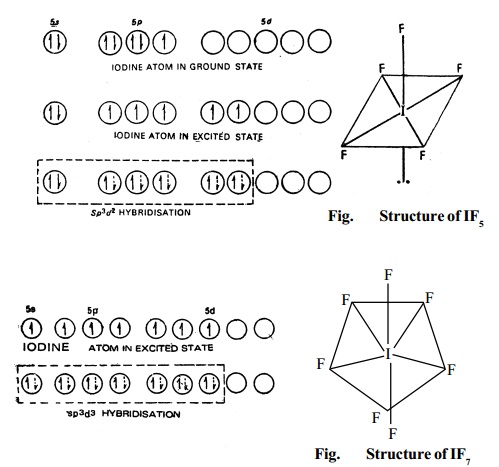