Folic acid functions in the transfer of one-carbon fragments in a wide variety of biosynthetic and catabolic reactions;

Folic acid functions in the transfer of one-carbon fragments in a wide variety of biosynthetic and catabolic reactions; it is therefore metabolically closely related to vitamin B12. Deficiency of either causes megaloblastic anemia, and the hematological effects of vitamin B12 deficiency are due to disturbance of folate metabolism.

Apart from liver, the main dietary sources of folate are fruits and vegetables. Although folate is widely distributed in foods, dietary deficiency is not uncom-mon, and a number of commonly used drugs can cause folate depletion. More importantly, there is good evidence that intakes of folate considerably higher than normal dietary levels reduce the risk of neural tube defects, and, where cereal products are not fortified with folate by law, pregnant women are recommended to take supplements. There is also evi-dence that high intakes of folate may be effective in reducing plasma homocysteine in subjects genetically at risk of hyperhomocystinemia (some 10–20% of the population), which may reduce the risk of ischemic heart disease and stroke.

“Folate” is the preferred trivial name for pteroyl-glutamate, although both “folate” and “folic acid” may be used as a generic descriptor to include various polyglutamates. PteGlu2 is sometimes referred to as folic acid diglutamate, PteGlu3 as folic acid trigluta-mate, and so on. 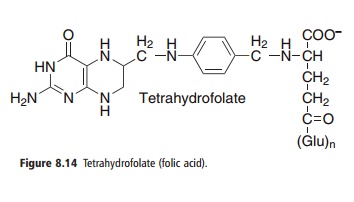 Tetrahydrofolate can carry one-carbon fragments attached to N-5 (formyl, formimino, or methyl groups), N-10 (formyl), or bridging N-5–N-10 (methy-lene or methenyl groups). 5-Formyl-tetrahydrofolate is more stable to atmospheric oxidation than is folate, and is therefore commonly used in pharmaceutical preparations; it is also known as folinic acid, and the synthetic (racemic) compound as leucovorin.

The extent to which the different forms of folate can be absorbed varies; on average only about half of the folate in the diet is available, compared with more or less complete availability of the monoglutamate. To permit calculation of folate intakes, the dietary folate equivalent has been defined as 1 μg mixed food folates or 0.6 μg free folic acid. On this basis, total dietary folate equivalents = μg food folate + 1.7 × synthetic (free) folic acid.

Absorption and metabolism of folate

About 80% of dietary folate is as polyglutamates; a variable amount may be substituted with various one-carbon fragments or be present as dihydrofolate derivatives. Folate conjugates are hydrolyzed in the small intestine by conjugase (pteroylpolyglutamate hydrolase), a zinc-dependent enzyme of the pancre-atic juice, bile, and mucosal brush border; zinc defi-ciency can impair folate absorption.

Free folate, released by conjugase action, is absorbed by active transport in the jejunum. The folate in milk is mainly bound to a specific binding protein; the protein–tetrahydrofolate complex is absorbed intact, mainly in the ileum, by a mechanism that is distinct from the active transport system for the absorption of free folate. The biological availability of folate from milk, or of folate from diets to which milk has been added, is considerably greater than that of unbound folate.

Much of the dietary folate undergoes methylation and reduction within the intestinal mucosa, so that what enters the portal bloodstream is largely 5-methyl-tetrahydrofolate. Other substituted and unsubstituted folate monoglutamates, and dihydrofo-late, are also absorbed; they are reduced and methyl-ated in the liver, then secreted in the bile. The liver also takes up various folates released by tissues; again, these are reduced, methylated and secreted in the bile.

The total daily enterohepatic circulation of folate is equivalent to about one-third of the dietary intake.

Despite this, there is very little fecal loss of folate; jejunal absorption of methyl-tetrahydrofolate is a very efficient process, and the fecal excretion of some 450 nmol (200μg) of folates per day represents syn-thesis by intestinal flora and does not reflect intake to any significant extent.

Methyl-tetrahydrofolate circulates bound to albumin, and is available for uptake by extrahepatic tissues, where it is trapped by formation of polyglutamates, which do not cross cell membranes.

The main circulating folate is methyl-tetrahydro-folate, which is a poor substrate for polyglutamylation; demethylation by the action of methionine synthetase  is required for effective metabolic trap-ping of folate. In vitamin B12 deficiency, when methio-nine synthetase activity is impaired, there will therefore be impairment of the uptake of folate into tissues.

There is very little urinary loss of folate, only some 5–10 nmol/day. Not only is most folate in plasma bound to proteins (either folate binding protein for unsubstituted folate or albumin for methyl-tetrahydrofolate), and thus protected from glomeru-lar filtration, but the renal brush border has a high concentration of folate binding protein, which acts to reabsorb any filtered in the urine.

The catabolism of folate is largely by cleavage of the C-9–N-10 bond, catalyzed by carboxypeptidase G.

The p-aminobenzoic acid moiety is amidated and excreted in the urine as p-acetamidobenzoate and p-acetamidobenzoyl-glutamate; pterin is excreted either unchanged or as a variety of biologically inactive compounds.