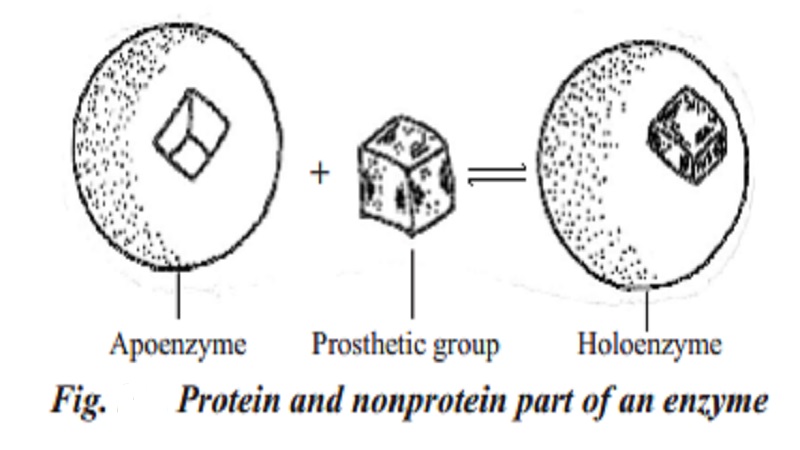 Enzymes are biological catalysts, which activate various biochemical reactions of a living cell in a highly specific and precise manner. Enzymology is the study of enzymes. The name enzyme was coined by Kuhne in 1878. Pasteur recognised that some microorganisms like yeasts have got a capacity to cause fermentation in wine.

Enzymes are biological catalysts, which activate various biochemical reactions of a living cell in a highly specific and precise manner. Enzymology is the study of enzymes. The name enzyme was coined by Kuhne in 1878. Pasteur recognised that some microorganisms like yeasts have got a capacity to cause fermentation in wine. In 1897, Buchner discovered that yeast extract could bring about fermentation of grape juice, like the living yeast cells. He also observed that the extract has lost its catalytic activity on boiling. He coined the word zymase for the active principle involved in the fermentation. The substance on which the enzyme acts is called substrate. Enzymes are essentially proteins but all proteins are not enzymes.

Enzymes are classified based on the kinds of reactions they catalyze.

These enzymes catalyze oxidation or reduction of their substrates by removing or adding electrons from or to substrates. eg. dehydrogenase, oxidase and reductase.

These enzymes transfer a group from one substrate to other. eg. transaminase.

These enzymes split larger molecules into smaller ones by the hydrolysis of water and breaking of specific covalent bonds. eg. carbohydrase.

These enzymes catalyze the cleavage of specific covalent bonds and removal of groups without hydrolysis. eg. Histidine decarboxylase.

The enzymes that catalyzes rearrangement of atoms within a molecule to form isomers are called isomerases. eg. phosphohexoisomerase.

Ligases catalyze the formation of C - C, C - S, C - O and C - N bonds. The energy for the reaction is derived by the hydrolysis of ATP. eg. pyruvate carboxylase.

1.        Like inorganic catalysts, the enzymes are active in very small amounts and remain unchanged on completion of the reaction.

2.        Enzymes are very specific in their action. i.e. a particular enzyme usually acts on a particular substrates to catalyze particular type of reaction. But some times, the same reaction may be catalyzed by more than one enzyme. Such enzymes are called isoenzymes.

4.        The catalytic property of the enzyme is dependent on pH. The specific pH at which the enzyme activity is high is called optimum pH. Different types of enzymes have different optimum pH values. Most intracellular enzymes function will be around neutral pH. Tripsins are active in alkaline medium, diastase in neutral medium while pepsin in acidic medium.

5.        Enzymes are sensitive to inhibitors. The chemical substance that combines with the enzymes and inhibits its catalytic activity is called an inhibitor. eg. Cyanides. A-><-B.

In most of the cases, the reactions catalyzed by the enzymes are reversible depending upon the requirements of the cell.

Two theories have been proposed to explain the mechanism and enzyme action. They are Fischer's Lock and key theory and Koshland's induced fit theory.

When a dissimilar substrate approaches the enzyme, it cannot combine with the active site of the enzyme, as a wrong key cannot open the lock. Thus, the enzyme action is inhibited.

Induced fit theory was pro-posed by Koshland. Proteins are not rigid. The substrate induces the enzyme to adjust its shape leading to the formation of enzyme sub-strate complex. Then, the enzyme acts on substrate and forms products. Many enzymes function in this way.

In a biochemical reaction, there is an energy barrier between the reactants and the products. Only those molecules which possess a certain amount of excess energy above the average energy of normal molecules are able to react to form products. This excess energy which a normal molecule must aquire in order to react is known as energy of activation (Ea). This energy of activation determines the rate of reaction. Higher the value of Ea, lower is the rate of reaction and greater stability. At higher temperature, the rate of chemical reaction becomes faster, because increased temperature brings about increased number of activated molecules.

But in the case of enzyme catalyzed reaction, the rate of reaction is optimum at normal body temperature. Because all the molecules either energy-rich or energy-poor combine with the active site of the enzyme to form enzyme substrate complex. The latter breaks into enzyme and product. Thus, the enzyme acts by lowering the energy of activation of the reactions i.e. reducing the energy barrier and increases the rate of reaction.