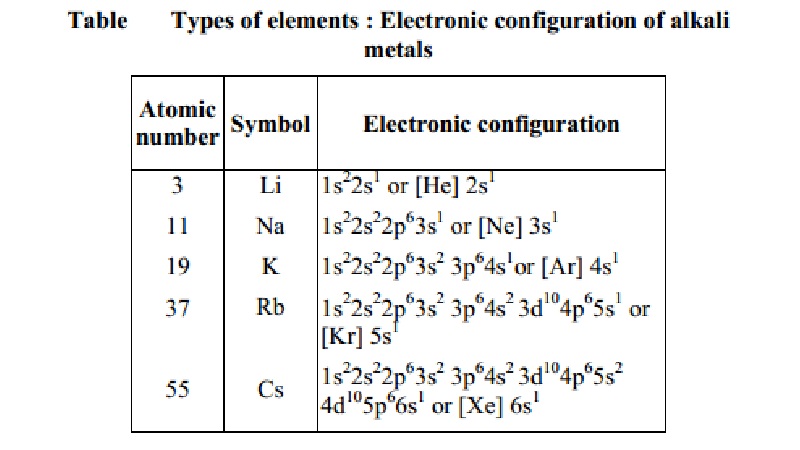 There is a close connection between the electronic configuration of the elements and the long form of the Periodic Table. We have already learnt that an electron in an atom is characterized by a set of four quantum numbers and the principal quantum number (n) defines the main energy level known as the Shell.

There is a close connection between the electronic configuration of the elements and the long form of the Periodic Table. We have already learnt that an electron in an atom is characterized by a set of four quantum numbers and the principal quantum number (n) defines the main energy level known as the Shell. The electronic configuration of elements can be best studied in terms of variations in periods and groups of the periodic table.

(a) Electronic Configuration in periods

Each successive period in the periodic table is associated with the filling up of the next higher principal energy level (n=1, n=2,etc.). It can be readily seen that the number of elements in each period is twice the number of atomic orbitals available in the energy level that is being filled. The first period starts with the filling of the lowest level (1s) and has thus the two elements-hydrogen (1s1) and helium (1s2) when the first shell (K) is completed. The second period starts with lithium and the third electron enters the 2s orbital. The next element, beryllium has four electrons and has the electronic configuration 1s22s2. Starting from the next element boron, the 2p orbitals are filled with electrons when the L shell is completed at neon (2s22p6). Thus there are 8 elements in the second period. The third period (n=3) begins at sodium, and the added electron enters a 3s orbital. Successive filling of 3s and 3p orbitals gives rise to the third period of 8 elements from sodium to argon.

Elements in the same vertical column or group have similar electronic configurations, have the same number of electrons in the outer orbitals, and similar properties. Group 1 (the alkali metals) is an example.

Thus it can be seen that the properties of an element have periodic dependence upon the atomic number and not on relative atomic mass (Table). 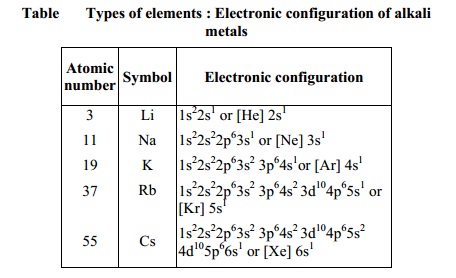 The aufbau principle and the electronic configuration of atoms provide a theoretical foundation for the periodic classification. The elements in a vertical column of the periodic table constitute a group or family and exhibit similar chemical behaviour. Strictly, helium belongs to the s-block but its positioning in the p-block along with other group 18 elements is justified because it has a completely filled valence shell (1s2) and as a result, exhibits properties characteristic of other noble gases. The other exception is hydrogen. It has a lone s- electron and hence can be placed in group 1 (alkali metals). It can also gain an electron to achieve a noble gas arrangement and hence it can behave similar to a group 17 (halogen family) elements. Because it is a special case, we shall place hydrogen separately at the top of the Periodic Table. We will briefly discuss the salient features of the four types of elements marked in the periodic table.

The elements of group 1 (alkali metals) and group 2 (alkaline earth metals) which have ns1 and ns2 outermost electronic configuration belong to the s-block elements. They are all reactive metals with low ionization enthalpies. They lose the outermost electron(s) readily to form 1+ (in the case of alkali metal) or 2+ ions (in the case of alkaline earth metals). The metallic character and the reactivity increase as we go down the group. The compounds of the s-block elements, with the exception of those of beryllium are predominantly ionic.

The p-Block Elements comprise those belonging to groups 13 to 18 and together with the s-block elements are called the Representative Elements or Main Group Elements. The outermost electronic configuration varies from ns2np1 to ns2np6 in each period. Each period ends in a noble gas with a closed shell ns2np6 configuration. All the orbitals in the valence shell of the noble gases are completely filled by electrons and it is very difficult to alter this stable arrangement by the addition or removal of electrons. The noble gases thus exhibit very low chemical reactivity. Preceding the noble gas family are two chemically important groups of nonmetals. They are the halogens (groups 17) and chalcogens (group 16). These two groups of elements have higher negative electron gain enthalpies and readily add one or two electrons respectively to attain the stable noble gas configuration. The nonmetallic character increases as we move from left to right across a period and metallic character increases as we go down the group.

These are the elements of group 3 to 12 in the center of the periodic table. These elements are characterized by filling of inner d orbitals by electrons and are therefore referred to as d-Block Elements. These elements have the outer electronic configuration (n-1) d1-10 ns1-2. They are all metals. They mostly form colored ions and exhibit variable valency. However, Zn, Cd and Hg, which have the (n-1)d10 ns2 electronic configuration, do not show most of the properties of transition elements in a way, transition metals form a bridge between the chemically active metals of s-block elements and less active metals of groups 13 and 14 and thus take their familiar name 'transition elements'

The two rows of elements at the bottom of the periodic table, called the Lanthanoids 58Ce-71Lu and Actinoids. 90Th-103Lr are characterized by the outer electronic configuration (n-2) f1-14 (n-1) d0-10ns2. The last electron added to each element is an f-electron. These two series of elements are hence called the inner transition elements (f-Block Elements). They are all metals within each series, the properties of the elements are quite similar. The chemistry of the early actinoids is more complicated than the corresponding lanthanoids, due to the large number of oxidation states possible for these actinoid elements. Actinoid elements are radioactive. Many of the actinoid elements have been made only in nanogram quantities or less by nuclear reactions and their chemistry is not fully studied. The elements coming after uranium are called transuranium elements.

The elements Z=117 and 120 have not yet been discovered. In which family / group would you place these elements and also give the electronic configuration in each case.

In addition to displaying the classification of elements into s-, p-, d-, and f-blocks, the periodic table shows another broad classification of elements based on their properties. The elements can be divided into Metals and Non-metals. Metals comprise more than 75% of all known elements and appear on the left side of the Periodic Table. Metals are usually solids at room temperature (Mercury is an exception); they have high melting and boiling points. They are good conductors of heat and electricity. They are malleable (can be flattened into thin sheets by hammering) and ductile (can be drawn into wires). In contrast non-metals are located at the top right hand side of the Periodic Table. Non-metals are usually solids or gases at room temperature with low melting and boiling points. They are poor conductors of heat and electricity. Most non-metallic solids are brittle and are neither malleable nor ductile. The elements become more metallic as we go down a group; the non-metallic character increases as one goes from left to right across the Periodic Table. The change form metallic to non-metallic character is not abrupt as shown by the thick zig-zag line in the periodic table. The elements (e.g. germanium, silicon, arsenic, antimony and tellurium) bordering this line and running diagonally across the Periodic Table show properties that are characteristic of both metals and non-metals. These elements are called Semi Metals or Metalloids.

Arrange the following elements in the increasing order of metallic character: Si, Be, Mg, Na, P.