Apart from its blood vessels and some neuroglial elements, the whole of the nervous system is derived from ectoderm.

Apart from its blood vessels and some neuroglial elements, the whole of the nervous system is derived from ectoderm. At the time when the nervous system begins to develop the embryo is in the form of a three-layered disc (Figs 1.25, 1.26). In the middle line observe the prochordal plate (cranially) and the primitive streak caudally. The cranial end of the primitive streak is thickened. This thickened cranial end is called the primitive knot. Between the prochordal plate and the primitive knot we see a midline structure the developing notochord. The notochord lies between ectoderm and endoderm. 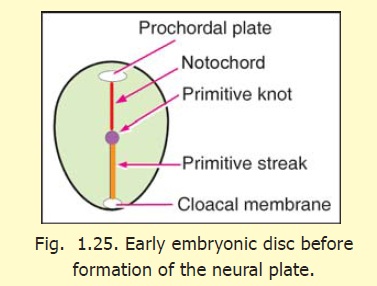 The part of the ectoderm that is destined to give origin to the brain and spinal cord is situated on the dorsal aspect of the embryonic disc, in the midline, and overlies the developing notochord (Figs. 1.27 A, B). It soon becomes thickened to form theneural plate (Fig. 1.27 B). 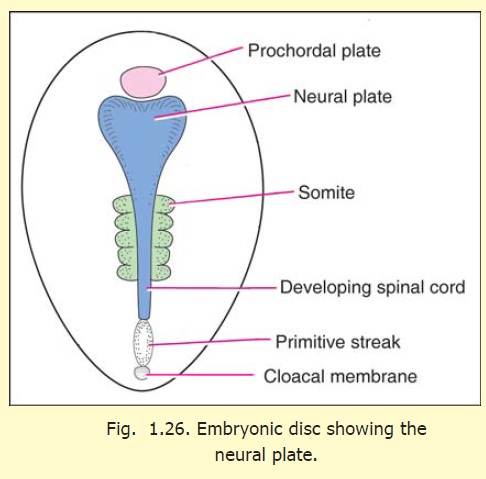 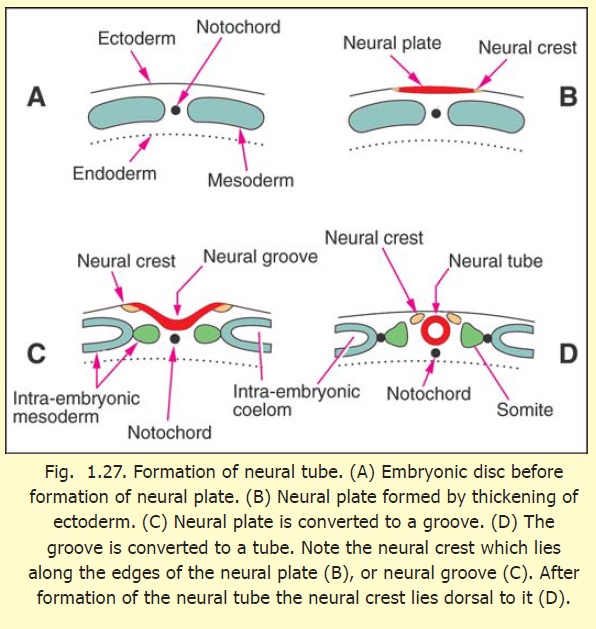 1.              The whole length of the neural tube remains unclosed. This results in the condition calledposterior rachischisis.

2.              The neural tube remains open in the region of the brain. This results inanencephaly.Braintissue which is exposed brain tissue degenerates.

3.              Non-fusion of the neural tube is of necessity associated with non-closure of the cranium (craniumbifidum) or of the vertebral canal (spina bifida).

The neural tube is at first lined by a single layer of cells, (Fig. 1.28 A). These proliferate to form several layers (Fig. 1.28 B). Nearest the lumen of the tube is the matrix cell layer (also called primitive ependymal or germinal layer). The cells of this layer give rise to nerve cells, to neuroglial cells, and also to more germinal cells. Next comes the mantle layer in which are seen the developing nerve cells, and neuroglial cells. The outermost layer, termed the marginal zone, contains no nerve cells. It consists of a reticulum formed by protoplasmic processes of developing neuroglial cells (spongioblasts). It provides a framework into which the processes of nerve cells developing in the mantle layer can grow. (According to recent investigations the wall of the neural tube consists of only one layer of elongated cells. The multilayered appearance is produced by nuclei being placed at different levels as in a pseudostratified epithelium). 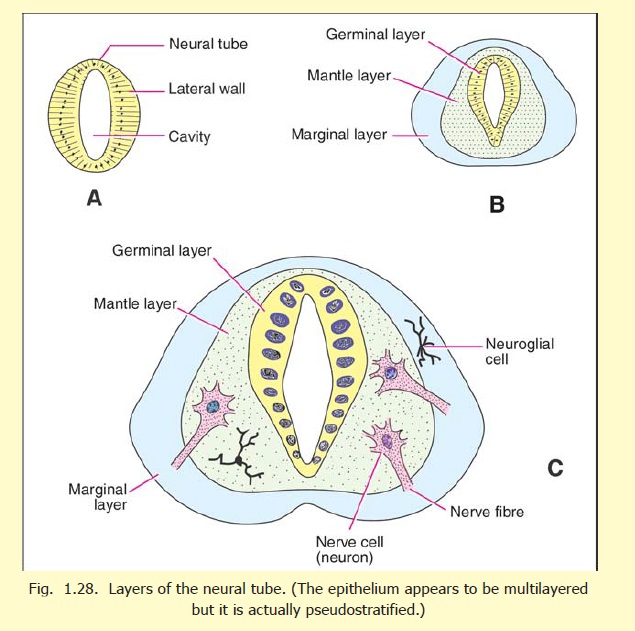 The stages in the formation of a nerve cell are as follows:

4.              The process of the cell that does not disappear now elongates, and on the side opposite to it numerous smaller processes form. At this stage the cell is called a multipolar neuroblast (Fig. 1.29 D).

5.              The main process of the multipolar neuroblast now grows into the marginal layer, and becomes the axon of the nerve cell (Fig. 1.29 B). The axon can grow to a considerable length. It may either remain within the central nervous system, or may grow out of it as an efferent nerve fibre of a peripheral nerve. At its destination it establishes connections, either with the cell bodies and dendrites of other neurons, or with an effector organ (e.g. muscle).

6.              The smaller processes of the neuroblast are the dendrites. These ramify and establish connections with other nerve cells.

7.              At first the cytoplasm of the nerve cell is homogeneous. Later Nissl’s granules make their appearance. After their formation, neurons lose the ability to divide. 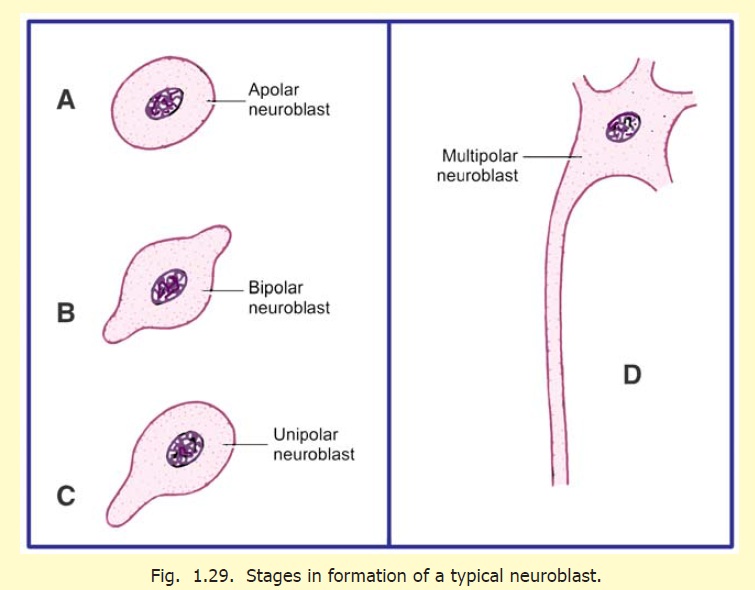 Neuroglial cells are also formed from germinal cells of the ependymal layer. These cells (glioblasts) migrate to the mantle and marginal zones as medulloblasts (also called spongioblasts), which differentiate either into astroblasts, and subsequently intoastrocytes, or into oligodendroblasts and then into oligodendrocytes. There is a third type of neuroglial cell called microglia. This type does not develop from the cells of the neural tube, but migrates into it along with blood vessels. These cells are believed to be of mesodermal origin.

We have seen above that the ependymal (or neuroepithelial) cells give rise both to neuroblasts and to neuroglia. However, these two cell types are not formed simultaneously. The neuroblasts are formed first. Neuroglial cells are formed after the differentiation of neuroblasts is completed.

The formation of the myelin sheath by Schwann cells and oligodendrocytes has already been explained. Nerve fibres in different parts of the brain, and spinal cord, become myelinated at different stages of development. The process begins during the fourth month of intrauterine life, but is not completed until the child is two to three years old. Nerve fibres become fully functional only after they have acquired their myelin sheaths.

The blood vessels of the brain, and their surrounding connective tissue, are not derived from the neural tube. These are mesodermal in origin and invade the developing brain and spinal cord from the surrounding mesoderm.

The development of the pia mater and the arachnoid mater (leptomeninges) is not definitely understood. According to some workers, these are derived from the neural crest. The dura mater develops from the mesoderm surrounding the neural tube.

There can be errors in the closure of the neural tube. This leads to congenital anomalies line anencephaly and rachischisis.