Before we begin to learn constructing certain quadrilaterals, it is essential to recall their basic properties that would help us during the process.

Before we begin to learn constructing certain quadrilaterals, it is essential to recall their basic properties that would help us during the process. We will try to do this by performing some activities and then sum them up.

1. Place a pair of unequal sticks (say pieces of broomstick) such that they have their end points joined at one end.

2. Now place another such pair meeting the free ends of the first pair.

What is the figure enclosed? It is a quadrilateral. Name it as ABCD. How many sides are there? What are its diagonals? Are the diagonals equal? Are the angles equal?

In the above activity can you get a quadrilateral in which

(i) All the four angles are acute.

(ii) One of the angles is obtuse.

(iii) Two of the angles are obtuse.

(iv) One of the angles is a right angle.

(v) Two of the angles are right angles.

(vi) The diagonals are mutually ┴r. 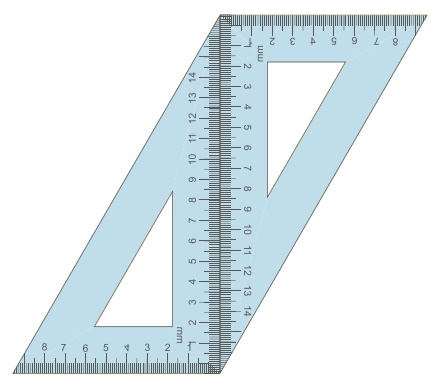 (i) What is the shape we get? It is a parallelogram.

(ii) Are the opposite sides parallel? − Answer: Yes

(iii) Are the opposite sides equal? − Answer: Yes

(iv) Are the diagonals equal? − Answer: No

(v) Can you get this shape by using any other pair of identical set-squares? − Answer: Yes 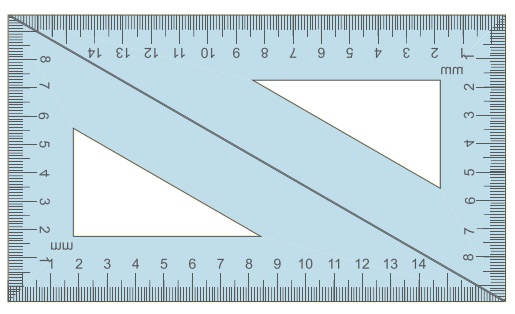 (i) What is the shape we get? − Answer: Rectangle

(ii) Is it a parallelogram? Answer: Yes

It is a quadrilateral; infact it is a rectangle. (How?) Answer: Opposits sides are equal.  All angles = 90°

(iii) What can we say about its lengths of sides, angles and diagonals?

Opposite sides are equal 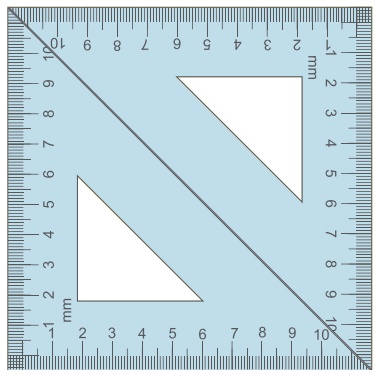 (i) How does the figure change now? Is it a parallelogram? It becomes a square! (How did it happen?)

Answer: All sides are equal. So it is square.

All sides are equal

(iii) How does it diﬀer from the list we prepared for the rectangle?

All sides are equal.

Diagonals bisects each other.

4. We again use four identical 30º –60º –90º set- squares for this activity. Note carefully how they are placed touching one another. 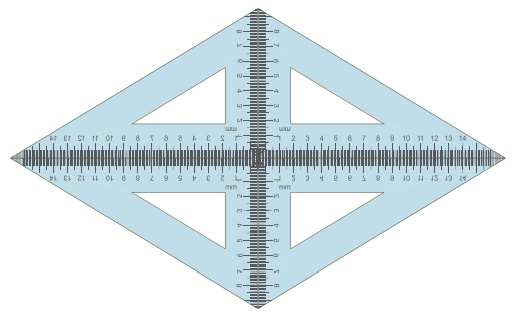 (i) Do we get a parallelogram now? Answer: Yes

opposite sides are equal and parallel.

(iii) What is special about their diagonals?

Based on the outcome of the above activities, we can list out the various properties of the above quadrilaterals, all of which happen to be parallelograms! 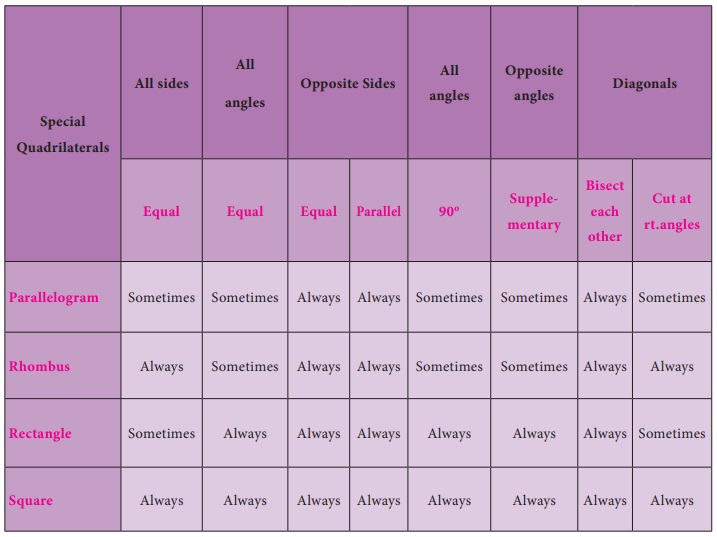 (a) A square is a special rectangle. [Answer: True]

(b) A square is a parallelogram. [Answer: True]

(c) A square is a special rhombus. [Answer: True]

(d) A rectangle is a parallelogram [Answer: False]

(a) which have diagonals bisecting each other.

(b) In which the diagonals are perpendicular bisectors of each other.

(c) Which have diagonals of diﬀerent lengths.

(d) Which have equal diagonals.

(e) Which have parallel opposite sides.

(f) In which opposite angles are equal.

3. Two sticks are placed on a ruled sheet as shown. What figure is formed if the four corners of the sticks are joined?

(a) Two unequal sticks. Placed such that their midpoints coincide. 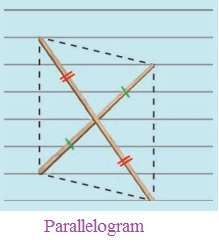 (b) Two equal sticks. Placed such that their midpoints coincide. 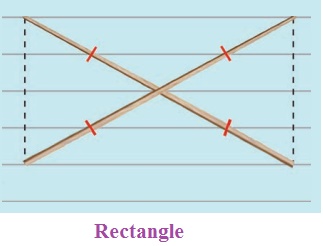 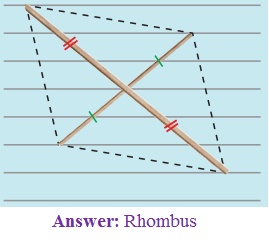 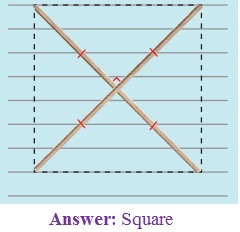 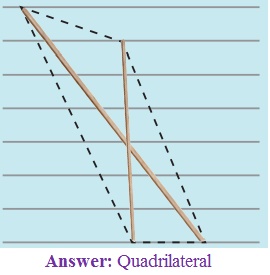 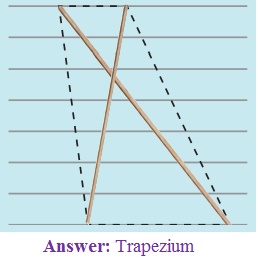