The Dynamo was the first electrical generator capable of delivering power for industry. The dynamo uses electromagnetic principles to convert mechanical rotation into an alternating electric current. A dynamo machine consists of a stationary structure which generates a strong magnetic field, and a set of rotating windings which turn within that field. On small machines the magnetic field may be provided by a permanent magnet; larger machines have the magnetic field created by electromagnets. The energy conversion in generator is based on the principle of the production of dynamically induced e.m.f. whenever a conductor cuts magneticic flux, dynamically induced e.m.f is produced in it according to Faraday's Laws of Electromagnetic induction. This e.m.f causes a current to flow if the conductor circuit is closed.

A D.C. machine consists mainly of two part the stationary part called stator and the rotating part called rotor.The stator consists of main poles used to produce magnetic flux ,commutating poles or interpoles in between the main poles to avoid sparking at the commutator but in the case of small machines sometimes the interpoles are avoided and finally the frame or yoke which forms the supporting structure of the machine. The rotor consist of an armature a cylindrical metallic body or core with slots in it to place armature windings or bars,a commutator and brush gears The magnetic flux path in a motor or generator is show below and it is called the magnetic structure of generator or motor.

The major parts can be identified as,

Why we use cast steel instead of cast iron for the construction of Yoke?

In early days Yoke was made up of cast iron but now it is replaced by cast steel.This is because cast iron is saturated by a flux density of 0.8 Wb/sq.m where as saturation with cast iron steel is about 1.5 Wb/sq.m.So for the same magnetic flux density the cross section area needed for cast steel is less than cast iron hence the weight of the machine too.If we use cast iron there may be chances of blow holes in it while casting.so now rolled steels are developed and these have consistent magnetic and mechanical properties. 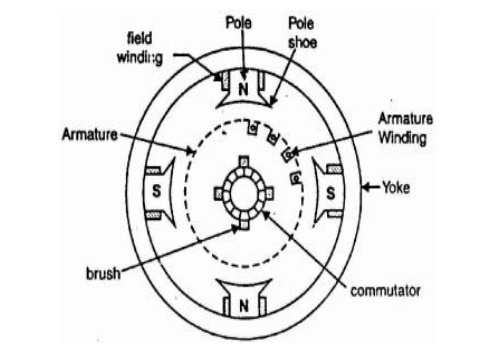 Solid poles of fabricated steel with separate/integral pole shoes are fastened to the frame by means of bolts. Pole shoes are generally laminated. Sometimes pole body and pole shoe are formed from the same laminations. The pole shoes are shaped so as to have a slightly increased air gap at the tips. Inter-poles are small additional poles located in between the main poles.

These can be solid, or laminated just as the main poles. These are also fastened to the yoke by bolts. Sometimes the yoke may be slotted to receive these poles. The inter poles could be of tapered section or of uniform cross section. These are also called as commutating poles or com poles. The width of the tip of the com pole can be about a rotor slot pitch.

The armature is where the moving conductors are located. The armature is constructed by stacking laminated sheets of silicon steel. Thickness of these lamination is kept low to reduce eddy current losses. As the laminations carry alternating flux the choice of suitable material, insulation coating on the laminations, stacking it etc are to be done more carefully. The core is divided into packets to facilitate ventilation. The winding cannot be placed on the surface of the rotor due to the mechanical forces coming on the same. Open parallel sided equally spaced slots are normally punched in the rotor laminations. 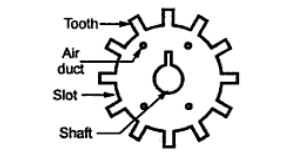 These slots house the armature winding. Large sized machines employ a spider on which the laminations are stacked in segments. End plates are suitably shaped so as to serve as ’Winding supporters’. Armature construction process must ensure provision of sufficient axial and radial ducts to facilitate easy removal of heat from the armature winding.

In the case of wound field machines (as against permanent magnet excited machines) the field winding takes the form of a concentric coil wound around the main poles. These carry the excitation current and produce the main field in the machine. Thus the poles are created electromagnetically. Two types of windings are generally employed. In shunt winding large number of turns of small section copper conductor is used. The resistance of such winding would be an order of magnitude larger than the armature winding resistance. In the case of series winding a few turns of heavy cross section conductor is used. The resistance of such windings is low and is comparable to armature resistance. Some machines may have both the windings on the poles. The total ampere turns required to establish the necessary flux under the poles is calculated from the magnetic circuit calculations. The total mmf required is divided equally between north and south poles as the poles are produced in pairs. The mmf required to be shared between shunt and series windings are apportioned as per the design requirements. As these work on the same magnetic system they are in the form of concentric coils. Mmf ’per pole’ is normally used in these calculations. Armature winding As mentioned earlier, if the armature coils are wound on the surface of the armature, such construction becomes mechanically weak. The conductors may fly away when the armature starts rotating. Hence the armature windings are in general pre-formed, taped and lowered into the open slots on the armature. In the case of small machines, they can be hand wound. The coils are prevented from flying out due to the centrifugal forces by means of bands of steel wire on the surface of the rotor in small groves cut into it. In the case of large machines slot wedges are additionally used to restrain the coils from flying away. The end portion of the windings are taped at the free end and bound to the winding carrier ring of the armature at the commutator end. The armature must be dynamically balanced to reduce the centrifugal forces at the operating speeds. Compensating winding One may find a bar winding housed in the slots on the pole shoes. This is mostly found in d.c. machines of very large rating. Such winding is called compensating winding. In smaller machines, they may be absent.

Commutator is the key element which made the d.c. machine of the present day possible. It consists of copper segments tightly fastened together with mica/micanite insulating separators

Brushes rest on the surface of the commutator. Normally electro-graphite is used as brush material. The actual composition of the brush depends on the peripheral speed of the commutator and the working voltage. The hardness of the graphite brush is selected to be lower than that of the commutator. When the brush wears out the graphite works as a solid lubricant reducing frictional coefficient. More number of relatively smaller width brushes are preferred in place of large broad brushes. The brush holders provide slots for the brushes to be placed. The connection Brush holder with a Brush and Positioning of the brush on the commutator from the brush is taken out by means of flexible pigtail. The brushes are kept pressed on the commutator with the help of springs. This is to ensure proper contact between the brushes and the commutator even under high speeds of operation. Jumping of brushes must be avoided to ensure arc free current collection and to keep the brushcontact drop low. Other mechanical parts End covers, fan and shaft bearings form other important mechanical parts. End covers are completely solid or have opening for ventilation. They support the bearings which are on the shaft. Proper machining is to be ensured for easy assembly. Fans can be external or internal. In most machines the fan is on the non-commutator end sucking the air from the commutator end and throwing the same out. Adequate quantity of hot air removal has to be ensured. Bearings Small machines employ ball bearings at both ends. For larger machines roller bearings are used especially at the driving end. The bearings are mounted press-fit on the shaft. They are housed inside the end shield in such a manner that it is not necessary to remove the bearings from the shaft for dismantling.