A TRANSFORMER is a device that transfers electrical energy from one circuit to another by electromagnetic induction (transformer action). The electrical energy is always transferred without a change in frequency, but may involve changes in magnitudes of voltage and current.

A TRANSFORMER is a device that transfers electrical energy from one circuit to another by electromagnetic induction (transformer action). The electrical energy is always transferred without a change in frequency, but may involve changes in magnitudes of voltage and current. Because a transformer works on the principle of electromagnetic induction, it must be used with an input source voltage that varies in amplitude. There are many types of power that fit this description; for ease of explanation and understanding, transformer action will be explained using an ac voltage as the input source.

BASIC OPERATION OF A TRANSFORMER

In its most basic form a transformer consists of: A primary coil or winding.

A secondary coil or winding.

A core that supports the coils or windings.

A transformer can be defined as a static device which helps in the transformation of electric power in one circuit to electric power of the same frequency in another circuit. The voltage can be raised or lowered in a circuit, but with a proportional increase or decrease in the current ratings.

The main principle of operation of a transformer is mutual inductance between two circuits which is linked by a common magnetic flux. A basic transformer consists of two coils that are electrically separate and inductive, but are magnetically linked through a path of reluctance. The working principle of the transformer can be understood from the figure below. 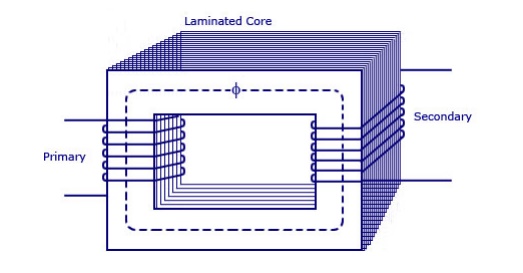 As shown above the transformer has primary and secondary windings. The core laminations are joined in the form of strips in between the strips you can see that there are some narrow gaps right through the cross-section of the core. These staggered joints are said to be

If the second coil circuit is closed, a current flows in it and thus electrical energy is transferred magnetically from the first to the second coil.

In short, a transformer carries the operations shown below:

Transfer of electric power from one circuit to another.

Transfer of electric power without any change in frequency.

Transfer with the principle of electromagnetic induction.

The two electrical circuits are linked by mutual induction

Two coils of wire (called windings) are wound on some type of core material. In some cases the coils of wire are wound on a cylindrical or rectangular cardboard form. In effect, the core material is air and the transformer is called an AIR-CORE TRANSFORMER. Transformers used at low frequencies, such as 60 hertz and 400 hertz, require a core of low-reluctance magnetic material, usually iron. This type of transformer is called an IRON-CORE TRANSFORMER. Most power transformers are of the iron-core type.

The principle parts of a transformer and their functions are:

The CORE, which provides a path for the magnetic lines of flux.

The PRIMARY WINDING, which receives energy from the ac source.

The SECONDARY WINDING, which receives energy from the primary winding and delivers it to the load.

The ENCLOSURE, which protects the above components from dirt, moisture, and mechanical damage. 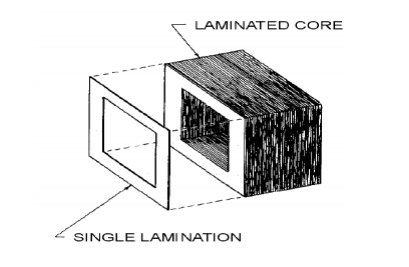 There are two main shapes of cores used in laminated-steel-core transformers. One is the HOLLOWCORE, so named because the core is shaped with a hollow square through the center. This shape of core. Notice that the core is made up of many laminations of steel it shows how the transformer windings are wrapped around both sides of the core.