The three most important characteristics or curves of a d.c generator are

This curve shows the relation between the generated e.m.f. at no-load (E0) and the field current (If) at constant speed. It is also known as magnetic characteristic or no-load saturation curve. Its shape is practically the same for all generators whether separately or self-excited. The data for O.C.C. curve are obtained experimentally by operating the generator at no load and constant speed and recording the change in terminal voltage as the field current is varied.

This curve shows the relation between the terminal voltage (V) and load current (IL). The terminal voltage V will be less than E due to voltage drop in the armature circuit. Therefore, this curve will lie below the internal characteristic. This characteristic is very important in determining the suitability of a generator for a given purpose. It can be obtained by making simultaneous

Fig. shows the connections of a series wound generator. Since there is only one current (that which flows through the whole machine), the load currentis the same as the exciting current. 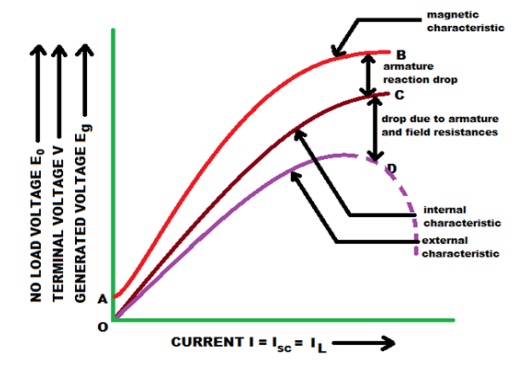 Curve 1 shows the open circuit characteristic (O.C.C.) of a series generator. It can be obtainedexperimentally by disconnecting the field winding from the machine and exciting it from aseparate d.c. source

Curve 3 shows the external characteristic of a series generator. It gives the relation between terminal voltage and load current IL.

Fig shows the connections of a shunt wound generator. The armature current Ia splits up into two parts; a small fraction Ish flowing through shunt field winding while the major part IL goes to the external load. 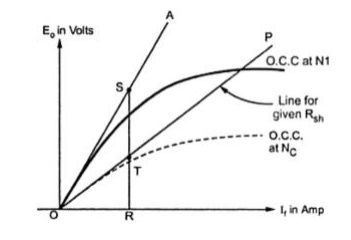 The O.C.C. of a shunt generator is similar in shape to that of a series generator as shown in Fig. The line OA represents the shunt field circuit resistance. When the generator is run at normal speed, it will build up a voltage OM. At no-load, the terminal voltage of the generator will be constant (= OM) represented by the horizontal dotted line MC.

When the generator is loaded, flux per pole is reduced due to armature reaction. Therefore, e.m.f. E generated on load is less than the e.m.f. generated at no load.As a result, the internal characteristic (E/Ia) drops down slightly as shown in Fig.

Curve 2 shows the external characteristic of a shunt generator. It gives the relation between terminal voltage V and load current IL. 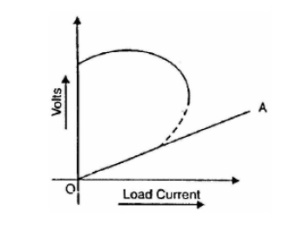 There are two critical resistances for a shunt generator viz.,

(ii)             critical external resistance. For the shunt generator to build up voltage, the former should not be exceeded and the latter must not be gone below 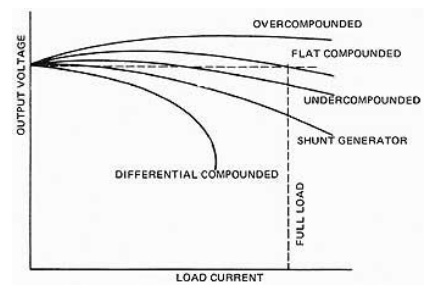 (i)   If series winding turns are so adjusted that with the increase in load current the terminal voltage increases, it is called over-compounded generator. In such a case, as the load current increases, the series field m.m.f. increases and tends to increase the flux and hence the generated voltage. The increase in generated voltage is greater than the IaRa drop so that instead of decreasing, the terminal voltage increases as shown by curve A in Fig.

(ii)  If series winding turns are so adjusted that with the increase in load current, the terminal voltage substantially remains constant, it is called flat-compounded generator. The series winding of such a machine has lesser number of turns than the one in over-compounded machine and, therefore, does not increase the flux as much for a given load current. Consequently, the full-load voltage is nearly equal to the no-load voltage as indicated by curve B in Fig

(iii) If series field winding has lesser number of turns than for a flat compounded machine, the terminal voltage falls with increase in load current as indicated by curve C m Fig. Such a machine is called under-compounded generator.