Its operation is based on the principle that when a current carrying conductor is placed in a magnetic field, the conductor experiences a mechanical force. The direction of the force is given by Fleming’s left hand rule.

A machine that converts dc power into mechanical energy is known as dc motor. Its operation is based on the principle that when a current carrying conductor is placed in a magnetic field, the conductor experiences a mechanical force. The direction of the force is given by

There are different kinds of D.C. motors, but they all work on the same principles.When a permanent magnet is positioned around a loop of wire that is hooked up to a D.C. power source, we have the basics of a D.C. motor. In order to make the loop of wire spin, we have to connect a battery or DC power supply between its ends, and support it so it can spin about its axis. To allow the rotor to turn without twisting the wires, the ends of the wire loop are connected to a set of contacts called the commutator, which rubs against a set of conductors called the brushes. The brushes make electrical contact with the commutator as it spins, and are connected to the positive and negative leads of the power source, allowing electricity to flow through the loop. The electricity flowing through the loop creates a magnetic field that interacts with the magnetic field of the permanent magnet to make the loop spin.

It is based on the principle that when a current-carrying conductor is placed in a magnetic field, it experiences a mechanical force whose direction is given by Fleming's Left-hand rule and whose magnitude is given by

Where B is the magnetic field in weber/m2. I is the current in amperes and

l is the length of the coil in meter.

The force, current and the magnetic field are all in different directions. 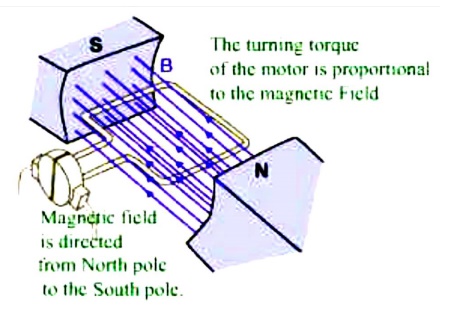 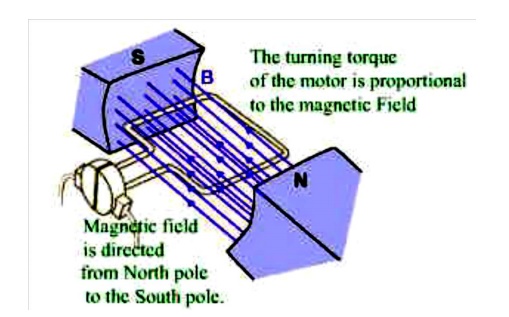 BACK OR COUNTER EMF

When the armature of a d.c. motor rotates under the influence of the driving torque, the armature conductors move through the magnetic field and hence an e.m.f. is induced in them. The induced e.m.f. acts in opposite direction to the applied voltage V(Lenz’s law) and is known as back orcounter e.m.f. Eb.

SIGNIFICANCE OF BACK E.M.F