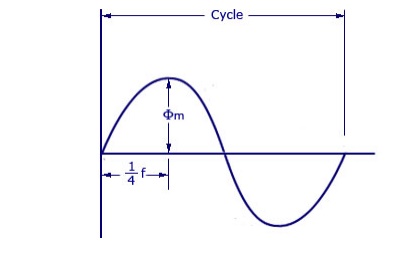 NA = Number of turns in primary

NB = Number of turns in secondary

As shown in figure above, the core flux increases from its zero value to maximum value Ømax in one quarter of the cycle , that is in ¼ frequency second.

If flux Ø varies sinusoidally, then r.m.s value of induced e.m.f is obtained by multiplying the average value with form factor.

Similarly, r.m.s value of induced e.m.f in secondary is

In an ideal transformer on no load, VA = EA  and VB = EB  , where VB is the terminal voltage

The ratio of secondary voltage to primary voltage is known as the voltage transformation ratio and is designated by letter K. i.e.

The ratio of secondary current to primary current is known as current ratio and is reciprocal of voltage transformation ratio in an ideal transformer.

Transformer on No Load.

winding, which will create alternating flux Ø. No-load current I0, also known as excitation or exciting current, has two components the magnetizing component Im and the energy component Ie. Im is used to create the flux in the core and Ie is used to overcome the hysteresis and eddy current losses occurring in the core in addition to small amount of copper losses occurring in the primary only (no copper loss occurs in the secondary, because it carries no current, being open circuited.)

From vector diagram shown in above it is obvious that

1. Induced emfs in primary and secondary windings, E1 and E2 lag the main flux Ø by and are in phase with each other.

2. Applied voltage to primary V1 and leads the main flux Ø by and is in phase opposition to E1.

3.  Secondary voltage V2 is in phase and equal to E2 since there is no voltage drop in secondary.

5. Ie is in phase with the applied voltage V1.

The transformer is said to be loaded, when its secondary circuit is completed through an impedance or load. The magnitude and phase of secondary current (i.e. current flowing through secondary) I2 with respect to secondary terminals depends upon the characteristic of the load i.e. current I2 will be in phase, lag behind and lead the terminal voltage V+2+ respectively when the load is non-inductive, inductive and capacitive. The net flux passing through the core remains almost constant from no-load to full load irrespective of load conditions and so core losses remain almost constant from no-load to full load. Vector diagram for an ideal transformer supplying inductive load is shown 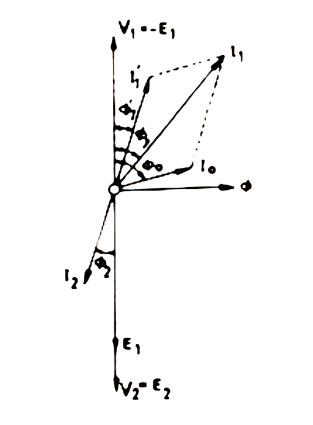 The self induced emf divided by the primary current gives the reactance of primary and is denoted by X1.

Equivalent resistance, = X2 + K2X1 Where K is the transformation ratio.

Let us consider the transformation ratio be,

The equivalent circuit for that equation can be drawn as below,

From the vector diagram above, it is found that the total primary current I1 has two components, one is no - load component Io and the other is load component I2′. As this primary current has two a component or branches, so there must be a parallel path with primary winding of transformer. This parallel path of current is known as excitation branch of equivalent circuit of transformer. The resistive and reactive branches of the excitation circuit can be represented as 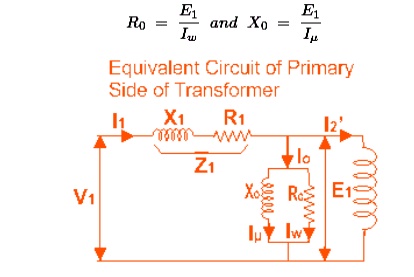 The load component I2′ flows through the primary winding of transformer and induced   voltage  across the winding is E1 as shown in the figure right. This induced voltage E1transforms to secondary and it is E2 and load component of primary current  I2′ is transformed to secondary as secondary  current I2. Current of secondary is I 2. So the voltage E2 across secondary winding is partly dropped by I2Z2 or I2R2 + j.I2X2 before it appears across load. The load voltage  is V2. 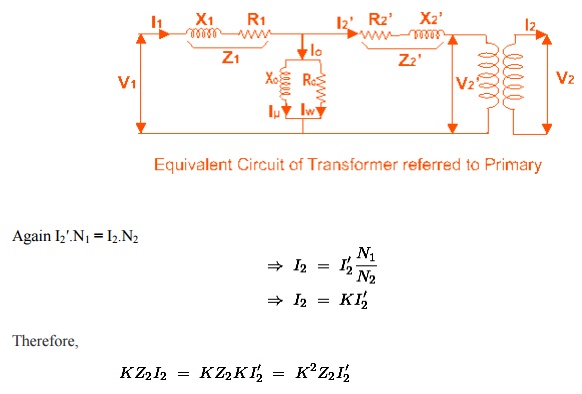 From above equation, secondary impedance of transformer referred to primary is,

So, the complete equivalent circuit of transformer referred to primary is shown in the figure below,

Since Io is very small compared to I1, it is less than 5% of full load primary current, Iochanges the voltage drop insignificantly. Hence, it is good approximation to ignore the excitation circuit in approximate equivalent circuit of transformer. The winding resistanceand reactance being in series can now be combined into equivalent resistance and reactance of transformer, referred to any particular side. In this case it is side 1 or primary side. 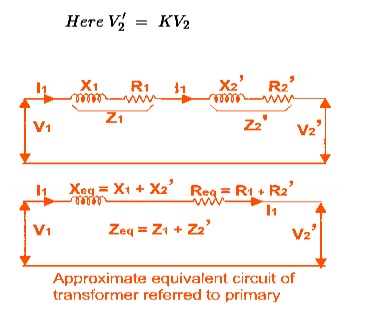 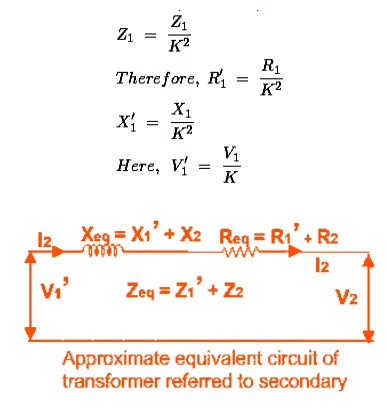 Explanation of Voltage Regulation of Transformer

Expression of Voltage Regulation of Transformer, represented in percentage, is