A conjugated diene consists of two alkene units separated by a single bond.

A conjugated diene consists of two alkene units separated by a single bond.

The ‘single’ bond connecting the two alkene units of a conjugated diene has partial double-bond character. There are two possible explanations. Firstly, the use of sp2 hybridized orbitals to form the σ bond results in a shorter bond. Secondly, the π systems of the two alkene units can overlap to give partial double-bond character.

Electrophilic addition to a diene produces a mixture of two products arising from 1,2-addition and 1,4-addition. The reaction proceeds through an allylic carbocation which is stabilized by delocalization and which accounts for the two possible products obtained.

Heating a conjugated diene with an electron-deficient alkene results in the formation of a cyclohexene ring. The mechanism is concerted and involves no intermediates.

A conjugated diene does not behave like two isolated alkenes. For example, the length of the ‘single’ bond connecting the two alkene units is slightly shorter than one would expect for a typical single bond (1.48 Å vs. 1.54 Å). This demonstrates that there is a certain amount of double-bond character present in this bond. Two explanations can be used to account for this. First of all, the bond in question links twosp2 hybridized carbons rather than two sp3 hybridized carbons. 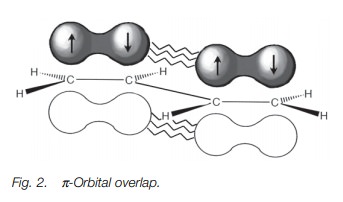 Therefore, ansp2hybridized orbital from each carbon is used for the single bond. Since thishybridized orbital has more s-character than an sp3 hybridized orbital, the bond is expected to be shorter. An alternative explanation is that the π orbitals of the two alkene systems can overlap to produce the partial double-bond character (Fig. 2).

The mechanism of 1,4-addition starts off in the same way as a normal elec- trophilic  addition.  We  shall  consider  the  reaction  of  a  conjugated  diene  with hydrogen bromide as an example (Fig. 4). One of the alkene units of the diene uses its π electrons to form a bond to the electrophilic hydrogen of HBr. The H–Br bond breaks at the same time to produce a bromide ion. The intermediate carbocation produced has a double bond next to the carbocation center and is called an allylic carbocation.

This system is now set up for resonance involving the remaining alkene and the carbocation center, resulting in delocalization of the positive charge between positions 2 and 4.

Due to this delocalization, the carbo-cation is stabilized and this in turn explains two features of this reaction. First of all, the formation of two different products is now possible since the second stage of the mechanism involves the bromide anion attacking either at position 2 or at position 4 (Fig. 5). Secondly, it explains why the alternative 1,2-addition product is not formed (Fig. 6). The intermediate carbocation required for this 1,2-addition cannot be stabilized by resonance. Therefore, the reaction proceeds through the allylic carbocation instead. 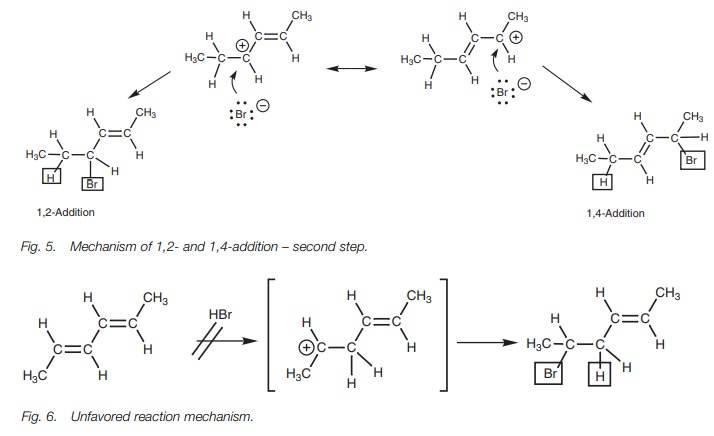 The Diels–Alder cycloaddition reaction is an important method by which six- membered rings can be synthesized. The reaction involves a conjugated diene and an alkene (Fig. 7). The alkene is referred to as a dienophile (diene-lover) and usually has an electron-withdrawing group linked to it (e.g. a carbonyl group or a nitrile). The mechanism is concerted with new bonds being formed at the same time as old bonds are being broken (Fig. 8). No intermediates are involved. 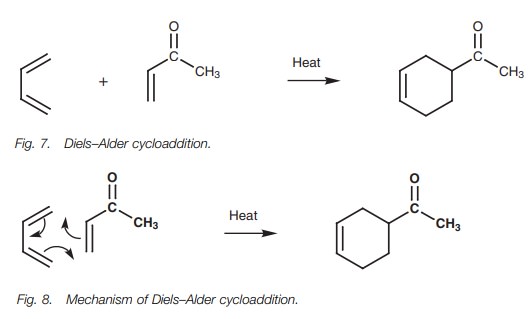