Alkynes are reduced to alkanes with hydrogen gas over a platinum catalyst.

Alkynes are reduced to alkanes with hydrogen gas over a platinum catalyst. Two molecules of hydrogen are added and the reaction goes through an alkene intermediate. The reaction can be stopped at the alkene stage if a less active or ‘poisoned’ catalyst is used. The stereochemistry of the alkene from such a reaction is Z since both hydrogen atoms are added to the same side of the alkyne.

Alkynes can also be reduced to E-alkenes using sodium or lithium in liquid ammonia.

Alkynes react with hydrogen gas in the presence of a metal catalyst in a process known as hydrogenation – an example of a reduction reaction. With a fully active catalyst such as platinum metal, two molecules of hydrogen are added to produce an alkane (Fig. 1).

The reaction involves the addition of one molecule of hydrogen to form an alkene intermediate which then reacts with a second molecule of hydrogen to form the alkane. With less active catalysts, it is possible to stop the reaction at the alkene stage. In particular, Z-alkenes can be synthesized from alkynes by reaction with hydrogen gas and Lindlar’s catalyst (Fig. 2). This catalyst consists of metallic palladium deposited on calcium carbonate which is then treated with lead acetate and quinoline. The latter treatment ‘poisons’ the catalyst such that the alkyne reacts with hydrogen to give an alkene, but does not react further. Since the start-ing materials are absorbed onto the catalytic surface, both hydrogens are added to the same side of the molecule to produce the Z isomer. 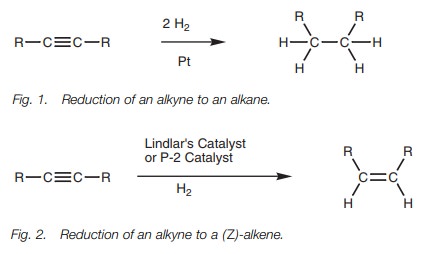 An alternative catalyst which achieves the same result is nickel boride (Ni2B) – the P-2 catalyst.

Reduction of an alkyne to an E-alkene can be achieved if the alkyne is treated with lithium or sodium metal in ammonia at low temperatures (Fig. 3). This is known as a dissolving metal reduction.

In this reaction, the alkali metal donates its valence electron to the alkyne to produce a radical anion (Fig. 4). This in turn removes a proton from ammonia to produce a vinylic radical which receives an electron from a second alkali metal to produce a trans-vinylic anion. This anion then removes a proton from a second molecule of ammonia and produces the trans- or E-alkene. Note that half curly arrows are used in the mechanism since this is a radical reaction involving the movement of single electrons.