Properties of alkenes and alkynes

Alkenes are planar with bond angles of 120 .

PROPERTIES OF ALKENES AND ALKYNES

The C=C bond is stronger and shorter than a C–C single bond. However, the two bonds making up the C=C bond are not of equal strength. The π bond is weaker than the σ bond. Bond rotation round a C=C bond is not possible and isomers are possible depending on the substituents present. The more substituents which are present on an alkene, the more stable the alkene is.

An alkyne triple bond is stronger than a C–C single bond or a C=C double bond. The two π bonds present in the triple bond are weaker and more reac-tive than the σ bond.

Alkenes and alkynes are nonpolar compounds which dissolve in nonpolar sol-vents and are very poorly soluble in water. They have low boiling points since only weak van der Waals interactions are possible between the molecules.

Alkenes and alkynes act as nucleophiles and react with electrophiles by a reaction known as electrophilic addition. The nucleophilic centers are the multiple bonds which are areas of high electron density.

Alkenes show characteristic C=C stretching absorptions in their IR spectra. Absorptions due to C-H stretching and bending may also be identifiable. The latter can give an indication of the substitution pattern. The nmr signals for alkene protons and carbons occur in characteristic regions of the rele-vant nmr spectra. Chemical shifts, coupling patterns and coupling con-stants can be used to identify the stereochemistry of the alkene.

The alkene functional group (R2CCR2) is planar in shape with bond angles of 120°. The two carbon atoms involved in the double bond are both sp2 hybridized.

Each carbon has three sp2 hybridized orbitals which are used for σ bonds while the p orbital is used for aπbond. Thus, the double bond is made up of oneσbond and one π bond (Fig. 1). 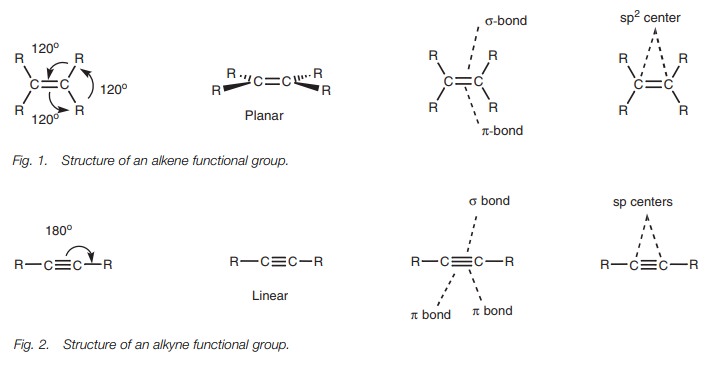 The alkyne functional group consists of a carbon carbon triple bond and is linear in shape with bond angles of 180°(Fig. 2).

Bond rotation is not possible for a C = C double bond since this would require the π bond to be broken. Therefore, isomers of alkenes are possible depending on the relative position of the substituents. These can be defined as cis or trans, but are more properly defined as (Z) or (E).

The bond length of a carbon carbon triple bond is 1.20 Å and the bond strength is 200 kcal mol  1. The π bonds are weaker than the σ bond. The presence of the π bonds explains why alkynes are more reactive than alkanes.

Alkenes  and  alkynes  have  physical  properties  similar  to  alkanes.  They  arerelatively nonpolar, dissolve in nonpolar solvents and are not very soluble in water. Only weak van der Waals interactions are possible between unsaturated molecules such as alkene and alkynes, and so these structures have low boiling points compared to other functional groups.

Alkenes and alkynes are nucleophilic and commonly react with electrophiles in a reaction known as electrophilic addition. The nucleophilic center of the alkene or alkyne is the double bond or triple bond (Fig. 3). These are areas of high electron density due to the bonding electrons. The specific electrons which are used toform bonds to attacking electrophiles are those involved in π bonding.

The IR spectrum of an alkene shows a characteristic stretching absorption for the C=C  bond  at  1680–1620 cm−1.  This  is  slightly  higher  than  the  corresponding absorptions for aromatic rings. However, conjugation with aromatic rings, carbonyl groups or other double bonds can lower the absorption frequencyas far as 1590 cm−1. Some carbonyl absorptions can occur in the same region butare generally stronger if they are present.

The nmr signals for the protons and carbons of an alkene group appear at char- acteristic positions in their respective spectra (typically 4.5–6.5 ppm for 1H spectra and 80–145 ppm for 13C spectra). The chemical shifts of each signal can indicate the stereochemistry of the alkene, and nmr tables are available to work out the theoretical shifts based on the substituents present and their relative positions. If coupling is observed between the alkene protons in the proton spectrum, the cou- pling pattern and the coupling constants can indicate the stereochemistry. For example, the coupling constants for protons which are trans or cis with respect to each other are typically 14–16 Hz and 6–8 Hz respectively. The coupling constants for geminal protons (i.e. protons on the same alkene carbon) are small (typically 1–2 Hz).

In the uv spectrum of ethene, the λmax for the π−π* transition is 171 nm. For con- jugated systems the wavelength of this transition increases and can indicate the amount of conjugation as well as the substitution pattern.

The IR spectrum of an alkyne shows a characteristic triple bond absorption in the region 2260–2100 cm−1. This can often be weak and if the alkyne is symmetrical no absorption will be seen at all. Although the absorption may be weak, it can usually  be  identified  since  the  relevant  region  is  normally  devoid  of  peaks.

The proton of a terminal alkyne typically gives a signal at 1.8–3.1 ppm in the 1H nmr, while the carbons of any alkyne appear in the region 70–95 ppm in the 13C nmr.