Stabilization: Carbocations are stabilized by induction, hyperconjugation, or delocalization.

Carbocations   are   stabilized   by   induction,   hyperconjugation,   or delocalization.

Alkyl groups have an electron-donating effect on any neighboring positive charge. The more alkyl groups attached, the greater the stabilizing effect.

In hyperconjugation, the vacant 2p orbital of the carbocation can interact with the σ orbitals of neighboring C–H bonds. As a result, the σ electrons ofthe C–H bond can spend a small amount of time entering the space occu-pied by the 2p orbital such that the latter orbital is not completely empty.

This interaction serves to spread or delocalize the positive charge to neigh- boring σ  bonds and thus stabilize it. The more substituents present, the more chances there are for hyperconjugation.

Positively charged species such as carbocations are inherently reactive and unstable. The more unstable they are, the less easily they are formed and the less likely the overall reaction. Any factor which helps to stabilize the positive charge (and by inference the carbocation) will make the reaction more likely. There are three ways in which a positive charge can be stabilized: inductive effects, hyperconjugation, and delocalization. We have already seen the effects of delocalization in stabilizing the bromonium ion. We will now look at the effects of induction and hyperconjugation.

Alkyl groups can donate electrons towards a neighboring positive center and this helps to stabilize the ion since some of the positive charge is partially dispersed over the alkyl group (Fig. 1). The more alkyl groups which are attached, the greater the electron donating power and the more stable the carbocation.

Both carbons of an alkene are sp2 hybridized. However, this is altered on formation of the carbocation (Fig. 2). When an alkene reacts with an electrophile such as a proton, both electrons in the π bond are used to form a new σ bond to the electrophile. As a result, the carbon which gains the electrophile becomes ansp3center.

The other carbon containing the positive charge remains as an sp2center. This means that it has three sp2 hybridized orbitals (used for the three bonds still present) and one vacant 2p orbital which is not involved in bonding. Hyperconjugation involves the overlap of the vacant 2p orbital with a neighboring C–H σ-bond orbital (Fig. 3). 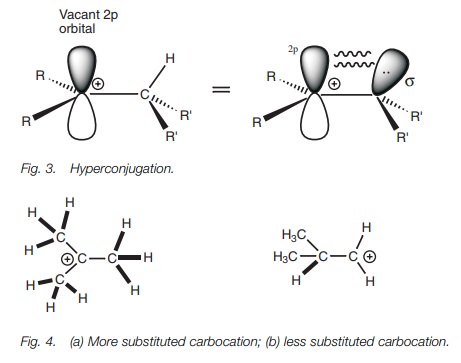