Symmetrical alkynes undergo electrophilic addition with halogens or hydrogen halides by the same mechanism described for alkenes. The reaction can go once or twice depending on the amount of reagent used. Alkynes are less reactive than alkenes since the intermediate formed (a vinylic carbocation) is more unstable than the corresponding carbocation formed from electrophilic addition to an alkene. Reaction of an alkyne with aqueous acid and mercuric acid produces an intermediate enol which rearranges by keto–enol tautomerism to give a ketone.

Addition of hydrogen halide to a terminal alkyne results in the hydrogen(s) adding to the terminal carbon and the halogen(s) adding to the more sub-stituted carbon. This is another example of Markovnikov’s rule. Similarly, reaction of a terminal alkyne with aqueous acid and mercuric sulfate leads to a ketone rather than an aldehyde following addition of one molecule of water followed by a keto–enol tautomerism.

Alkynes undergo electrophilic addition reactions with the same reagents as alkenes (e.g. halogens and hydrogen halides). Since there are two π bonds in alkynes, it is possible for the reaction to go once or twice depending on the amount of reagent added. For example, reaction of 2-butyne with one equivalent of bromine gives an (E)-dibromoalkene (Fig. 1a). With two equivalents of bromine, the initially formed (E)-dibromoalkene reacts further to give a tetrabromoalkane (Fig. 1b).

Treatment of an alkyne with one equivalent of HBr gives a bromoalkene (Fig. 2a). If two equivalents of hydrogen bromide are present the reaction can go twice to give a geminal dibromoalkane where both bromine atoms are added to the same carbon (Fig. 2b).

The above addition reactions are similar to the addition reactions of alkenes. However, the reaction is much slower for an alkyne, since alkynes are less reactive. One might expect alkynes to be more nucleophilic, since they are more electron rich in the vicinity of the multiple bond, that is, six electrons in a triple bond as compared to four in a double bond. However, electrophilic addition to an alkyne involves the formation of a vinylic carbocation (Fig. 3). This carbocation is much less stable than the carbocation intermediate resulting from electrophilic addition to an alkene.

Due to this low reactivity, alkynes react slowly with aqueous acid, and mercuric sulfate has to be added as a catalyst. The product which might be expected from this reaction would be a diol (Fig. 4).

In fact, a diol is not formed. The intermediate (an enol) undergoes acid-catalyzed rearrangement to give a ketone instead (Fig. 5). This process is known as a keto–enol tautomerism. 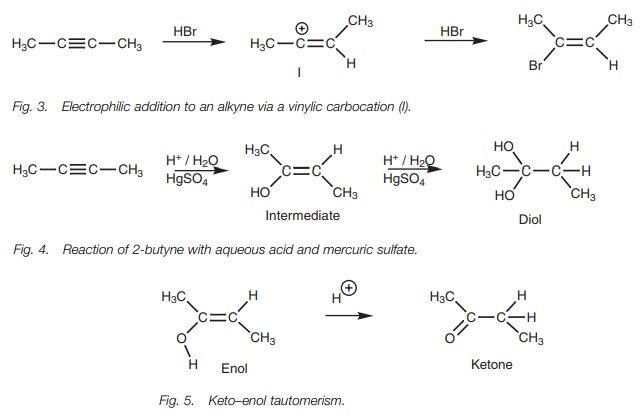 Tautomerism is the term used to describe the rapid interconversion of two dif-ferent isomeric forms (tautomers) – in this case the keto and enol tautomers of a ketone. The keto tautomer is by far the dominant species for a ketone and the enol tautomer is usually present in only very small amounts (typically 0.0001%). There-fore, as soon as the enol is formed in the above reaction, it rapidly tautomerizes to the keto form and further electrophilic addition does not take place.

If a terminal alkyne is treated with an excess of hydrogen halide the halogens both end up on the more substituted carbon (Fig. 6).

This is another example of Markovnikov’s rule which states that the additional hydrogens end up on the carbon which already has the most hydrogens. The same rule applies for the reaction with acid and mercuric sulfate, which means that a ketone is formed after keto–enol tautomerism instead of an aldehyde (Fig. 7).