Alkenes readily undergo electrophilic addition reactions. The π bond is involved in the reaction and new substituents are added to either end of the original alkene.

Alkenes readily undergo electrophilic addition reactions. The π  bond is involved in the reaction and new substituents are added to either end of the original alkene.

Treating an alkene with a hydrogen halide results in the formation of an alkyl halide. The proton from the hydrogen halide adds to one end of the double bond and the halogen atom to the other. The mechanism of elec-trophilic addition is a two stage process which goes through a carbocation intermediate. In the first stage, the alkene acts as a nucleophile and the hydrogen halide acts as an electrophile. In the second stage of the mecha-nism, the halide ion acts as a nucleophile and the carbocation intermediate is an electrophile.

Alkenes react with bromine or chlorine to produce vicinal dihalides with the halogen atoms adding to each end of the double bond. The reaction is useful in the protection or purification of alkenes or as a means of synthe-sizing alkynes. The halogen molecule is polarized as it approaches the alkene double bond thus generating the required electrophilic center. The intermediate formed is called a bromonium ion intermediate in the case of bromine and is stabilized since it is possible to share or delocalize the posi-tive charge between three atoms. If the reaction is carried out in water, water can act as a nucleophile and intercept the reaction intermediate to form a halohydrin where a halogen atom is added to one end of the double bond and a hydroxyl group is added to the other.

Alkenes can be converted to alcohols by treatment with aqueous acid (e.g. sulfuric acid). Milder conditions can be used if mercuric acetate is used to produce an organomercury intermediate which is reduced with sodium borohydride.

A similar reaction to the mercuric acetate/sodium borohydride synthesis of alcohols allows the conversion of alkenes to ethers. In this case, mercuric trifluoracetate is used.

Alkenes can be reacted with aromatic rings to give arylalkanes. The reaction is known as a Friedel–Crafts alkylation of the aromatic ring but can also be viewed as another example of an electrophilic addition to an alkene.

Many of the reactions which alkenes undergo take place by a mechanism known as electrophilic addition (Fig. 1). In these reactions, theπbond of the double bond has been used to form a bond to an incoming electrophile and is no longer present in the product. Furthermore, a new substituent has been added to each of the carbon atoms.

In this section we shall look at the electrophilic addition of symmetrical alkenes.

Alkenes react with hydrogen halides (HCl, HBr, and HI) to give an alkyl halide.

The hydrogen halide molecule is split and the hydrogen atom adds to one end of the double bond while the halogen atom adds to the other. The reaction of HBr with 2,3-dimethyl-2-butene is an example of this reaction (Fig. 3). In this reaction, the alkene acts as a nucleophile. It has an electron-rich double bond containing four electrons, two of which make up a strong σ bond and two of which make up a weaker π bond.

In the first step of electrophilic addition (Fig. 4), the alkene acts as a nucleophile and uses its two π electrons to form a new bond to the hydrogen of HBr. As this new bond is formed, the H–Br bond breaks since hydrogen is only allowed one bond. Both electrons in that bond end up on the bromine atom to produce a bro-mide ion. Since the electrons from the π bond have been used for the formation of a new σ bond, the π bond is no longer present. As a result, the ‘left hand’ carbon has been left with only three bonds and becomes positively charged. This is known as a carbocation since the positive charge is on a carbon atom. 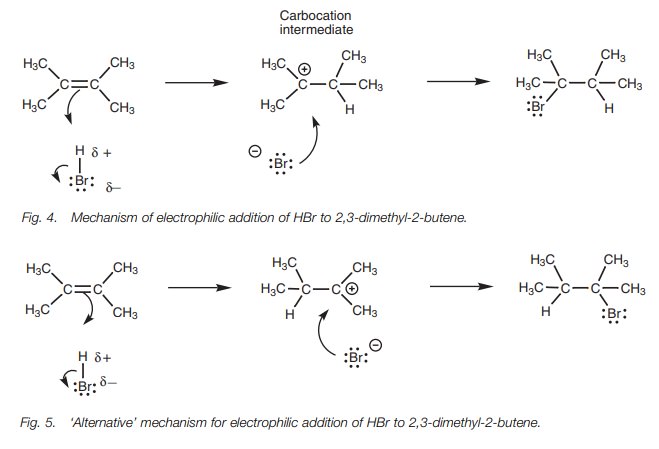 With a symmetrical alkene, the product is the same and so it does not matter which end of the double bond is used for the new bond to hydrogen. The chances are equal of the hydrogen adding to one side or the other.

The electrophilic additions of H–Cl and H–I follow the same mechanism to pro-duce alkyl chlorides and alkyl iodides respectively.

The reaction of an alkene with a halogen such as bromine or chlorine results in the formation of a vicinal dihalide. The halogen molecule is split and the halogens are added to each end of the double bond (Fig. 6). Vicinal dibromides are useful in the purification or protection of alkenes since the bromine atoms can be removed under different reaction conditions to restore the alkene. Vicinal dibromides can also be converted to alkynes. 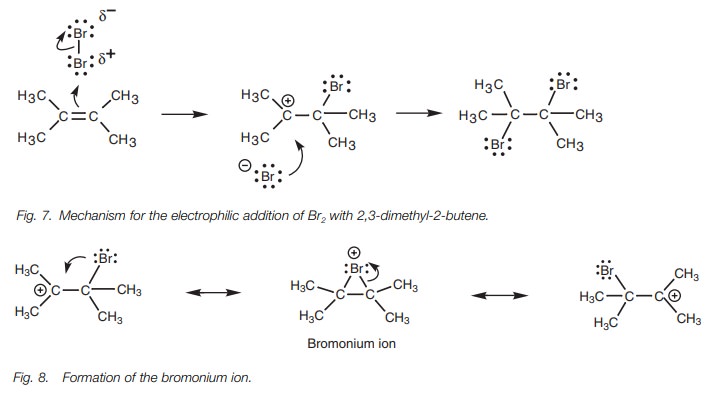 There is more to this mechanism than meets the eye. The carbocation interme-diate can be stabilized by neighboring alkyl groups through inductive and hyper-conjugation effects. However, it can also be stabilized by sharing the positive charge with the bromine atom and a second carbon atom (Fig. 8).

The positively charged carbon is an electrophilic center. The bromine is a weak nucleophilic center. A neutral halogen does not normally act as a nucleophile, but in this case the halogen is held close to the carbocation making reaction more likely.

Evidence for the existence of the bromonium ion is provided from the observation that bromine adds to cyclic alkenes (e.g. cyclopentene) in an anti-stereochemistry (Fig. 9). In other words, each bromine adds to opposite faces of the alkene to pro-duce only the trans isomer. None of the cis isomer is formed. If the intermediate was a carbocation, a mixture of cis and trans isomers would be expected since the second bromine could add from either side. With a bromonium ion, the second bromine must approach from the opposite side. 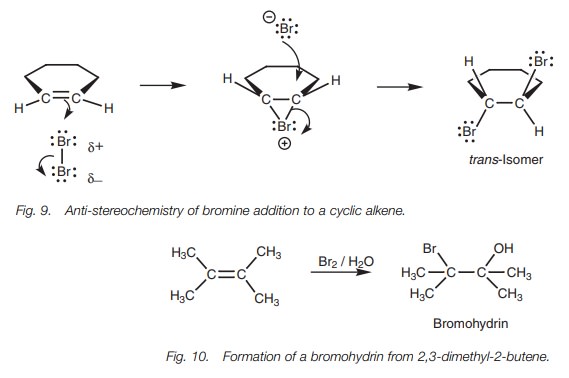 The reaction of an alkene with a halogen such as bromine and chlorine normally gives a vicinal dihalide. However, if the reaction is carried out in water as solvent, the product obtained is a halohydrin where the halogen adds to one end of the double bond and a hydroxyl group from water adds to the other (Fig. 10).

Water uses a lone pair of electrons on oxygen to form a bond to the carbocation. As a result, the oxygen effectively ‘loses’ an electron and gains a positive charge. This charge is lost and the oxygen regains its second lone pair when one of the O–H bonds breaks and both electrons move onto the oxygen.

Alkenes can be converted to alcohols by treatment with aqueous acid (sulfuric orphosphoric acid; Fig. 12). This electrophilic addition reaction involves the additionof  water  across  the  double  bond.  The  hydrogen  adds  to  one  carbon  while  ahydroxyl group adds to the other carbon.

Sometimes the reaction conditions used in this reaction are too harsh since heat- ing is involved and rearrangement reactions can take place. A milder method which gives better results is to treat the alkene with mercuric acetate [Hg(OAc)2] then sodium borohydride (Fig. 13). The reaction involves electrophilic addition of the mercury reagent to form an intermediate mercuronium ion. This reacts with water to give an organomercury intermediate. Reduction with sodium borohy- dride replaces the mercury substituent with hydrogen and gives the final product (Fig. 13)

Alkenes can also be converted to alcohols by hydroboration.

A similar reaction to the mercuric acetate/sodium borohydride synthesis of alcohols allows the conversion of alkenes to ethers. In this case, mercuric trifluoracetate is used (Fig. 14).

The reaction of an aromatic ring such as benzene with an alkene under acid conditions results in the formation of an arylalkane (Fig. 15). As far as the alkene is concerned this is another example of electrophilic addition involving the addi-tion of a proton to one end of the double bond and the addition of the aromatic ring to the other.

As far as the aromatic ring is concerned this is an example of an electrophilic substitution reaction called the Friedel–Crafts alkylation.