Alkenes can be converted to alcohols by treatment with diborane followed by hydrogen peroxide.

The mechanism involves an initial π complex between the alkene and BH3. A four-centered transition state is then formed where the π  bond of the alkene and one of the B–H bonds is partially broken and the bonds linking H and B to the alkene are partially formed. There is an imbalance of charge in the transition state, resulting in one of the carbon atoms being slightly positive. The reaction proceeds such that the most substituted carbon bears the partial charge and this results in the boron adding to the least substi- tuted carbon. Oxidation with hydrogen peroxide involves a hydroperoxide molecule bonding to boron, followed by migration of an alkyl group from boron to oxygen. This is repeated twice more to form a trialkyl borate which is hydrolyzed to give the final alcohol.

Alcohols can be generated from alkenes by reaction with diborane (B2H6 or BH3), followed  by  treatment  with  hydrogen  peroxide  (Fig. 1).  The  first  part  of  the reaction involves the splitting of a B–H bond in BH3 with the hydrogen joining one end of the alkene and the boron joining the other. Each of the B–H bonds is split in this way such that each BH3  molecule reacts with three alkenes to give an organoborane intermediate where boron is linked to three alkyl groups. This can then be oxidized with alkaline hydrogen peroxide to produce the alcohol. With unsymmetrical alkenes, the least substituted alcohol is obtained (anti- Markovnikov; Fig. 2) and so the organoborane reaction is complementary to the electrophilic addition reaction with aqueous acid. Steric factors appear to play a role in controlling this preference with the boron atom preferring to approach the least sterically hindered site. Electronic factors also play a role as described in the mechanism below.

The mechanism (Fig. 3) involves the alkene π bond interacting with the empty p orbital of boron to form a π complex. One of BH3’s hydrogen atoms is then transferred to one end of the alkene as boron itself forms aσ bond to the other end. This takes place through a four-centered transition state where the alkene’s π bond and the B–H bond are partially broken, and the eventual C–H and C–B bonds are partially formed. There is an imbalance of electrons in the transition state which results in the boron being slightly negative and one of the alkene carbons being slightly positive. The carbon best able to handle this will be the most substituted carbon and so the boron will end up on the least substituted carbon. (Note that boron has six valence electrons and is electrophilic. Therefore, the addition of boron to the least substituted position actually follows Markovnikov’s rule.) Since subsequent oxidation with hydrogen peroxide replaces the boron with a hydroxyl group, the eventual alcohol will be on the least substituted carbon. Fur-thermore, the addition of the boron and hydrogen atoms take place such that they are on the same side of the alkene. This is called syn-addition. 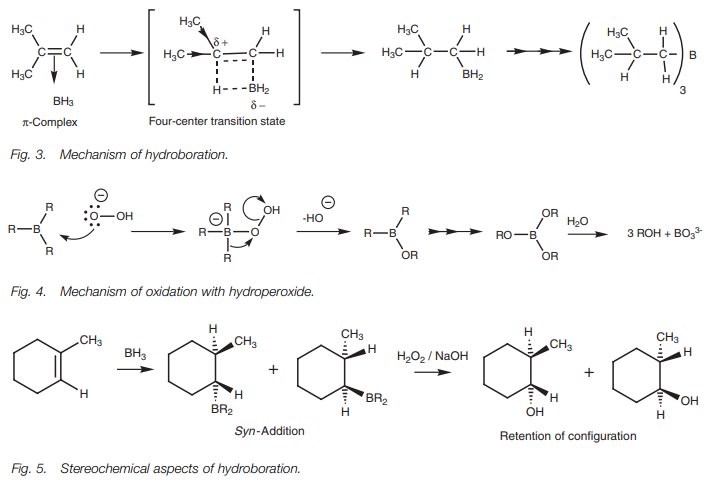 The mechanism of oxidation (Fig. 4) involves addition of the hydroperoxide to the electron deficient boron to form an unstable intermediate which then rearranges such that an alkyl group migrates from the boron atom to the neighboring oxygen and expels a hydroxide ion. This process is then repeated for the remaining two hydrogens on boron and the final trialkyl borate B(OR)3 can then be hydrolyzed with water to give three molecules of alcohol plus a borate ion.