Chemical properties of aldehydes and ketones

Chemical properties of aldehydes and ketones

This reaction is the most common reactions of aldehydes and ketones. The carbonyl carbon carries a small degree of positive charge. Nucleophile such as CN− can attack the carbonyl carbon and uses its lone pair to form a new carbon – nucleophile ' σ' bond, at the same time two electrons from the carbon – oxygen double bond move to the most electronegative oxygen atom. This results in the formation of an alkoxide ion. In this process, the hybridisation of carbon changes from sp2 to sp3 .

The tetrahedral intermediate can be protonated by water or an acid to form an alcohol.

In general, aldehydes are more reactive than ketones towards nucleophilic addition reactions due to +I and steric effect of alkyl groups.

This reaction finds application in the separation and purification of carbonyl compound. The bisulphate addition compound is water soluble and the solution is treated with mineral acid to regenerate the carbonyl compounds .

When aldehydes / ketones is treated with 2 equivalents of an alcohol in the presence of an acid catalyst to form acetals.

When acetaldehyde is treated with 2 equivalent of methanol in presence of HCl, 1,1, - dimethoxy ethane is obtained. 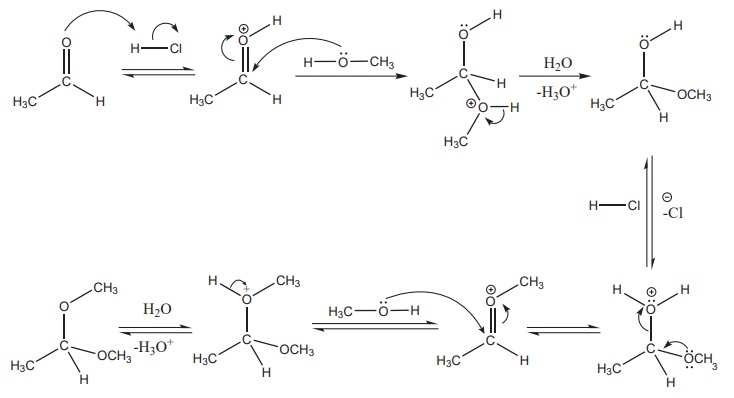 4) Addition of ammonia and its derivatives

When the nucleophiles, such as ammonia and its derivative 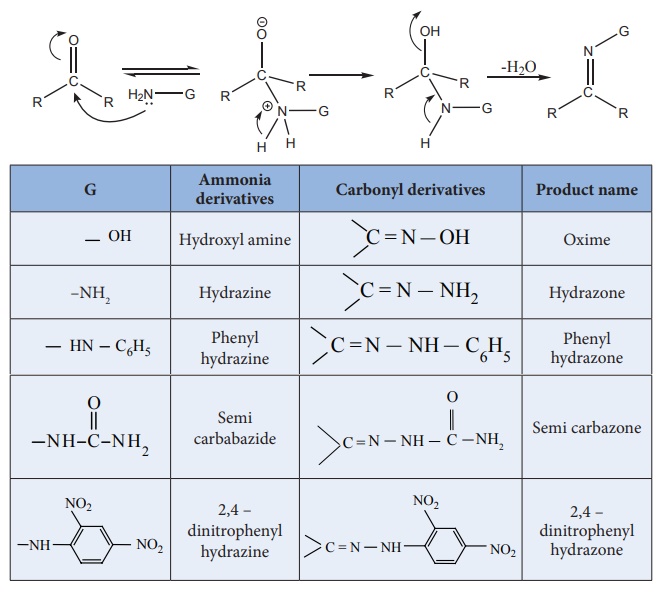 i) Reaction with hydroxyl amine

Aldehyde and ketones react with hydroxylamine to form oxime.

Aldehydes and ketones react with hydrazine to form hydrazone.

i) Aliphatic aldehydes (except formaldehyde) react with an ethereal solution of ammonia to form aldimines.

ii) Formaldehyde reacts with ammonia to form hexa methylene tetramine, which is also known as Urotropine. 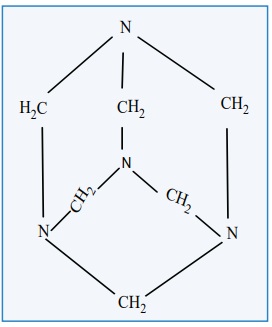 (i) Urotropine is used as a medicine to treat urinary infection.

B) Oxidation of aldehydes and ketones

a) Oxidation of aldehydes

Aldehydes are easily oxidised to carboxylic acid containing the same number of carbon atom, as in parent aldehyde. The common oxidising agents are acidified K2Cr2O7, acidic or alkaline KMnO4 or chromic oxide.

b) Oxidation of ketone

Ketones are not easily oxidised. Under drastic condition or with powerful oxidising agent like Con.HNO3, H+/KMnO4, H+/K2Cr2O7, cleavage of carbon-carbon bond takes place to give a mixture of carboxylic acids having less number of carbon atom than the parent ketone.

(i) Reduction to alcohols

We have already learnt that aldehydes and ketones can be easily reduced to primary and secondary alcohols respectively. The most commonly used reducing agents are Lithium Aluminium hydride (LiAlH4), and Sodium borohydride (NaBH4).

a) Aldehyde are reduced to primary alcohols.

b) Ketone are reduced to Secondary alcohols.

The above reactions can also be carried out with hydrogen in the presence of metal catalyst like Pt, Pd, or Ni. LiAlH4 and NaBH4 do not reduce isolated carbon – carbon double bonds and double bond of benzene rings. In case of α, β unsaturated aldehyde and ketones, LiAlH4 reduces only C = O group leaving C = C bond as such.

The carbonyl group of aldehydes and ketones can be reduced to methylene group using suitable reducing agents to give hydrocarbons.

Aldehyde (or) ketones is first converted to its hydrazone which on heating with strong base gives hydrocarbons.

(iii) Reduction to pinacols: Ketones, on reduction with magnesium amalgam and water, are reduced to symmetrical diols known as pinacol.

group, when treated with halogen and alkali give the corresponding haloform. This is known as Haloform reaction.

In presence of dilute base NaOH, or KOH, two molecules of an aldehyde or ketone having α-hydrogen add together to give β- hydroxyl aldehyde (aldol) or β - hydroxyl ketone (ketol). The reaction is called aldol condensation reaction. The aldol or ketol readily loses water to give α,β – unsaturated compounds which are aldol condensation products.

The mechanism of aldol condensation of acetaldehyde takes place in three steps.

The carbanion is formed as the α - hydrogen atom is removed as a proton by the base.

The carbanion attacks the carbonyl carbon of another unionized aldehyde to form an alkoxide ion.

The alkoxide ion formed is protonated by water to form aldol.

F) Some important reactions of benzaldehyde

Benzaldehye condenses with aliphatic aldehyde or methyl ketone in the presence of dil. alkali at room temperature to form unsaturated aldehyde or ketone. This type of reaction is called Claisen – Schmidt condensation.

In the presence of concentrated aqueous or alcoholic alkali, aldehydes which do not have α - hydrogen atom undergo self oxidation and reduction (disproportionation) to give a mixture of alcohol and a salt of carboxylic acid. This reaction is called Cannizaro reaction.

This reaction is an example disproportionation reaction

Step 1 : Attack of OH- on the carbonyl carbon.

Cannizaro reaction is a characteristic of aldehyde having no α – hydrogen.

The Benzoin condensation involves the treatment of an aromatic aldehyde with aqueous alcoholic KCN. The products are a hydroxy ketone.

When an aromatic aldehyde is heated with an aliphatic acid anhydride in the presence of the sodium salt of the acid corresponding to the anhydride, condensation takes place and an α, β unsaturated acid is obtained. This reaction is known as Perkin’s reaction.

Aromatic aldehydes react with primary amines (aliphatic or aromatic) in the presence of an acid to form schiff’s base. 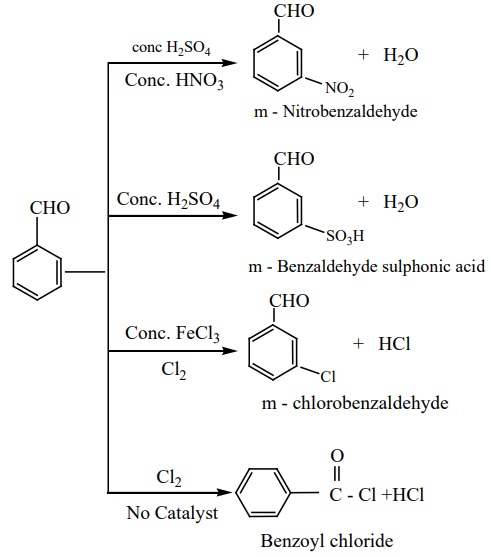