The resonance structure of carboxylate ion are given below.

The strength of carboxylic acid can be expressed in terms of the dissociation constant(Ka):

The dissociation constant is generally called acidity constant because it measures the relative strength of an acid. The stronger the acid, the higher will be its Ka value.

The dissociation constant of an acid can also be expressed in terms of pKa value.

A stronger acid will have higher Ka value but smaller pKa value.

Ka and pKa values of some Carboxylic acids of 298 K 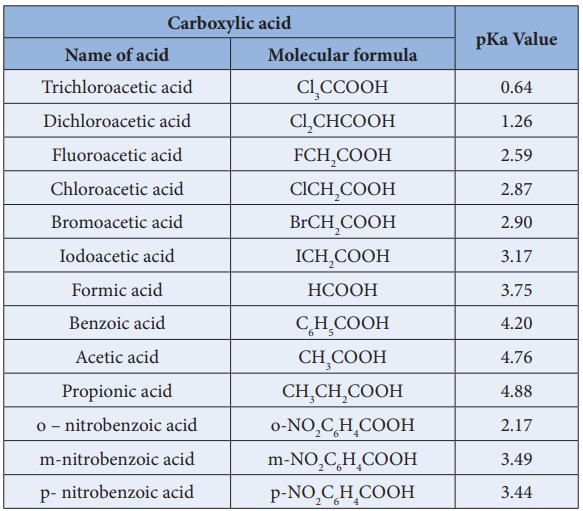 Effect of substituents on the acidity of carboxylic acid.

The electron releasing groups (+I groups) increase the negative charge on the carboxylate ion and destabilise it and hence the loss of proton becomes difficult. For example, formic acid is more stronger than acetic acid.

The electron – withdrawing substituents decrease the negative charge on the carboxylate ion and stabilize it. In such cases, the loss of proton becomes relatively easy.

Acidity increases with increasing electronegativity of the substituents. For example, the acidity of various halo acetic acids follows the order

Acidity increases with increasing number of electron – withdrawing substituents on the α- carbon. For example

The effect of various, electron withdrawing groups on the acidity of a carboxylic acid follows the order,

The relative acidities of various organic compounds are