In multicellular organisms, the growth of cells by division is under tight control Cells divide when stimulated with the requisite internal and external signals.

In multicellular organisms, the growth of cells by division is under tight control  Cells divide when stimulated with the requisite internal and external signals (Figure 17.1). This strict control of cell division ensures that division occurs at a rate appropriate to the structure of the tissue or organ. In some tissues, for example bone marrow, skin and gastrointestinal (GIT) endothelium, cells divide constantly, replacing ones that have died. However, in other tissues, such as nervous tissue, mitosis is rare and lost cells are not replaced. In yet other tissues, cells can commence dividing when required as, for example, in the regeneration of liver or during the healing of wounds in the skin. The term cancer covers a number of diseases in which the growth of cells becomes uncontrolled. Cancer cells fail to respond to the usual controling signals and their growth becomes unregulated. Indeed, the name cancer comes from a Latin word meaning ‘a crab’, and describes the manner inwhich the pattern of penetration into normal tissues by the abnormal growth bears a superficial resemblance to a crab’s claw. These abnormal cells may invade nearby tissues and may enter the blood and lymph systems and spread to remoter areas. 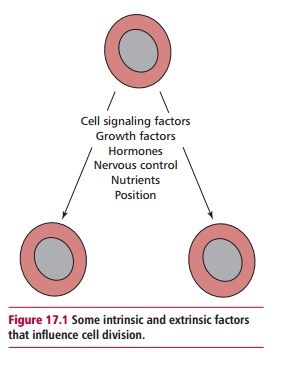 Today, the term cancer is used popularly to describe what is known as a malignant tumor. Oncology, derived from the Greek wordoncos, a lump, isthe branch of medicine involved with the study of the development of tumors, their epidemiology, diagnosis and treatment. A tumor is an abnormal mass of cells that may be benign or malignant. Benign tumors generally grow slowly and do not spread to other tissues, though they may continue to grow in situ. Such tumors are only harmful if they interfere with the normal function of a tissue, or if they cause pressure by growing within a confined space, such as in the brain. A malignant tumor is one that spreads from its initial site, where it is known as the primary tumor, through the blood and lymph to establish secondary tumors in other organs. Such movement from the primary tumorand the formation of secondary tumors is known as metastasis. A term that is often used in the context of cancer is neoplasm. This means, literally, a new tumor or new mass, but is generally used to describe a cancer.

The causes of cancer are complex and varied. Some arise from environmental agents called carcinogens, others are brought about by oncogenic, that is cancer-inducing, viruses. Most cancers arise, ultimately, from mutations in DNA. These mutations may be caused by environmental agents, or may be inherited in the germ line, making individuals more susceptible to cancer.

Cancers can arise from any tissue in the body; indeed, they have been detected in over 200 different sites. Some sites are more susceptible than others, the commonest being the lungs, breasts, prostate, GIT and skin. While most cancers occur more frequently in the old than in the young, with cancer generally being regarded as a disease of aging , certain cancers occur typically in children. In the UK it has been estimated that one in three individuals will develop a cancer at some time in their life and that cancer causes one in four deaths. Treatment of cancer represents 6% of all NHS hospital expenditure. Similar incidence rates are seen in the USA.