In England in 2002 there were 276 700 new cases of malignant cancer registered, approximately evenly divided amongst men and women.

In England in 2002 there were 276 700 new cases of malignant cancer registered, approximately evenly divided amongst men and women. However, individual cancers are often unevenly distributed between the sexes and,

clearly, some cancers occur only in men or women. Obvious examples of the latter are cancer of the cervix uteri or ‘cervical cancer’ in women and testicular and prostate cancer in men. Contrary to common belief, men can develop breast cancer, although the incidence is much lower than in women. Moreover, the incidence of breast cancer in both sexes appears to be increasing. A study in the USA showed increases in male and female breast cancer of 26% and 52% respectively between two separate studies in 1973– 1978 and 1994–1998. The commonest forms of cancer in men, women and children in the USA are shown in Table 17.1.

The annual incidence of different forms of cancer is shown in Figure 17.2. With the exception of the childhood cancers, the incidence of cancer increases with age, as shown in Figure 17.3. This increasing incidence is due to a number of factors including increased length of exposure to environmental agents associated with cancer, and an accumulation within cells of mutations in the DNA , coupled with decreased efficiency of the cellular DNA repair mechanisms. In addition the immune system, which may play a role in eliminating early cancerous cells, also decreases in efficiency with age and this may lead to a failure to eliminate malignant cells as they arise. 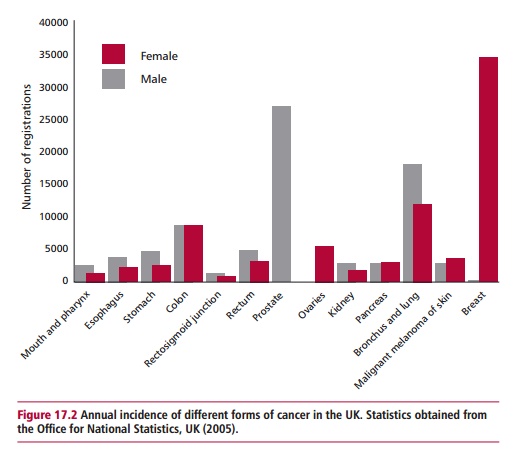 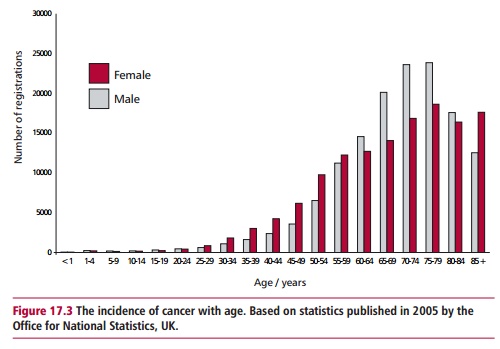