The deleterious effects of the aging processes are numerous and diverse. They affect cells, tissues, organs and systems.

The deleterious effects of the aging processes are numerous and diverse. They affect cells, tissues, organs and systems.

Cellular functions decline in efficiency with advancing age. For example, the abilities of mitochondria to survive a hypoxic insult and perform oxidative phosphorylation, the synthesis of structural, enzyme and receptor proteins, the abilities of cells to take up nutrients and repair chromosomal damage all decline with age. Aged cells also have irregular and abnormally shaped organelles, particularly nuclei, Golgi apparatus and endoplasmic reticulum and accumulate waste products.

All tissues are affected with age. For example, muscle mass is subject to a condition known as muscle atrophy due to a reduction in size of muscle groups and to losses of individual muscle fibers. This results in a decreased capacity for work. Other factors, such as cardiovascular, respiratory and joint functions, also influence muscle strength. If the elderly are disabled by disease, for example, arthritis, mobility may also be restricted and muscles will atrophy unless specific exercises are undertaken.

Age-related changes to organs include a decrease in the size and activity of several major organs. There is a decrease, for example, both in the size and elasticity of the lungs, resulting in a reduced gas exchange capacity. In general, the function of the lungs is still sufficient for most activities although the capacity for strenuous activity will be reduced due to a decline in cardiovascular function .

The weight and volume of kidneys may decrease between 20–30% with age as nephrons are lost and replaced by scar tissue. This results in a decrease in the rate of filtration and hence the excretory capacity . Older people are thus more at risk of developing renal disease.

The liver also shrinks in size due to loss of cells. There is a concomitant decline in some liver functions especially in the metabolism and detoxification of drugs and xenobiotics . This is clinically significant because it means that many medications are metabolized and cleared from the body more slowly, a fact that must be taken into account when prescribing drugs for the elderly.

Loss in the function of sense organs occurs with age. A decline in the ability of the lens to change shape makes focusing on near objects more difficultand wearing of spectacles becomes a necessity. Changes also occur in the lens proteins, the crystallins, causing them to become more cross-linked and browner in color. This results in more scattering and absorption of light, with less light reaching the retina. With age there is also a general physiological deterioration of the auditory system.

The brain loses weight with age, reducing from a typical mass of 1.4 kg at 20 years of age to about 1.3 kg at the age of 60. The loss is due to changes in composition that include an enlargement of the ventricles and a widening of the surface channels. Nerve cells are also lost and amyloid protein may be deposited. An accumulation of the pigment lipofuscin also occurs in certain neurons. These changes are believed to be responsible for a lengthening in reaction times, a decline in problem-solving and learning abilities and an impairment of memory.

Changes to the skin are among the most easily recognized effects of aging (Figure 18.2). Indeed, many people use the appearance of skin and hair to assess the age of an individual. These changes include wrinkling, changes in skin pigmentation and graying and loss of hair. Skin wrinkling is caused by changes to collagen, with increased cross-linking and a reduction in elasticity. The follicles producing gray hair lack the pigment-forming melanocytes. There is a large variation in hair loss that is not surprising given the many genetic and hormonal influences involved. 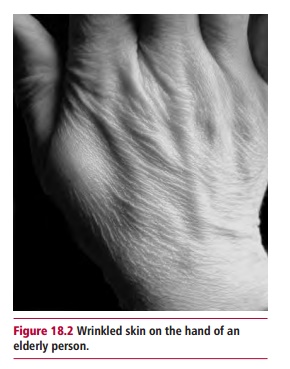 Skin wounds heal more slowly in older individuals. Studies have compared healing of ischemic (reduced blood flow) and fully vascularized wounds in young and old rats. The fully vascularized wounds healed equally well in both populations whereas ischemic wounds took significantly longer to heal in older animals. It may be that impaired wound healing in older people may be related to diseases, such as atherosclerosis, or hardening of the arteries, which contributes to ischemia of the wounded tissue .

There is evidence to suggest that endocrine function declines with age because of a reduction both of hormone production and of the numbers of hormone receptors on target cells. For example, there is an age-related decline in the functions of the reproductive organs, altered thyroid hormone status and an increase in the risk of developing diabetes .

Immune function also declines with age. The thymus atrophies and there is a progressive decline in the function of T lymphocytes . There is a concomitant decrease in the production of antibodies, possibly due to loss of regulatory T cell function together with an increase in the development of autoimmune reactions, leading to an increased susceptibility to infections in the elderly coupled with autoimmune injury to cells and tissues.

Numerous well-documented defects may occur in the cardiovascular system as it ages. Connective tissues, which are essential components of blood vessel walls, lose elasticity and this increases the rigidity of the vessels. Blood vessels are also prone to calcification and hardening of the arteries leading to atherosclerosis . The narrowing of the lumen of blood vessels by arteriosclerosis leads to an increase in blood pressure in the elderly. With age, the heart muscle also becomes less efficient and the heart enlarges due to accumulation of fibrotic tissue, leading to a decline in cardiac output. A consequence of these changes is a reduced delivery of blood to peripheral tissues and to the heart itself.