Aging is difficult to define but is perhaps most widely understood to be adecrease in the ability to survive.

Aging is difficult to define but is perhaps most widely understood to be adecrease in the ability to survive. As people age (Figure 18.1), they are less able to perform strenuous physical activities which were relatively easy when they were younger. With aging comes a decline in the function of most organs in the body, making elderly people more susceptible to disease. Indeed, most major diseases of the developed world, such as coronary heart disease , cancer , and diabetes type 2 are age-related. With aging comes senescence, that is, a decline in functions of almost all parts of the body and at all levels of organization, from cells to organ systems. Senescence changes may be responsible for some disease of old age or may increase susceptibility to certain diseases. Thus elderly people make up a large proportion of patients in hospitals and in most countries a high proportion of the health budget is devoted to the care and treatment of the elderly. 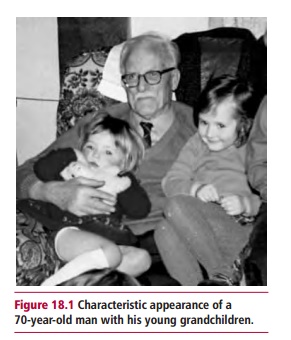 The average length of life of individuals in a population is known as the lifeexpectancy. Life expectancy has increased over the past 100 years in theUK from 46 years in 1893 to 78 years in 2004. This increase has been due to developments in modern medicine, as well as to improvements in public health care, nutrition and housing. The increase in life expectancy has resulted in an enormous expansion of the elderly population in all industrialized countries, though this is less marked in developing countries. However, although the life expectancy has increased over the last 100 years, the human life span, that is, the maximum age that can be attained by members of a particular species, has not. Humans can live up to the age of about 120 years, but such longevity is exceptional. Humans live longer than other mammals: an elephant, for example has a life span of 70 years, while that of a mouse is a mere three years. While the life span of species is inherent, humans are able, to a certain extent, to increase their life expectancy by controlling their environment.