Factors that may contribute to causing disease in the elderly include the physiological and biochemical changes associated with normal aging, the cumulative exposure to harmful agents, and an increased sensitivity to agents or the environment. A number of diseases in particular show an increased incidence in older people. These include cancer, cardiovascular disease, type 2 diabetes, cataracts, arthritis, Parkinson’s disease and Alzheimer disease. The latter, and Hutchinson-Gilford syndrome, which affects children..

In general, the incidence of most cancers increases with age (Figure 18.10) with more than half of all cancers occurring in people over the age of 65 years. Two main hypotheses have been proposed to explain the link between cancer and age. First, an age-related accumulation of carcinogenic substances may increase the incidence of cancers in the elderly. This process is independent of the senescence changes described above that occur in the aging body. The second hypothesis proposes that age-related changes may make cells more vulnerable to becoming cancerous. Changes in immune, nutritional, metabolic and endocrine status occur with age and may create a more favorable environment for the induction of cancer. Such physiological changes may affect a number of cell processes such as the detoxification of mutagenic agents and the repair of damaged DNA . 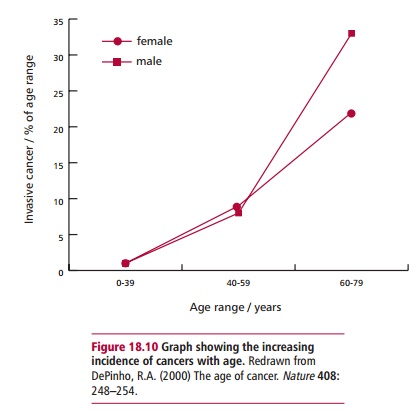 Many of the changes in the cardiovascular system may be caused by disease rather than old age per se. The concentration of cholesterol in the plasma increases with age. Elevated levels over the years are thought to contribute to the high incidence of mortality from coronary heart disease especially if other risk factors are present. This risk may be decreased by changes to lifestyle, since eating an inappropriate diet, smoking and lack of exercise are known to be associated with atherosclerosis.

Many older people have some degree of impaired glucose tolerance that can be severe enough to be classified as type 2 diabetes mellitus. The main reason for high concentrations of blood sugar in the elderly is increased resistance to the effects of insulin in peripheral tissues that is associated with increased insulin levels after a meal. Diabetes in older people is strongly influenced by diet and exercise.

A cataract is a partial or complete opacity of the lens of the eye that causes blurred vision. This affects the passage of light through the lens causing blindness. There are many different types of cataracts but one of the most common is senile cataract. Another risk factor for cataract is diabetes. Cataracts are treated by removal of the opaque lens and its replacement with a plastic lens.

Arthritis is inflammation of the joints producing swelling, pain and restricted movement. Osteoarthritis affects the joint cartilage and underlying bone. It is particularly associated with increasing age, although it can occur in younger individuals who excessively use their joints in work or athletic activities. Osteoarthritis affects fingers, hip joints and knees (Figure 18.11(A)) but, unlike rheumatoid arthritis, does not always cause pain and inflammation. X-raying of joints usually shows some degree of osteoarthritis in nearly all elderly patients although few present with any symptoms. In severe cases, the joints of the fingers often show overgrowth referred to as Heberden’s nodes (Figure18.11(B)) although these tend not to be painful. Osteoarthritis cannot be curedalthough mild exercise can improve joint mobility. 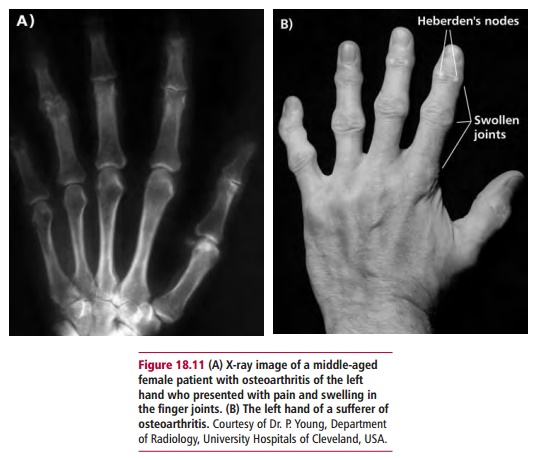 Rheumatoid arthritis is characterized by a chronic inflammation of the joints that usually arises from an autoimmune reaction . It is also more common in the elderly, although its onset can occur in any age group. The result is severe pain and disability. What initiates rheumatoid arthritis is not clear although a variety of bacteria, especially mycobacteria, have been implicated. The treatment of rheumatoid arthritis involves using nonsteroidal anti-inflammatory drugs. The surgical replacement of hip or knee joints may also be required in patients who become severely disabled.

Parkinson’s disease affects between 1 and 2% of individuals over the age of 70. The major defect in Parkinson’s disease is degeneration of dopamine-secreting nerve cells although other neurons and neurotransmitters may also be affected. Patients have severe attacks of tremors that affect one hand and then spread to the leg on the same side and then to other limbs. The average survival time is eight to 10 years after diagnosis. Parkinson’s is distinct from Alzheimer’s disease in that different nerve cells are affected and there is loss of motor function, which is usually unaffected in Alzheimer’s disease. A further feature of Parkinson’s disease is the presence of cytoplasmic inclusions called Lewy bodies in some of the surviving neurons. Some researchers believe that an excess of free radicals causes the degeneration of these neurons.