Causes of Aging: Wear and Tear, Genome Based Theories

A number of theories have been proposed to explain cellular aging. These theories can be divided into two broad groups: those that are based on ‘wear and tear’ and those that propose a genetic basis.

A number of theories have been proposed to explain cellular aging. These theories can be divided into two broad groups: those that are based on ‘wear and tear’ and those that propose a genetic basis.

‘Wear and tear’ theories suggest that aging processes in cells are due to a continual exposure to harmful agents from both inside and outside the cell throughout life. These agents include: free radicals, glycated proteins, waste products and products of erroneous biosynthesis, the error-catastrophe theory.

Free radicals are molecules that have an unpaired electron. This makes them highly reactive although they can be stabilized by the donation of electrons to, or removal from, other molecules. As a result of this process new radicals are produced and a chain reaction can be propagated. Free radicals are produced in phagocytic cells in processes aimed at destroying pathogens. They may also be produced during endogenous enzymatic reactions, especially oxidation– reduction reactions associated with hyperglycemia or following exposure to tobacco smoke or ionizing radiation.

The most studied free radical in vivo is the highly reactive hydroxyl radical (OH•) formed by the action of ionizing radiation and from some intermediatesin biochemical processes. The superoxide radical (O2•) is less toxic and is produced, for example, by metabolic reactions of the electron transport chain where oxygen is normally reduced to water by accepting electrons. During this process, a small proportion of this oxygen can be released as the superoxide radical after having accepted only one electron: 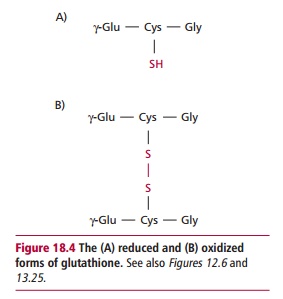 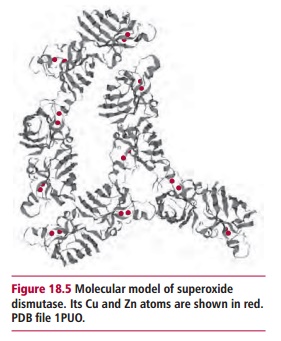 While phagocytes routinely produce the superoxide radical as part of their antibacterial defence, it has been estimated that each cell in the body is exposed to attack by around 10 000 free radicals per day. This sustained exposure is thought to cause progressive damage to cells. The damaging chain reactions cease when two radicals meet and form a covalent bond, or when they react with a molecule that acts as a free radical trap. The latter includes vitamin E which acts as a free radical scavenger and, by virtue of its lipid solubility, may help to prevent damage to biological membranes. Glutathione (GSH), a tripeptide present in most cells, contains a thiol (–SH) group that is readily oxidized (Figure 18.4). Glutathione is usually maintained in a reduced state in the cytosol of cells and protects against free radical damage. The enzyme superoxide dismutase (Figure 18.5) removes superoxide radicals by converting them into hydrogen peroxide and dioxygen. The hydrogen peroxide is then oxidized to water by the catalase (Figure 18.6):

There is evidence that dietary antioxidants, such as vitamins E and C may delay the aging process and increase life expectancy in rats, mice and some nonmammalian species but it is not known whether they act solely by reducing free radical damage. 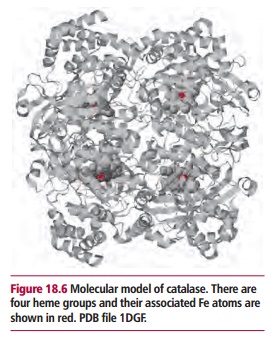 Both intra- and extracellular proteins are subject to posttranslational changes during aging. For example, proteins exposed to reducing sugars may undergo glycation. This occurs as a nonenzymatic reaction between free carbonyl groups of reducing sugars in their acyclic form and amino groups of the protein to form a Schiff base in a freely reversible reaction (Figure 18.7). The Schiff base is unstable and rearranges to a more stable Amadori product, the reaction being effectively irreversible. 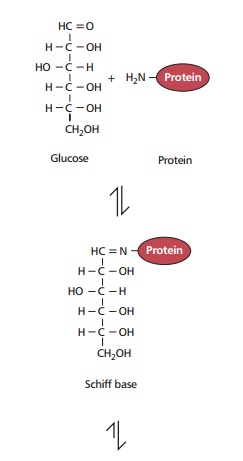 The extent of glycation in vivo depends on the degree and duration of hyperglycemia. Glycated proteins may undergo further reactions to form cross-linked fluorescent structures called advanced glycation end products (AGEs). Advanced glycation end products accumulate with age, particularly on structural proteins, such as collagen which has a long half-life, and they can cause increased cross-linking of individual proteins. Such changes have deleterious effects since excessive cross-linking decreases the elasticity and permeability of the extracellular matrix and impairs the flow of nutrients into and waste products out of cells. Since a high proportion of the elderly population have diabetes or impaired glucose tolerance , their proteins are more likely to be glycated.

During aging, increasing amounts of waste material accumulate in the cytoplasm of cells. Many of these are waste products of normal cellular metabolism. For example,lipofuscins are yellow-brown pigments produced by degeneration of cell membranes and organelles, probably by the free radical peroxidation of membrane lipids. Lipofuscins accumulate with age in many types of cells, particularly nondividing cells such as those of muscle. Lipofuscins are chemically inert, strongly cross-linked molecules that are stored in lysosome-like structures (Figure 18.8). They are not susceptible to enzymatic digestion by the lysosomal enzymes . It has been suggested that a gradual accumulation of substances like lipofuscins within cells interferes with their normal function, though there is no conclusive evidence for this. Furthermore, there is no correlation between the amount of lipofuscin accumulated and the reduction in cell function and survival. 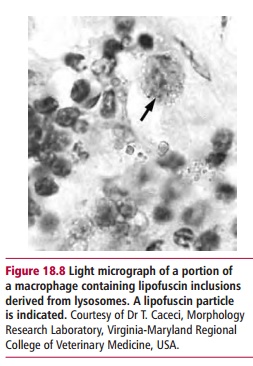 The error-catastrophe theory suggests that cellular dysfunction and, ultimately, cell death arises due to an accumulation of abnormal proteins. Protein synthesis involves transcription of DNA to give mRNA, which is transported to the cytoplasm and is translated to form polypeptides. Random errors in transcription and/or translation will lead to formation of abnormal proteins whose accumulation might impair cellular function. If the protein in question is an enzyme, such an error may lead to a malfunctioning enzyme and cellular dysfunction. Although enzyme activity is known to decline with aging, it has not always been possible to demonstrate any changes in enzyme structure with age. It seems that proteins are synthesized appropriately in older cells and most subsequent changes to their structures occur posttranslationally.

Some studies have indicated that certain enzymes have a changed conforma-tion in an older cell. This suggests that enzyme molecules retained inside the cell for long periods are slowly denatured and consequently lose their biological activity. In younger cells, the original shapes of proteins can be restored by cycles of denaturation followed by renaturation. Weak interactions that confer shape to the denatured form of protein molecules are broken, allowing them to fold back to their original shape. This process therefore corrects the defective shape of denatured enzymes and produces molecules that are as efficient as a newly synthesized enzyme. Unfortunately, such repair mechanisms lose their efficacy as the cell ages.

There is evidence to suggest that aging is under genetic control. A number of genetic based theories have emerged, including those that suggest programmed aging and those that propose gene mutations.

The theory of programmed aging suggests that each species has an in-built biological clock and that aging involves a genetically programmed series of events. In the 1960s, Hayflick demonstrated that cells are restricted in the number of times they can enter the cell cycle by an in-built genetic program of senescence. He showed that cultured fibroblast cells derived from human embryos could undergo 50 cell divisions, whereas those from adults were limited to about 20. In culture, the number of divisions is constant for each type of cell. This is referred to as the Hayflick limit. Furthermore, the factors that control the number of divisions are intrinsic to the cell and are not influenced by their environment. For example, if the nucleus of an old cell is transplanted into a young cell from which the original nucleus has been removed, the resulting cell has a lifespan that reflects that of the transplanted nucleus.

When cells grown in culture are frozen and then recultured, they appear to retain the memory of the number of times they have already divided in the original culture. Hence they only complete the ‘unused’ number of cell divisions. It therefore appears that there is a biological clock within all cells. This biological clock, at least in part, resides in the telomeres, which are extensions of DNA found at the ends of chromosomes (Figure 18.9). Telomeric DNA protects the ends of the DNA molecule from damage. When DNA is replicated prior to cell division, telomeric DNA does not replicate. After each cell division the telomere becomes shorter in length. Once the telomeres shorten to a particular length, the cell can no longer divide and dies. The activity of telomerase can prevent the shortening of telomeres and enable the cell to divide continuously. Most somatic cells contain an inactive form of telomerase although a number of cell types, such as hemopoietic cells and cancer cells, have a permanent telomerase activity. These cells can divide indefinitely and are therefore potentially immortal.

The suggestion that aging is genetically programmed has received some criticism. For example, the number of divisions occurring in vitro may be different from those that occur in vivo. Furthermore, some cells, such as cardiac muscle cells and neurons, do not divide after birth, and so programmed aging may not apply to these cells.

It is well known that mutations occur in genes during the lives of cells and that these mutations can alter the activities of the cells  The gene mutation theory suggests that accumulation of mutations during the course of life leads ultimately to tissue and organ malfunctions and eventually death.

Genes are composed of DNA. The cell has several mechanisms to repair damaged, that is, mutated, DNA. Enzymes within the cell excise the damaged region of the gene and add back a new set of nucleotides using the undamaged DNA strand as a template. The gene mutation theory suggests that, with time, these DNA repair mechanisms become less efficient and some mutations are not repaired leading to functional changes.

In support of this theory, DNA obtained from liver cells of older mice has been found to have a greater number of mutations compared with similar cells from younger mice. In addition, liver cells obtained from strains of mice with a short lifespan show a higher incidence of mutations compared with similar cells from a strain of mice with longer lifespan. Radiation is known to cause mutations and shorten the lifespan of cells. It has been suggested that natural radiation might accelerate the aging process.