More than 100 different drugs are used to treat different cancers. They are usually given in combination and with radiation therapy and/or surgery.

More than 100 different drugs are used to treat different cancers. They are usually given in combination and with radiation therapy and/or surgery. Most of the chemicals used in the treatment of cancer are, traditionally, those that kill cells, that is they are cytotoxic. Most are active on cells that are dividing, that is they are cycle-dependent. Drugs which kill cells that are not dividing are noncycle-dependent. There is also some evidence that at least some cytotoxic drugs act by inducing terminal differentiation or apoptosis in cancer cells. Many different types of chemicals target cell division in various ways. For example, several categories of drug interfere with DNA synthesis. These include folic acid antagonists, alkylating agents and purine and pyrimidine analogs and the topoisomerase inhibitors . Other drugs inhibit cell division by disrupting the polymerization or depolymerization of microtubules, thus interfering with the separation of chromosomes during mitosis. Unfortunately, drugs that work by preventing cell division do not discriminate between dividing cancer cells and dividing healthy cells. Thus, these drugs have considerable toxicity, particularly towards bone marrow and the epithelial cells of the skin and GIT. Thus, chemotherapy is associated with anemia, nausea and damage to the actively dividing cells of the hair follicles, leading to considerable, but usually reversible, hair loss. A role of the hospital pharmacist is to advise on treatment to minimize the discomfort caused by this therapy. In the treatment of some cancers, aggressive chemotherapy may destroy bone marrow, such that patients require a bone marrow transplant .

The route of administration of chemotherapeutic agents depends on the drug. Many drugs are administered intravenously by infusion. Others are administered intrathecally, that is, by injection into the innermost membrane surrounding the central nervous system. This is usually achieved by lumbar puncture. Administration of chemotherapy in hospitals requires the hospital pharmacist to work alongside the physician so that the most appropriate dose is administered in the most suitable manner. Some of the drugs used to treat cancer are discussed below, although this list is by no means exhaustive. It is worth noting that a natural selection process often takes place within tumors treated with chemotherapy, in that some of the tumor cells may develop resistance to the drug. In cases of drug resistance it is necessary to change the chemotherapeutic agent. 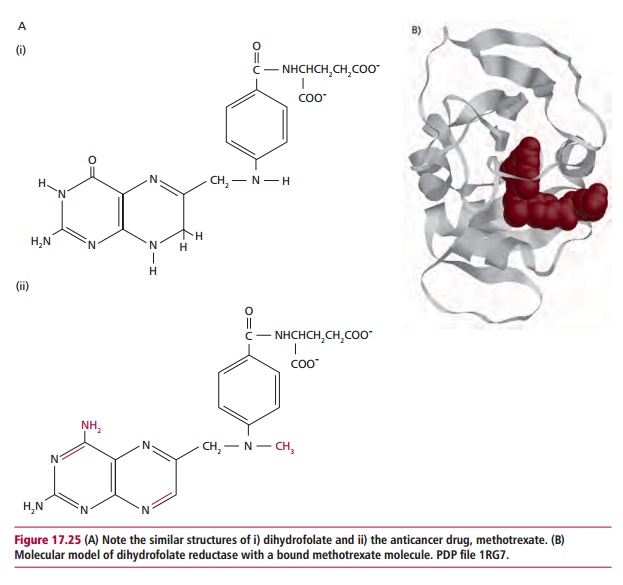 Alkylating agents that have two reactive groups are bifunctional and can cross-link two biomolecules. Cross-linking the two strands of DNA is the major cause of toxicity of these drugs since this prevents the separation of the strands which is required for the synthesis of new DNA. Examples of alkylating agents include the nitrogen mustards, such as cyclophosphamide, melphalan, ifosfamide and chlorambucil, and the nitrosoureas, for example bis-chloro-ethyl nitrosourea (BCNU; carmustine) and cyclohexyl-chloroethyl nitroso-urea (CCNU; lomustine). Some examples of their use is shown in Table 17.7. 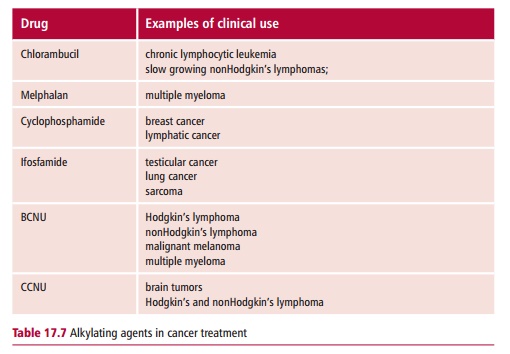 Purine and pyrimidine analogs are drugs that resemble one of the bases found in DNA and/or RNA. When present during nucleic acid synthesis, they interfere with the synthesis of DNA, though the site at which they exert their effects depends on the drug itself. Pyrimidine analogs include 5-fluorouracil or 5-FU (Figure 17.26) and cytidine arabinoside (ara-C). Purine analogs include 6-mercaptopurine (6-MP) and 6-thioguanine. Table 17.8 lists some of their uses in cancer treatment. 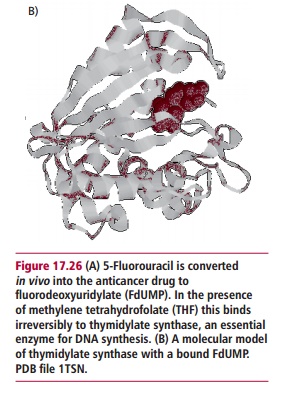 Microtubules form the mitotic spindle, which is essential for the process of chromosome separation during mitosis and meiosis. The formation of a spindle requires microtubules to polymerize from tubulin subunits, whereas separation of chromosomes requires depolymerization. Any drug which interferes with either of these processes will interfere with cell division. The first drug shown to prevent polymerization was colchicine, originally obtained from the autumn crocus, Colchicum officinale, though this is too toxic for 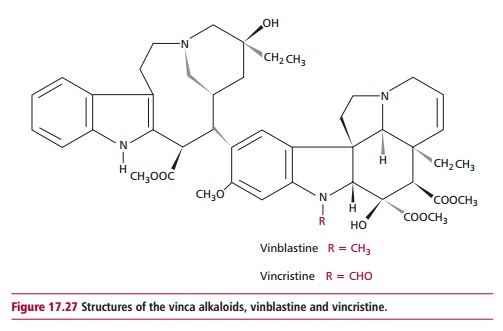 therapeutic use. The vinca alkaloids vincristine, vinblastine and vinorelbine (Figure 17.27), all derived originally from the periwinkle plant Vinca rosea, work in a similar manner to colchicine. Vinblastine is used in combination with other drugs to treat testicular cancer, while vincristine is used in treating leukemias. Vinorelbine is used in lung and breast cancer therapy. Paclitaxel, otherwise known as taxol, and docetaxel or Taxotere (Figure 17.28) are derived from the bark and needles of the Pacific yew tree, Taxus brevifolia (Figure 15.8 (B)). These drugs also target microtubules but in this case they prevent their de-polymerization. Both drugs are used in the treatment of ovarian, breast and lung cancer. 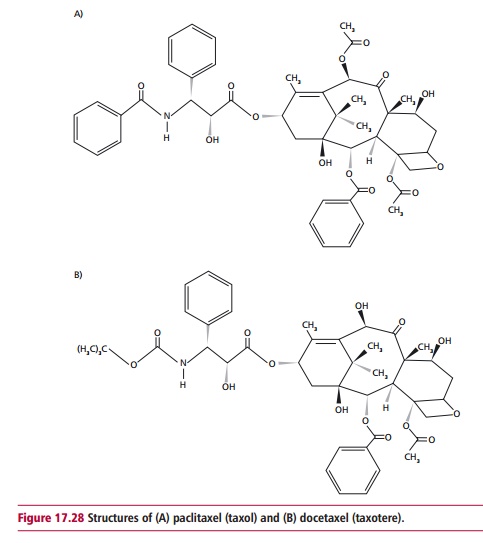 Topoisomerase inhibitors form a complex with DNA topoisomerase II and inhibit DNA replication. Examples of this class of drugs include VP-16, or etoposide, and VP-26, or teniposide, both of which are derivatives of podophyllotoxin, which is derived from the mandrake plant, Madragora. VP-16 is used in the treatment of small cell lung cancer, testicular cancer and lymphomas and VM-26 is used to treat childhood leukemia.

Cisplatin (cis-diamminedichloroplatinum) was first discovered in experiments that showed that the growth of bacteria was inhibited by an electric current delivered by platinum electrodes. This drug is now used in combination therapy to treat testicular cancer. It is also used in treating lung cancer. Other platinum-based drugs include carboplatin and oxaliplatin and all function by binding to DNA, cross-linking the strands and distorting its double helical shape (Figure 17.29 (A) and (B)). This facilitates the binding of other proteins to the DNA molecule that mediate toxicity of the drug. 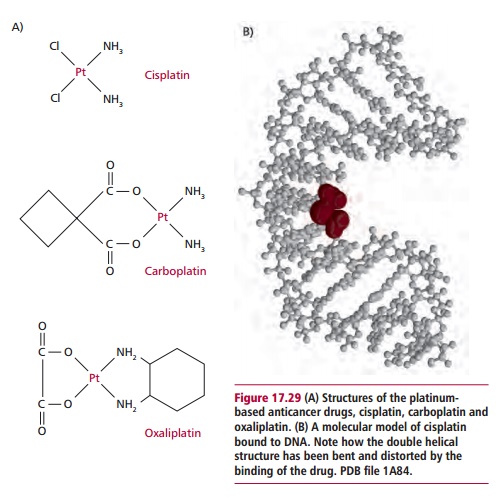 Tumor-specific molecules, on the surfaces of cancer cells may be targeted with monoclonal antibodies . In this way treatment should be more directed at the tumor and general toxicity reduced. Over the years, several approaches have been made to producing targeted therapy using these antibodies. For example, antibodies have been used to target cytotoxic drugs and toxins such as ricin directly at tumor cells, the so-called ‘Magic bullet’ therapy. However, since monoclonal antibodies are mouse immunoglobulin they stimulate an immune response in humans. Hence, antibodies have been engineered to contain mouse binding sites but which are carried on human constant regions . Examples of monoclonal antibodies currently in use are trastuzumab (Herceptin), which is licensed for the treatment of secondary breast cancer and which is directed at growth factor receptors on the tumor cells, and rituximab (Rituxan) which is used in the treatment of nonHodgkin’s lymphoma.