Diagnosis and treatment of hereditary elliptocytosis and spherocytosis

Two relatively common disorders associated with the erythrocyte cytoskeleton are hereditary elliptocytosis (HE) and spherocytosis (HS). Their incidences are variable. For example, in the USA, HS is the commonest of the hereditary hemolytic anemias among people of Northern European descent, with an incidence of approximately one in 5000, although many regard this as an underestimation. The prevalence of HE is thought to be one in 2000 to 4000. Like sickle cell anemia, which was described, the condi-tion shows a much higher incidence in areas endemic for malaria, in equato-rial Africa, for instance the incidence is approximately six per 1000. 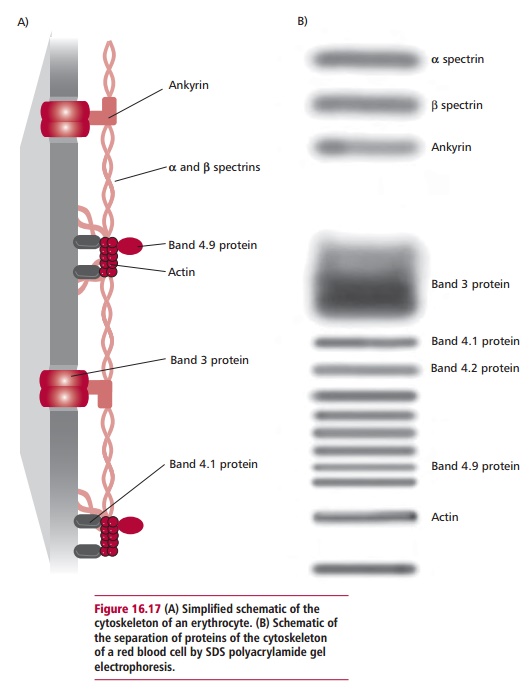 Patients with HE or HS synthesize lower amounts of cytoskeletal proteins than normal, or the proteins themselves are defective. Most cases of heredi-tary spherocytosis are caused by mutations in the ANK1, SPTB, SLC4A1, EPB42 and SPTA1 genes that encode ankyrin, spectrin P-chain, band 3, pro-tein 4.2 and @-spectrin respectively (Figure 16.17). The mutations responsi-ble for hereditary elliptocytosis occur in the SPTB and SPTA1 and the EPB41 gene encoding protein 4.1. These mutations mean that the erythrocytes are misshapen (Figure 16.18) and less deformable and so become trapped in the spleen where they are prematurely degraded. The consequent excessive release of bilirubin leads to jaundice and gallstones . The anemia caused by reduced numbers of circulating erythrocytes results in the release of immature erythrocytes from the bone marrow. 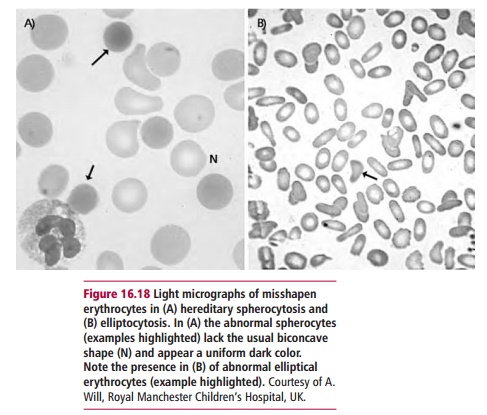 Diagnosis and treatment of hereditary elliptocytosis and spherocytosis

The simplest way to test for HE and HS is the microscopic examination of peripheral blood smears to observe the misshapen erythrocytes (Figure16.18). Other tests include demonstration of the increased resistance of theerythrocytes to osmotic shock using the osmotic fragility test, observation of reduced fluorescence following staining with eosin-5-maliemide and determination of the amounts of cytoskeletal proteins present following their separation by electrophoresis.

General treatments include daily ingestion of folate when hemolysis is significant, and blood transfusions. The symptoms of HE and HS are alleviated by surgical removal of the spleen (Table 16.6). This increases the time the defective erythrocytes stay in the circulation to about 80% of that of a normal erythrocyte.