Defects in these proteins compromise the mechanical strength of the muscle fibers leading to their rupture and death during years of contraction, hence MDs are characterized by a progressive wasting of the muscle tissues.

Mutations involving the genes for dystrophin, its associated transmembrane complex proteins or the @2 laminin of the basal lamina lead to genetic disorders called muscular dystrophies (MDs). 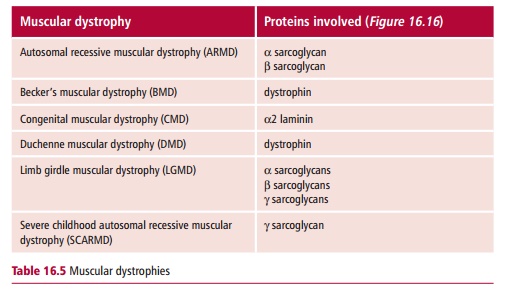 The incidences of MDs vary depending on the specific type. Duchenne MD is the commonest with an incidence of three in 10 000 live-born males. Becker’s MD is the second most common form, at one per 30 000 live male births. Other types of MD are rare. For example, limb-girdle dystrophy occurs in only about 1% of patients with MDsDuchenne and Becker’s MDs are caused by different mutations in the gene for dystrophin. Mutations that produce STOP codons or deletions of even rela-tively small portions that change the reading frame lead to DMD. Surprisingly, BMD is the result of much larger deletion mutations but the reading frame of the rest of the gene is unaltered, leading to the production of defective dys-trophin. This, apparently, is sufficient to protect the muscles from degenerat-ing as badly or as quickly as is the case with DMD. The gene for dystrophin is located at Xp21  Thus both DMD and BMD are inherited in an X-linked recessive manner although up to 30% of cases of DMD are the result of a de novo mutation. Like all X-linked recessive characters, the presence of the gene in a male will lead to the development of symptoms because of the absence of a homologous, normal gene on the Y chromosome. Heterozygous females will be carriers and generally symptomless, although a number do show mild symptoms. Only in the unlikely event of a female being a homozy-gote, with two X chromosomes carrying a mutated gene, will females present with the disease.

Duchenne MD is a rapidly progressive disease characterized by loss of mus-cle functions that are associated with the muscle tissue wasting. This begins in the legs and pelvis and progresses to the shoulders and neck followed by the respiratory muscles. The course of DMD is fairly predictable, in that it follows an aggressive and progressive course. Symptoms usually appear in male children aged one to six years. Boys with the disorder are often late in learning to walk. In toddlers, it may present with enlarged calf muscles and a clumsy, unsteady gait. The initial enlarged muscle mass of the calf muscles is a compensation for loss of muscle strength. However, the enlarged muscle tissue is eventually replaced by fat and connective tissue (pseudohypertro-phy). Muscle contractures occur in the legs, rendering the muscles unusable as muscle fibers shorten and fibrosis occurs in connective tissue. Intellectual impairment may also occur although it is not inevitable and does not worsen as the disorder progresses. At school age, there is trouble climbing stairs and the child may walk on his toes or the balls of his feet and can easily fall over. Characteristically, the belly is stuck out and shoulders held back to maintain balance. Nearly all children with DMD lose the ability to walk between seven and 12 years and, by 10, braces may be required for walking. Bones develop abnormally leading to skeletal deformities of the spine and other areas. In the early teens, or earlier, the heart and respiratory muscles may also be affected. Cardiomyopathy is commonly present, but signs of congestive heart failure or arrhythmias are rare. The muscular weakness and skeletal deformities frequently lead to breathing disorders, including pneumonia. The aspiration of food or fluid into the lungs is common during the later stages. Death usually occurs by age 25, typically from these respiratory disorders.

The symptoms of BMD are considerably milder than those of DMD. They usually begin about the age of 12 or in early adulthood. The pattern of development resembles that of DMD although the course is slower and far less predictable. Generally, muscle wasting begins in the legs and pelvis and then progresses to the muscles of the shoulders and neck, followed by loss of arm muscles and respiratory muscles. Calf muscle enlargement (pseudohypertrophy) is again apparent. The rate of muscle tissue degeneration in BMD varies greatly. Some men require wheelchairs by their thirties, others manage for many years with minor aids, such as walking sticks, and, indeed, the ability to walk may continue to the age of 40 or over. Cardiomyopathy is less common than with DMD. If it does occur, then, like DMD, congestive heart failure or arrhythmias are rare. Death usually occurs in the fifth decade but some patients live to an advanced age.

Diagnosis and treatment of muscular dystrophies

A diagnosis of MDs begins with a family history and physical examination. The pattern of weakness can be particularly helpful and usually the source of weakness, whether in motor neurons or muscle tissue, can be identified by a physical examination. Nerve conduction studies can indicate whether the underlying problem is in the muscles or the nerves. However, an electromyography (EMG) measures the electrical activity of the muscles and can show if the weakness is caused by destruction of muscle tissue. Another early diagnostic test would be to measure creatine kinase (CK) activity of the blood to assess any leakage of the enzyme from damaged muscle. An increase in CK levels is seen in MDs but also in other conditions, such as an inflammation. A magnetic resonance (MR) scan can be useful in visualizing intramuscular activity. Genetic testing and a muscle biopsy can confirm a diagnosis and both are essential since other diseases, such as limb-girdle MD and spinal muscular atrophy, present with some of the same symptoms. Biopsy material can also distinguish MDs from inflammatory and other disorders as well as identify the type of dystrophy present. Diagnostic tests using DNA of blood or muscle cells can give precise clinical information, and their use is expanding. A diagnosis of BMD is often not made until adolescence or even adulthood, when physical activities become difficult.

There are no known cures for DMD or BMD. In both diseases, the goal of treatment is to control the symptoms to promote the quality of life. Inactivity, such as prolonged bed rest, generally worsens muscle disease and so physical activity is encouraged. Physiotherapy may be helpful in maintaining muscle strength and coordination. Orthopedic appliances, for example leg braces, walking sticks and wheelchairs, may improve mobility and the ability for self-care. However, associated stress means that a support group where members pool common experiences and problems can be of use. Genetic counseling is advisable, especially if there is a family history of the disorders. Note that sons of a man with BMD (or DMD) will not develop the disease but daughters can be carriers. An amniocentesis and appropriate genetic studies means that DMD is detectable with an approximately 95% accuracy during pregnancy.