The nucleus contains the genome of the cell stored as sequences of nucle-otide bases in DNA molecules most of which are contained in chromosomes  Other than a few mitochondrial genes, all the human genes are found here. Surprisingly, it seems that less than 5% of the three billion pairs of nucleotides constitute the less than 30 000 genes of humans. The rest of the DNA is found interspersed as introns in between individual genes and as repetitive sequences. The function of these short sequences is unknown, although telomeres stabilize the ends of chromosomes and centromeres allow the spindle to attach to the chromosomes during cell division. 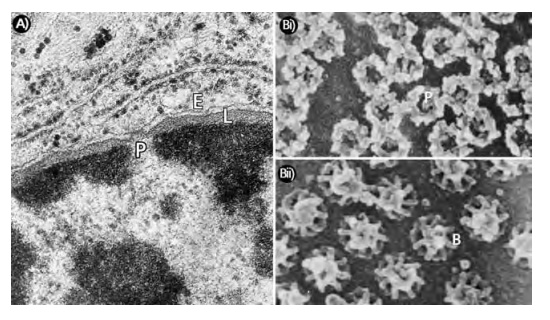 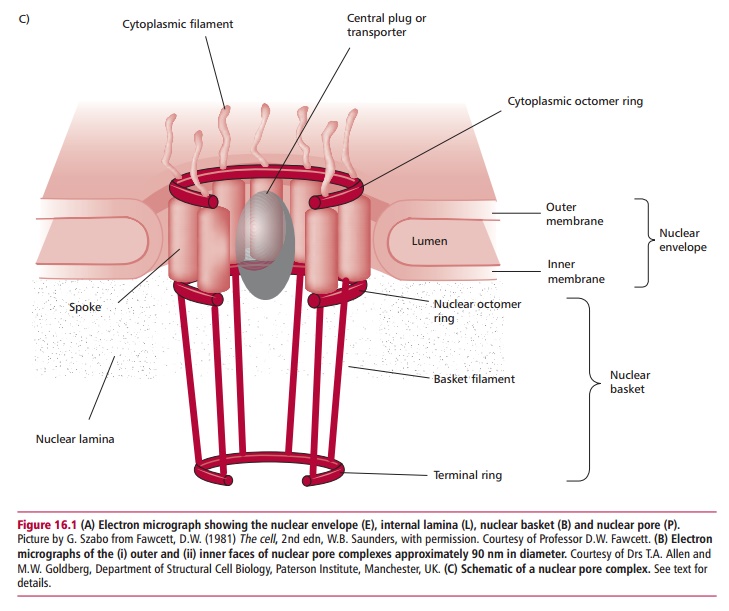 All cells, with the exception of mature mammalian erythrocytes, possess a nucleus that contains the chromosomes. The nucleus is separated from the cytoplasm by anuclear envelope consisting of outer and inner nuclear mem-branes (Figure 16.1). Nuclear pores in the envelope (Figure 16.1 (B) and (C)) allow the transport of proteins into the nucleus and the export of ribosomal subunits, transfer RNA and messenger RNA molecules to the cytoplasm. This movement between the nucleus and cytoplasm is called nucleocytoplasmictransport. Nuclear pores have elaborate structures called nuclear pore com-plexes (NPCs) that regulate nucleocytoplasmic transport. The best studied NPCs are those from amphibians, such as the toad Xenopus laevis. Each NPC consists of around 100 proteins and has a Mr of approximately 125 x 106. These complexes are cylindrical with a ring-like structure of eightfold symmetry con-taining a central core. Fibrils, 50 to 100 nm long, extend from the cylinder into the cytoplasm while the inner surface has a basket-like attachment extend-ing into the nucleoplasm. The 5600 pores of a typical mammalian nucleus are held in place by attachments to the nuclear envelope and to a scaffold of fibrous proteins called the lamina that lines and supports the inner face of the nucleus (Figure 16.1(A)). 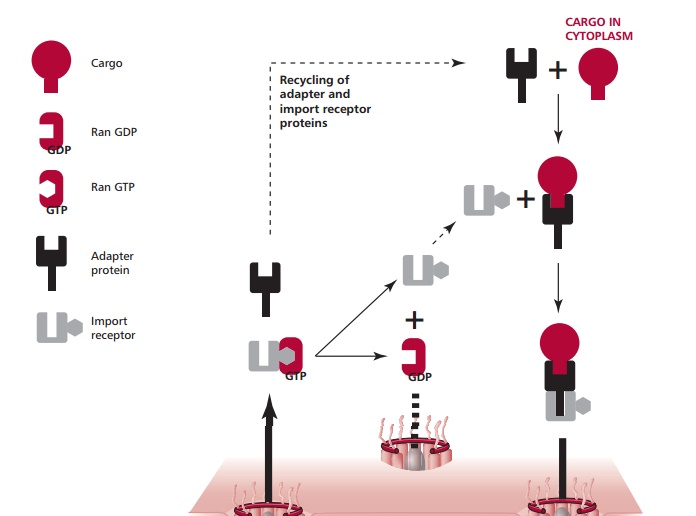 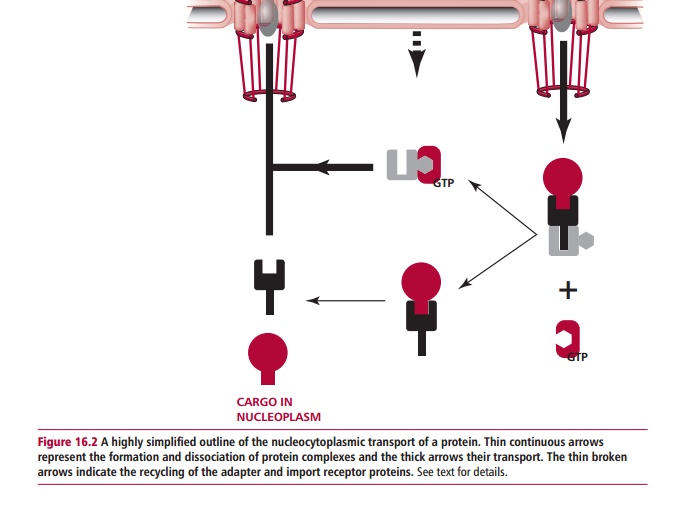 Nucleocytoplasmic transport is a rather complicated process and only a sim-plified view of protein import is given here (Figure 16.2). Generally, proteins with a Mr larger than 30 000 cannot enter the nucleus by free diffusion but they can enter by active transport if they have a nuclear locating signal (NLS). This also requires the participation of a number of soluble import factors. The best known NLSs are rich in basic amino acid residues, such as that of the large T antigen of the simian virus 40 which has a sequence: Pro-Lys-Lys-Lys-Arg-Lys-Val. A protein with a NLS is called a cargo. An adapter protein recognizes the NLS signal of the cargo and binds to it. This complex then binds to an import receptor (Figure 16.2). Importin @ and importin A are the best characterized adapter and import receptors respectively. This tripartite complex then passes through a NPC into the nucleus where it binds to a small protein called Ran. Ran is a GTPase, which can bind and then hydrolyze GTP to GDP. The con-formation of Ran depends upon whether it has a bound GTP or GDP. The binding of Ran-GTP to the complex releases the cargo-adaptor in the nucleus and allows the import receptor-Ran-GTP to be shuttled to the cytoplasm. The adapter now releases its cargo within the nucleoplasm. Within the cytoplasm, yet another protein, GTPase-accelerating protein (Ran-Gap, not shown in Figure 16.2 for the sake of clarity) stimulates Ran to hydrolyze its bound GTP.The conformation of Ran-GDP has only a low affinity for the import receptor, which is then released and can participate in a new cycle of nuclear import. The Ran-GDP is returned to the nucleus where it releases its GDP and binds a fresh GTP under the influence of a specific guanine nucleotide-exchange fac-tor (Ran-GEF). The adapter in the nucleus binds to a nuclear export receptor that allows it to be returned to the cytoplasm.

The export of proteins, transfer RNA molecules and ribosomal subunits from the nucleus to the cytoplasm appears to operate by similar mechanisms to that described above for nuclear import. The export of mRNA molecules, how-ever, seems to involve an mRNA exporter protein that directs their passage through the NPCs.

Given that NPCs are the pivotal junctions between the cytoplasm and the nucleus, they are closely involved in the pathology of viral infections . Virus particles fuse with the plasma membrane or are taken up into the cells by endocytosis. However, they must leave the cytoplasm and enter the nucleus. For example, the hepatitis B virus (HBV) has a capsid of diameter 32–36 nm and is small enough to cross the NPC directly. In vivo, phosphorylation of HBV capsids makes their NLSs accessible to the nuclear transport machinery. Following their transport through the central pore of the NPC, capsid protein and DNA from mature viruses are released into the nucleoplasm. In contrast, adenovirus particles and herpes simplex virus (HSV) have capsids with diameters of 90 nm and 125 nm respectively that are too large to traverse the NPC. These virus particles dock at the cyto-plasmic side of the NPC in an importin dependent manner. The HSV then releases its DNA through the NPC into the nucleoplasm. Adenovirus parti-cles, however, first trap a variety of transport factors that are necessary for the subsequent disassembly of the capsid before the translocation of the viral DNA into the nucleus is possible.

Malfunctions of nucleocytoplasmic transport are associated with a number of diseases including Huntington’s disease  In Huntington’s disease, a single gene is mutated and the corresponding protein, huntingtin, accu-mulates in the nucleus rather than in the cytoplasm. Nuclear pore complexes have also been implicated in several autoimmune diseases that are caused by autoantibodies recognizing proteins of the NPCs. This con-tributes to a number of diverse illnesses, such as systemic lupus erythema-tosus, rheumatoid arthritis and primary biliary cirrhosis. Nucleoporins have been implicated in several types of cancers . In some cases, these are associated with the overexpression of NPC proteins, but in most other cases tumorigenesis stems from chromosomal rearrangements that result in oncogenic fusion proteins. Examples include tumors such as acute myeloid leukemia, adenocarcinoma, chronic myeloid leukemia, inflammatory myofi-broblastic tumor, myeloblastic leukemia, osteosarcoma and papillary thy-roid carcinomas, which affect a variety of tissues. At least 11 chromosomal rearrangements in acute leukemia involve genes that encode nuclear pore proteins; nine of these involve a single protein called nucleoporin 98. Some studies have suggested that the density of NPCs in aneuploid bladder tumors that have cells with abnormal numbers of chromosomes is significantly higher than in normal cells.